LAWRENCE — The Kansas Geological Survey received annual funding from the U.S. Geological Survey to advance its county geologic mapping program. For the first year, KGS also got increased funds for additional projects that will lead to the development of a 3D geologic profile of the entire country.

Of the $428,000 the KGS received from the USGS STATEMAP program, $133,000 will be used to continue mapping in four south-central counties, and $295,000 will go for new supplemental projects. 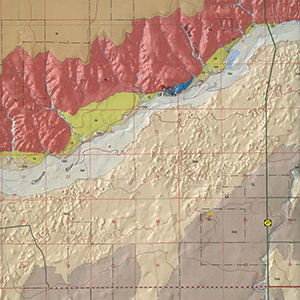 “The supplemental award supports long-term efforts to develop a national geologic mapping database,” said Jon Smith, KGS geologist and principal investigator for the project. “The database will be used to compile all of the national and regional geologic information necessary to eventually produce a 3D geologic framework for the United States.”

In support of the USGS’s National Geologic Map Database, the KGS is creating its own statewide database from thousands of Kansas geologic maps and reports. Going beyond mapping the state’s surface geology – the focus of past STATEMAP projects – KGS researchers will also construct a map of the state’s basement geology and topography.

Composed of igneous and metamorphic rocks, the basement underlies layers of limestone, shale, sandstone and other sedimentary rocks in Kansas. It ranges in depth from about 600 feet in the northeast part of the state to 9,500 feet in the southwest. 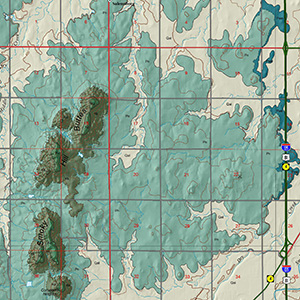 Information about the basement rock will be amassed from drilling records, rock cuttings and cores, and other resources obtained during oil and gas operations and scientific studies. Previously collected earthquake, magnetic and gravity data also will be analyzed to delineate faults in the basement, where most seismic activity originates.

“Producing a 3D map will require compilation of surficial geologic and topographic data, extensive subsurface information from boreholes, powerful GIS software, and staff with the technical skills to interpret and collate vast sums of stratigraphic data,” Smith said. “Thankfully, Kansas is well situated in these areas.” 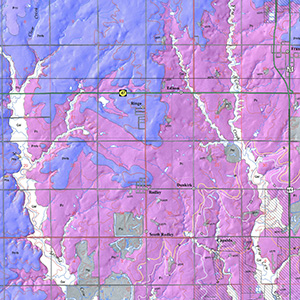 The four counties being mapped as part of the ongoing STATEMAP county geologic mapping program are Sedgwick, Harper, Sumner and Cowley. The order in which the 105 counties are mapped is based on a variety of criteria such as industrial and residential growth, environmental and cultural changes, water availability and quality, and natural-resource uses.

Sedgwick County, which includes Wichita, had a 10% increase in population between 2000 and 2010 to nearly 500,000, and an estimated population of 516,000 in 2019. Last mapped in 1991, the county has a number of natural-resource and land-use concerns. Those include urban spread, increased groundwater usage from the underlying Equus Beds aquifer and production of aggregate for road construction in the Arkansas and Ninnescah river systems.

Sumner, Harper and Cowley counties were all selected for mapping because of water-quality concerns related to contamination of shallow aquifers along streams by naturally occurring brines and brine brought to the surface during oil and gas production, then stored in surface pits. Understanding the overall geology of the counties will help planners develop clean-up operations and establish safer site locations and designs for economic enterprises.

County geologic maps available from the KGS, and an interactive geologic map of the state can be accessed online.

The STATEMAP program is part of the USGS National Cooperative Geologic Mapping Program, the primary source of funding for the production of geologic maps in the United States.

The KGS is a nonregulatory research and service division of the University of Kansas. KGS researchers study and provide information on the state's geologic resources and hazards, including groundwater, oil and natural gas, rocks and minerals, and earthquakes.