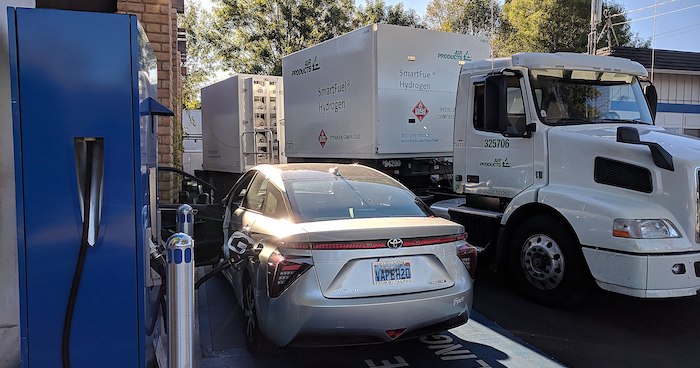 LAWRENCE — A startup firm with roots in the University of Kansas School of Engineering and Center for Environmentally Beneficial Catalysis will leverage a two-year, $750,000 Small Business Innovation Research grant from the National Science Foundation to advance technology that can broaden the popularity and ease of owning cars with hydrogen fuel cells, while also making hydrogen production friendlier to the environment. 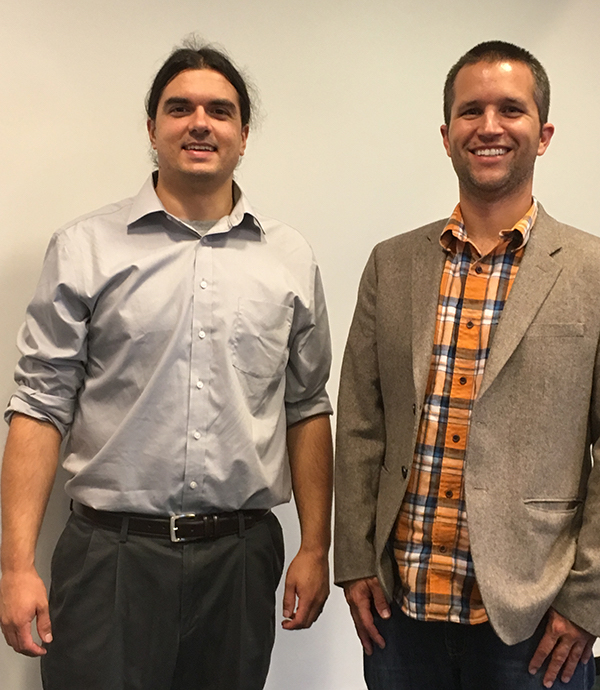 Avium LLC, headquartered at KU’s Bioscience & and Technology Business Center, is developing a Dual Element Matrix (DEM) Water Electrolyzer — a ground-breaking device to generate hydrogen from water using electricity at a much lower materials cost. The invention has potential to transform markets for hydrogen in transportation, as well as other markets, including glass manufacturing, power-plant turbine cooling, pharmaceutical manufacturing and semiconductor processing.

AviumLLC was founded in 2017 by a KU doctoral student in chemical engineering, Joe Barforoush, and his faculty mentor Kevin Leonard, associate professor of chemical & petroleum engineering. They hope to be a leading innovator in the fast-growing $100 billion hydrogen generation industry.

“Joe and I developed new materials to produce hydrogen and oxygen from water using electricity,” Leonard said. “Right now, in California and some places in Europe and in Japan, you can buy hydrogen-fuel-cell electric vehicles. Instead of being powered by a battery, they’re powered using hydrogen and a fuel cell. They have a lot of advantages, including faster charge times and a longer range. But one of the disadvantages is that the number of fueling stations is insufficient to support the number of hydrogen cars on the road in California. What we want to do is develop an on-site hydrogen generator for fueling stations for fuel-cell electric vehicles. They can essentially just take water and electricity — which is already available there — and generate hydrogen on demand instead of having a truck in from a chemical plant.”

The new NSF Phase II SBIR grant will enable Avium to build a larger prototype of the DEM water electrolyzer and perform field testing at a working hydrogen station. This new grant builds on work Barforoush and Leonard performed under a prior NSF award.

“We interviewed over 130 people in the hydrogen industry and people who own hydrogen-fuel-cell cars now in California,” Barforoush said. “People talked about shortages — there was actually a shortage while I was there. I would be at one hydrogen refueling station, and people would say, ‘This is the third station I’ve been to and I’m still not even able to get fuel here.’ There would be huge lines, sometimes with vehicles on the tow-truck beds in line because that’s part of the manufacturer’s deal — free towing if they can’t find fuel.”

Today, over 95% of hydrogen is produced from fossil fuels at chemical plants, and the majority of hydrogen at fuel cell vehicle refueling stations is trucked in from these plants — a fact the duo behind Avium hopes to change.

“Hydrogen is a commodity chemical,” Barforoush said. “The hydrogen refueling stations are at the bottom of the supply chain because they have relatively low demand right now. Chemical plants meet everyone else’s demand before supplying the fueling stations, which are kind of just out-of-luck if there happens to be a shortage. Cost-effectively producing hydrogen on-site from electricity and water could eliminate the logistical issues of delivered hydrogen while also allowing for greater utilization of renewable electricity.”

The idea of water splitting on-site using an electrolyzer isn’t a new one. However, current electrolyzers capable of producing hydrogen from water on-site are too costly due to materials required by their design. The “Dual Element Matrix” pioneered by Avium solves this problem.

“Traditionally, in order to split water into hydrogen and oxygen very expensive metals are required — things like platinum, which is very rare and very expensive,” Leonard said. “What we’ve been able to do is design a catalyst that works just as well as platinum, but uses elements such as iron and nickel and cobalt, which are much more abundant elements. It’s a materials advance that we’ve made and now we’re taking those materials and putting them into a new device. We call it the “Dual Element Matrix” because it’s a material with a matrix composition. Iron isn’t as good as platinum, nor is nickel as good as platinum, but if you mix them together in the right proportions, in the right way, they have a synergistic effect on each other. The two metals acting together gives you this improved performance.”

The work to develop the new electrolyzer will take place at the BTBC in KU’s west district, steps from the Leonard Lab in the School of Engineering and the Center for Environmentally Beneficial Catalysis. Indeed, a $130,000 sub-award of the NSF Phase II SBIR grant will go directly to KU.

“My lab is part of the Center for Environmentally Beneficial Catalysis,” Leonard said. “Our work under this new grant fits perfectly with the strategic mission of the CEBC — we’re implementing a new environmentally friendly process.”

Under the NSF grant, Avium and KU researchers will synthesize the DEM catalysts and fabricate these electrodes on an industrial scale; characterize the relationship between electrode architecture and kinetic and mass-transfer limitations; and identify the electrode architecture, stack compression and flow rates required to translate the performance of these electrodes to an industrial-sized prototype that can be tested in a California station.

Five positions at Avium will be supported through the NSF grant. Moreover, Avium’s technology holds potential to boost the regional economy along with the consumer market for hydrogen, creating more jobs in Northeast Kansas during the economic downturn triggered by COVID-19.

“This has been great in terms of both the BTBC facilities we have, but also because it enables such close collaboration with KU,” said Leonard. “Both NSF projects, the Phase I and Phase II, are joint projects between Avium and my lab at KU. So, we have the ability to have both a laboratory and an incubator space for a startup company in close proximity to the university. This has potential for some great economic impact.”

Top image: A hydrogen fueling station in Saratoga, California. The station is being supplied by a hydrogen delivery truck, but new technology from Avium LLC could make on-site hydrogen generation possible instead. Credit: Dicklyon, licensed under the Creative Commons Attribution-Share Alike 4.0 International license.

Bottom right image: Avium LLC will leverage a two-year, $750,000 Small Business Innovation Research grant from the National Science Foundation to advance its water-splitting technology that can broaden the popularity and ease of owning cars with hydrogen fuel cells, while also making hydrogen production friendlier to the environment. CREDIT: Avium, LLC.