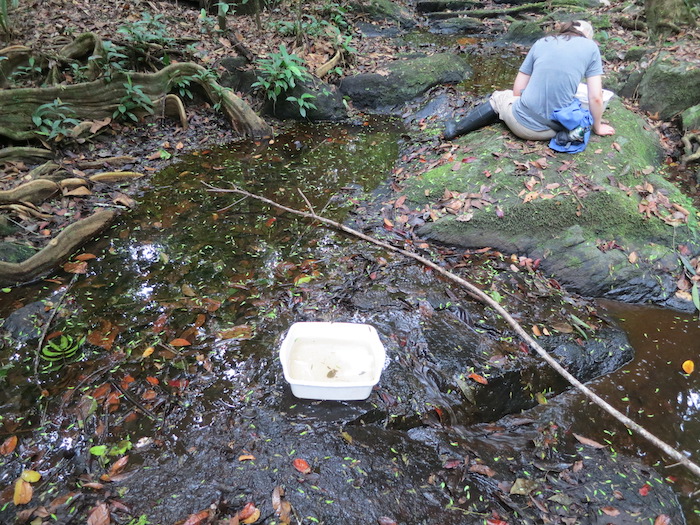 LAWRENCE — It would be striking for a seasoned entomologist with decades of fieldwork to discover such a large number of species unknown to science. But for University of Kansas student Rachel Smith, an undergraduate majoring in ecology & evolutionary biology, the find is extraordinary: Smith recently published a description of 18 new species of aquatic water beetle from the genus Chasmogenus in the peer-reviewed journal ZooKeys. 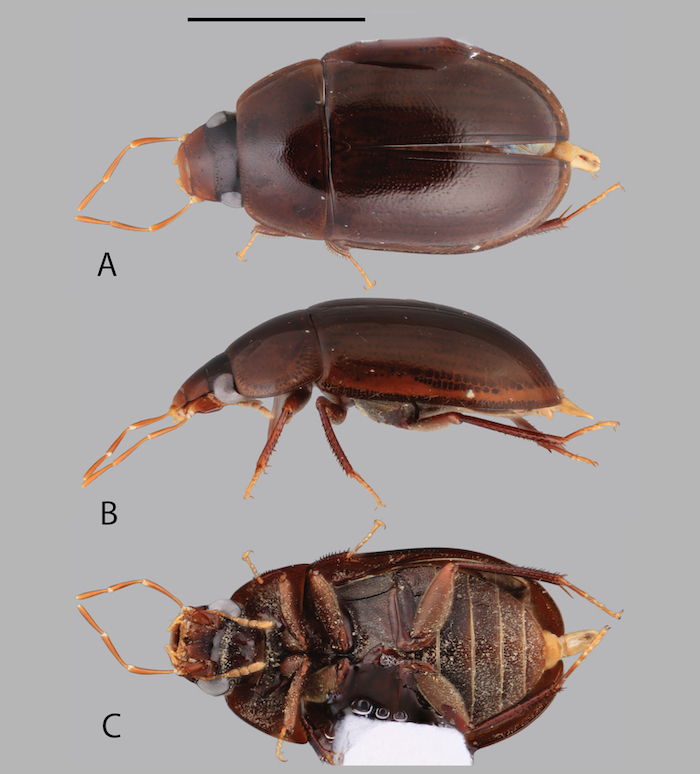 “The average size of these beetles, I would say, is about the size of a capital ‘O’ in a 12-point font,” said Smith of the collection of new species. “They spend a lot of their life in forest streams and pools. They’re aquatic, so they’re all great swimmers — and they can fly.”

The research involved Smith traveling to Suriname to perform fieldwork as well as passing countless hours in the lab of Andrew Short, associate professor of ecology & evolutionary biology and associate curator with KU’s Biodiversity Institute, who co-wrote the new paper. 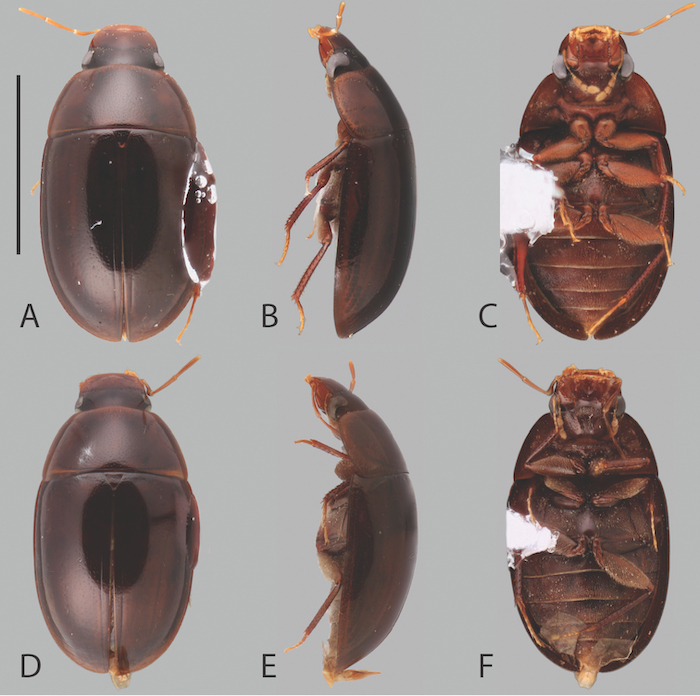 Smith said many of the aquatic beetle species are virtually indistinguishable simply by looking at them, even under a microscope.

“Something unique and fascinating about this genus, particularly the ones I worked on, is that many look almost exactly the same,” she said. “Even to my trained eye, it’s hard to tell them apart just based on external morphology. Their uniqueness is in there but kind of hidden in this very uniform external morphology.” 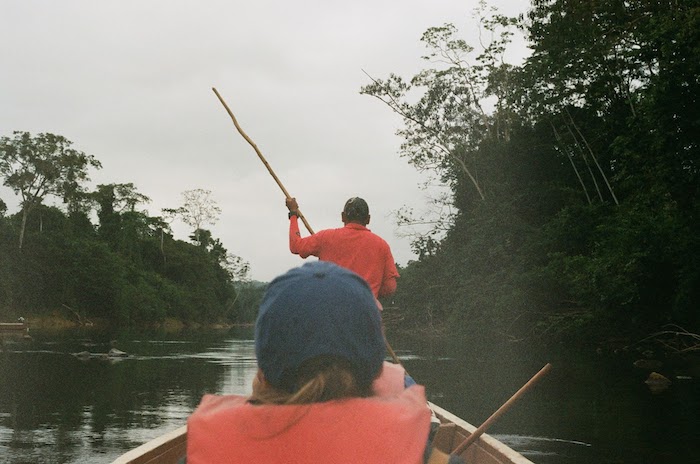 To identify the new species, Smith compared DNA evidence from the aquatic beetles with a few external morphological differences that could be observed. But this was not enough: Much of Smith’s work also hinged on dissecting these tiny specimens collected in northeastern South America to spot key differences in their internal anatomy.

“Because it’s difficult to tell them apart from external morphology, you kind of have to go inside,” she said. “I ended up doing over 100 dissections of these beetles to extract the male genitalia and look at it under a microscope. That really was the true way to tell them apart. Ultimately, it came down to male genitalia and genetic divergence that I used to delimit many of these species.” 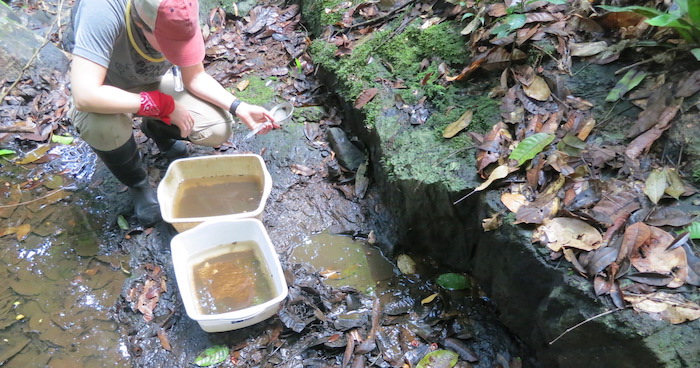 The aquatic beetles described in the new paper were collected over multiple trips to Venezuela, Suriname and Guyana. Smith herself participated in one expedition to Suriname to collect specimens.

“In Suriname, almost every day involved a boat ride down a river or kayaking to a location,” she said. “And there would have been either a short or a long hike. One day it was up an entire mountain, another day it was just a short little hike down a river trail. Well, not necessarily a trail because there aren’t trails in the rainforest. We’d find an area that had some small, slow-moving or stagnant pools. The best ones are usually still and have dead leaves and mud and detritus — that’s where a lot of these beetles are found. You definitely have to get dirty to do this work, but it’s very satisfying.”

Indeed, one of the beetles Smith and her fellow researchers discovered in the Suriname rainforest ended up being unknown to science.

“I was part of a group that collected one of the beetles that was named in this paper,” she said. “So, I was involved in the entire process of naming a species — going to the rainforest, collecting it, bring it back to the lab, naming it and describing it. It was so nice to be a part of the whole process of discovering a new species.”

Smith’s co-author and faculty mentor Short said her paper reflects two years of work and is a remarkable accomplishment for any scientist, much less an undergraduate student.

“While new species for me are common, this is quite a lot for one paper and a huge amount for a student to describe,” he said. “Rachel has done a great job. An undergraduate describing 18 species is extraordinary — it’s rare even for experienced scientists. I’ve described a lot of new species but never as many as 18 at once. This work highlights just how little we know about how many species there are in South America.”

Smith said after graduation from KU in December, her aim is to develop a career in fieldwork and research, to uncover hidden biodiversity in hopes that it can empower conservation efforts in threatened areas.

“I’ve always had my sights set on a larger picture, and conservation really is my ultimate goal,” she said. “You have to start from the bottom up, with taxonomy. You can’t really know the efficacy of any kind of conservation effort without knowing what you’re protecting or any idea of how many species are there. As I described in this paper, over half of these species are microendemic, meaning that they only occur in one specific locality. So, it begs the question — is there something unique in that area that these beetles are specializing on, and what kind of kind of niches or roles do they play in that ecosystem? Hopefully it leads to a larger conversation about taking action to get certain areas protected.”

Smith said destruction of such habitats could lead to an incalculable loss of biodiversity, but taxonomists could inform debates that pit species conservation against economic gains that come from extraction of natural resources.

“There’s deforestation and logging and a lot of gold mining in this particular area where I was at in Suriname,” she said. “But I think the take-home message from this paper really is that biodiversity is found in even in the smallest puddles in South America.”