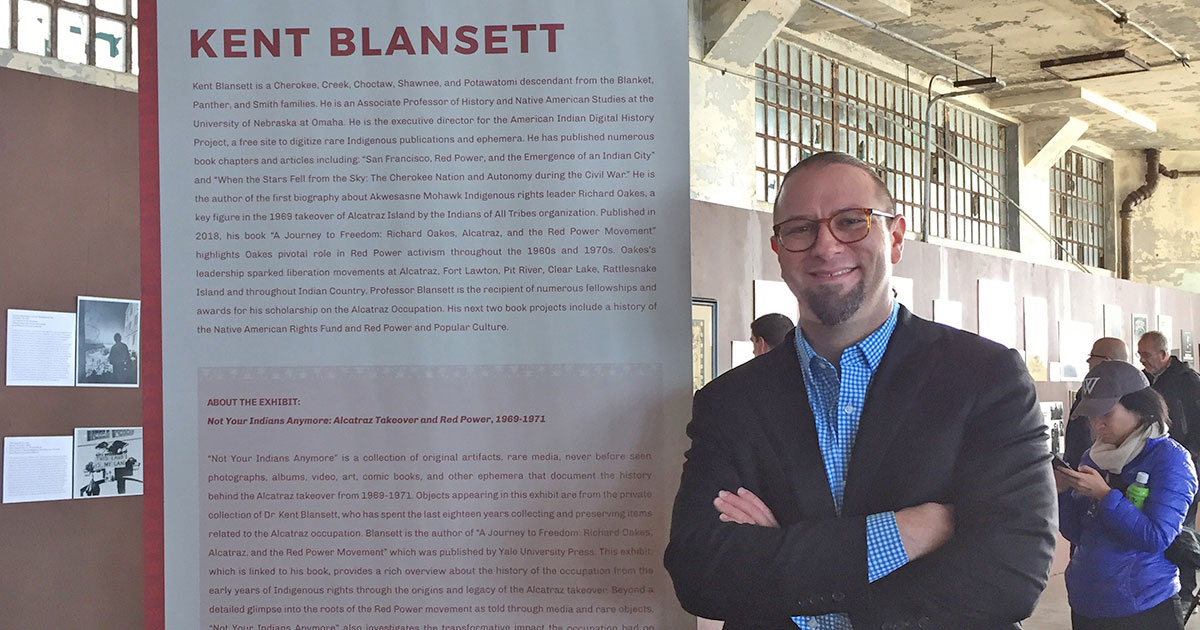 LAWRENCE – Kent Blansett has won rave reviews for his 2018 book, “A Journey to Freedom: Richard Oakes, Alcatraz, and the Red Power Movement” (Yale University Press). The paperback comes out Sept. 8. It’s been optioned for a movie. An exhibition based on his research is up right now on the former prison island in San Francisco Bay, marking the 50th anniversary of the monthslong occupation led by Oakes’ organization Indians of All Tribes.

But the University of Kansas’ new Langston Hughes Associate Professor of Indigenous Studies and of History hopes for one further outcome from his book’s publication: justice for Oakes in the form of a new trial for the man who killed him.

“I think my role as a historian and as a storyteller was to leave open the questions, to tell the story in the hopes that more readers seek justice for Richard Oakes’ life, as well as to seek prosecution, because new evidence is always coming out in the case of Oakes’ untimely death,” Blansett said.

Blansett deliberately uses the word “assassination” to describe the shooting death because Oakes was acting in a political capacity at the time, as a Red Power movement leader. After Alcatraz, Oakes continued to lead activist efforts to secure Indigenous land reclamation and greater rights throughout northern California.

And yet, despite Oakes’ death, despite the occupation’s dramatic end after 19 months, Blansett said that the self-determination movement Oakes led was a success.

“Richard’s main line was that Alcatraz is not an island, it's an idea,” Blansett said.

“The Native occupation of Alcatraz ... fueled hundreds of similar occupations throughout Indian Country and became a catalyst for the Red Power Movement,” Blansett writes in the book. He states that the movement convinced then-President Richard Nixon, who had already been planning legislation to advance Native self-determination, to promote and sign 26 laws that effectively ended the decades-old policy known as “termination” – as in the legislative termination of federal recognition of American Indian reservations.

And the effects of the movement continue to reverberate around the globe, Blansett said.

“A Journey to Freedom” traces Richard Oakes’ life from his birth on the Akwesasne Mohawk reservation on the border between New York and Canada, to his stint as a New York City ironworker and finally details his abbreviated yet consequential career as an activist on behalf of Native peoples.

Using aggressive but non-violent techniques, Oakes was the lead organizer of the Alcatraz occupation that lasted from November 1969 to June 1971 and generated worldwide media coverage for Indigenous rights. Celebrities like actors Jane Fonda and Candice Bergen visited and supported the occupiers.

The Indians of All Tribes based their occupation of the abandoned prison island on treaties that stated that abandoned federal property should revert to its original, Native owners.

But when his young daughter was killed in a mysterious fall during the early days of the occupation, Oakes and his remaining family members moved off Alcatraz Island to further Indigenous causes and places.

It was the ongoing conflict between the Pit River Tribe and Pacific Gas & Electric and other Indigenous land-reclamation issues that brought Oakes to Sonoma, California, where he was shot to death in 1972 at age 30.

And while Oakes’ shooter, Michael Oliver Morgan, was acquitted at trial, Blansett holds out hope that justice might still be done.

Blansett traveled to Alcatraz in November for the opening of a new exhibition he curated there, based on his research and the trove of materials related to the occupation he has collected over the years. In the spring of this year, the National Park Service indefinitely closed Alcatraz Island to visitors because of the COVID-19 pandemic. The exhibition is scheduled to continue online (and could potentially reopen in person) throughout the 50th-anniversary period, through June 2021.

Blansett is pleased with the renewed attention Oakes’ story is getting.

As he puts it in the book, “The life of Oakes highlights the historical connection between Red Power and Native Nationalism, a connection that forever altered the modern Indigenous experience. ... Oakes’ life story provides a window through which the historian can explore the peoples, organizations, institutions, nations, places and spaces that define Intertribalism.”

Blansett writes that intertribalism – organizing various Native peoples under one umbrella to press their cause – is one of Oakes’ greatest legacies.

Photo: Professor Kent Blansett at the Nov. 20, 2019, ceremony on Alcatraz Island marking the 50th anniversary of the occupation and the opening of the exhibit he curated based on his research. Credit: Courtesy Kent Blansett