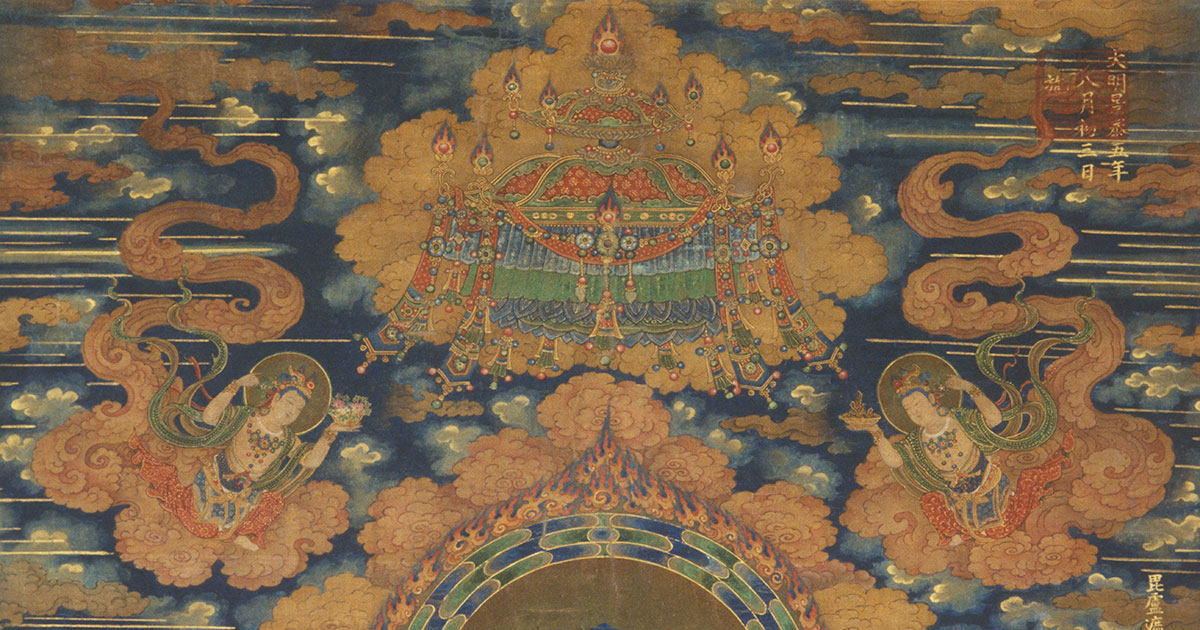 LAWRENCE – The good news is that Sherry Fowler, University of Kansas professor of the history of art, has included twice as many works in a new online exhibition, “Interweaving Cultures Along the Silk Road(s),” as she would have been able to display at the Spencer Museum of Art last March.

And over 200 people from across the globe took part each day of the Zoom version of the accompanying academic symposium, “Visual and Material Culture of the Silk Road(s),” earlier this month — far more than planners were expecting in person as they watched the COVID-19 pandemic close down the campus right before their originally scheduled date. The symposium was co-hosted by KU’s Center for East Asian Studies and the Kress Foundation Department of Art History.

Together the online events constitute a broad-ranging scholarly look at visual and material culture made in the spirit of the global exchanges that took place along what are described in the exhibition’s introduction as the “trade routes that flourished between Europe and Asia from the 2nd century BCE to the mid-15th century.” The exhibition will remain online through year’s end.

“Interweaving Cultures” features 41 high-resolution images of textiles, sculptures, paintings and other works from the Spencer’s extensive collection of Silk Road-related artifacts, curated by Fowler. Fowler called it the culmination of a yearslong series of academic collaborations she began with Maki Kaneko, associate professor of the history of art, involving students and museums across the state, including at Kansas State and Washburn universities.

Fowler said the scope of the exhibition was already vast conceptually, including artworks from Africa and the Middle East along with East Asia and going up in time to the present day, so she decided to organize the works into four categories — Textiles, Buddhism, Orientalism and Amalgamations — while recognizing that many overlap.

Fowler said she realized while working over the summer with Kate Meyer, Spencer Museum curator, that not only was there no limit on the size or number of works they could present online, there were none of the normal risks of displaying fragile or light-sensitive works.

“One of the things about the show is its emphasis on textiles," Fowler said. "Silk is the iconic good that travels along the Silk Road and that it takes its name from. We wanted to have a good selection of textiles, but they're really fragile, and I'm always very aware of the care that goes into preventing too much light exposure and damage when bringing them out. So in this way, the online format was very freeing.”

Textiles and Buddhism are straightforward enough as topics. The section on “Orientalism” takes on the notion, addressed by Edward Said in a 1978 book by that name. Fowler summarized it as Asia and the Middle East interpreted by “the Western gaze.” A “wonderful” 19th-century Dutch bowl decorated with an imaginary scene of China fits into this exhibition category, Fowler said.

“Amalgamations” is, in turn, a response to that, Fowler said, consisting mainly of Asian artists’ depictions of other Asian people, places and things. A 1931 woodblock print of the Taj Mahal by a Japanese artist is included in this section.

As the summer wore on and it became clear KU and the Spencer would not open as normal in the fall, Fowler made plans to move the symposium and exhibition online. She had a lot of help, crediting the “heroic efforts” of Amanda Snider, CEAS assistant director, for transitioning the symposium to a Zoom webinar and managing its technology.

“I structured the symposium to have four panels of different themes with chairs who were responsible for three speakers each,” Fowler said. “When the chairs asked their group members, ‘Would you be willing to do this on Zoom?,’ everybody said yes.”

Though there were some technical glitches during the presentations, Fowler said, she thought the seminar came off well and turned into a global event.

Meyer and Ryan Waggoner, museum director of creative services, as well as several others were instrumental in making the transition, she said.

“We had the event all set up so nicely in the Spencer building,” Fowler said. "We were going to have lunch in the reception room, and then the attendees could all go in to the gallery and look at the art, and they would have interacted with the students and it would have been a nice social time, which is completely missing in an online format.”

Even so, she said, “Interweaving Cultures” provides “an exciting opportunity for a new audience to see the richness of the Spencer collection far beyond its walls.”