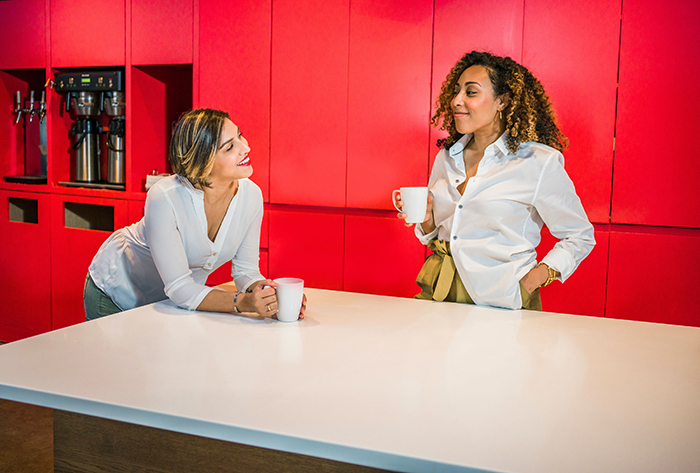 LAWRENCE — Everyone has found themselves at some point in a conversation in which they have to discuss a “taboo” topic or get creative to make themselves understood. Imagine how much more difficult that is when conversing in a second language. A University of Kansas professor has published research on how people get creative when discussing difficult topics in a second language, part of her larger body of work on everyday creativity. 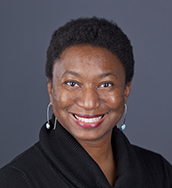 M’Balia Thomas, assistant professor in KU’s School of Education & Human Sciences, has published a journal article and book chapter on creativity in speaking, teaching and assessing in the teaching of English to speakers of other languages. The work illustrates her efforts in the “real world implications of language on everyday life” and how educators can look beyond prescriptive notions of how language is assessed to become advocates for their students.

In a study published in the journal Narrative Inquiry, Thomas examines how non-native speakers navigate difficult topics in order to save face. She analyzes a conversation at a Bible study group in which she took part in a discussion with a group of women who speak English, but not as their first language. One of the participants told the story of an old friend who becomes pregnant while romantically involved with a married man.

“The study looks at how participants help each other out in the telling of a story when disruptions, like taboo topics, arise,” Thomas said. “We humans observe social rules of engagement when talking and working together to understand each other. What we don’t often get to teach is how we engage and negotiate talk in another language.”

There is a widely held theory of communication, especially in language instruction, that talk is cooperative.

“That cooperation is not always straightforward,” Thomas said. “How in some places is it ambiguously cooperative, or even uncooperatively cooperative?”

The author examines three types of cooperation, including tacit cooperation as shown in laughter or “response cries” such as “oh my goodness,” gasps or telling the storyteller she did the right thing, or that they agree with her. Ambiguous cooperation was expressed through language moves that counter negative messages introduced, either by lowering one’s speech, drawing metaphorical comparisons or aggressively moving against absent parties referred to in the study. Others showed disagreement, but cooperatively through the use of hypothetical and imagined phrases in the telling of the story with claims such as “if it were me, I would have…”

Acknowledging such creativity in the oral and impromptu speech of second language, especially when discussing difficult topics, can empower teachers of English as a second language, Thomas said. Too often, teachers focus only on if a learner is using the language in a grammatically correct way, with the proper vocabulary.

“Those are valid questions, but they erase other ways we can evaluate speaking, the creative ways people use language to build friendships, communicate and save face. Where I use this in teaching is when we look at a student, we have to look at them holistically, and look at their strengths in one area of language and think about how we can parlay them into other areas,” Thomas said. “I’m pushing against prescriptive notions of how we assess creativity and language.”

By taking such an approach, teachers can avoid making students feel limited in how they speak a second language and take them out of “test mode,” in which they feel pressure to speak in a certain way and are less inclined to speak freely, she said.

Culturally responsive pedagogy in teaching English as a second language

Thomas has also co-written a book chapter on culturally responsive pedagogy in teaching English language teaching. The chapter, written with Marta Carvajal-Regidor, KU doctoral candidate education, examines how English language teaching around the world has adopted instructional and curricular approaches to teaching English sensitive to the culture, identity, ethnicity and lived experiences of students more than simply using rote methods to teach the language. The chapter appears in the book “Contemporary Foundations for Teaching English as an Additional Language,” edited by Polina Vinogradova and Joan Kang Shin.

The authors examine several approaches to how English is taught in Anglophone and non-Anglophone countries, as well as the social and cultural challenges these contexts face in teaching English across educational levels.

“We want to honor the fact that English language education is not a socially neutral process; while people learn languages for very practical and purposeful reasons, there is conflict, issues of power, domination, equity and access that complicates the teaching and learning of English as an international language,” Thomas said.

The chapter shares the history of culturally responsive pedagogy in teaching English, its roots in multicultural education in the United States and its evolution to shape English language teaching globally.

The authors share examples of higher educational institutions such as one in Spain where English language instruction in subject areas competes with instruction in the local Spanish and Basque languages. Another institution in Tajikistan teaches students English, but they found the students wanted to read texts in English that reflected cultures, populations and values similar to their own, such as “The Kite Runner” or “The Pursuit of Happyness.”

The main goal of the chapter is to share success stories of how schools around the world have adopted pedagogy that is responsive and sustaining of students’ language and cultural backgrounds, as well as the implications of languages in education policy and how teachers can be creative in reaching their students.

“We tend to think of culturally responsive pedagogy as a Black and brown issue in the U.S. However, once this practice leaves U.S. soil, it evolves in the local context, adapting to the local experiences of marginalization and the need for educational empowerment,” Thomas said. “One benefit of documenting the evolution of culturally responsive pedagogy around the world is you can learn more about cultures and languages, the impact of English education on these communities and the everyday creative ways teachers serve as advocates for their students in these spaces.”