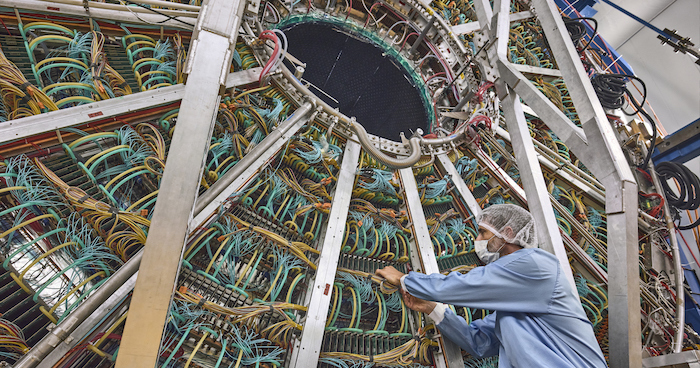 LAWRENCE — Daniel Tapia Takaki, associate professor of physics & astronomy at the University of Kansas, has created a new research team at KU to exploit the unique opportunities to research physics at high energies available at the ALICE experiment at the Large Hadron Collider (LHC).

The largest and most complex particle accelerator in the world, the LHC is located in Geneva and operated by the European Organization for Nuclear Research, or CERN. With the formation of the new research group, KU is developing further its participation with CERN, which until now was solely focused on the CMS project.

ALICE, an acronym standing for “A Large Ion Collider Experiment,” is one of the largest LHC projects, where 1,927 members from 39 countries and 174 institutions participate. At present, the other LHC programs include ATLAS, CMS, FASER, LHCb, MoEDAL and TOTEM projects.

On July 11, the Collaboration Board of ALICE accepted KU as a new full-member institution.

Tapia Takaki is not new to ALICE. He contributed to the design of the experiment, as well as its installation, commissioning and first experimental analyses for a decade before he joined the CMS project to spearhead its forward heavy-ion physics program in 2014.

For his new research program at ALICE, Tapia Takaki recently earned a $447,000, two-year award from the Nuclear Physics program in the Office of Science at the Department of Energy. The award is titled "Research in Heavy-Ion Nuclear Physics: Studying the Initial State of QCD Matter." He has also received funding to serve as a visiting professor at Lawrence Berkeley National Laboratory and University of California-Berkeley during the 2020-2021 academic year.

“ALICE has a unique research program in many ways,” Tapia Takaki said. “It was originally designed to answer the question, ‘What happens when the most dense and hottest matter waves of lead ions interact with each other?’ Tackling this question implies studying the primordial hot and dense matter of quarks and gluons, known as the quark gluon plasma, that is thought to have existed a few microseconds after the Big Bang.”

Since December 2018, all LHC experiments have been on hold for maintenance. When the heavy-ion collisions resume again by 2022, ALICE will start a new phase with a major upgrade of its detector, data-taking and date-processing systems. There will be new pixel sensors with an improved resolution, a new muon forward tracker system and a new fast interaction trigger.

In contrast to most physicists at the LHC, Tapia Takaki is studying reactions that occur when there are no collisions, just near misses, yet the strong electromagnetic fields of the accelerated lead ions produce particles. Such reactions often require a different data-taking strategy and can be used to search for new particles or physics processes that are beyond the current theoretical framework, including Higgs and dark matter candidates.

“We’ve been preparing experiments to observe fine features of the ‘glue’ that binds quarks and gluons together, to understand fundamental questions such as why quark and gluons are never found as free matter waves – a phenomenon called confinement,” Tapia Takaki said.

His research also will probe very strong fluctuations in the distribution of gluons inside the proton. The current knowledge of such fluctuations is very limited — a serious impediment to scientific progress in large numbers of physics analyses.

Using this technique, the KU team is analyzing data to probe quantum entanglement and other quantum mechanical effects in a model-independent way for the first time in colliders. The KU research could call into question assumptions that underpin quantum mechanics and uncover quantum features in the LHC data that have been overlooked.