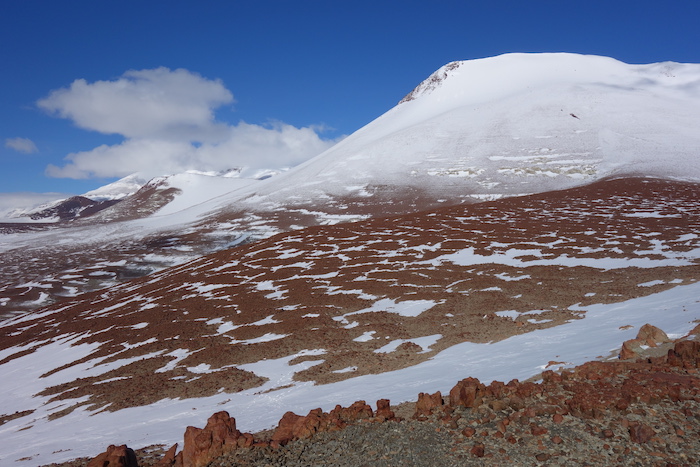 LAWRENCE — Antarctica, mostly covered in snow and ice, isn’t the first place most people might think to search for vital evidence about the evolution of plants. But Antarctica wasn’t always devoid of greenery. During the late Cretaceous, between 66 to 100 million years ago, parts of Antarctica looked more like a temperate rainforest.

For a paleobotanist like Brian Atkinson, assistant professor of ecology & evolutionary biology at the University of Kansas and curator at KU’s Biodiversity Institute and Natural History Museum, Antarctica today is a treasure house of plant fossils offering one-of-a-kind insight into how modern plants evolved and relate to each other on an evolutionary tree. 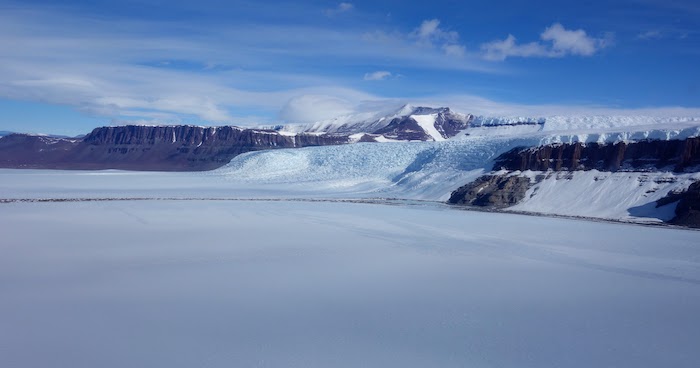 Recently, Atkinson earned a three-year, $850,000 grant from the National Science Foundation to lead a team from KU and the University of Michigan to collect and analyze fossilized flowering plants from promising field sites like the James Ross Basin and Vega Islands at the northern tip of the Antarctic Peninsula. Atkinson’s co-principal investigator is Selena Smith of the University of Michigan.

“My research group and I are interested in understanding the role of Antarctica in the early evolution of flowering plants,” Atkinson said. “The idea that Antarctica was an important area for the diversification or evolution of flowering plants in the Southern Hemisphere dates all the way back to the work of Charles Darwin, the 19th century naturalist.”

Because at one time Antarctica was at the heart of Gondwana, the southern supercontinent comprising Antarctica, South America, Australia, Africa, India and New Zealand, plant fossils from Antarctica can show how plants from these now-separated locales might be related.

“Antarctica seemed to be at the center of it all,” Atkinson said. “My group is interested in going down to Antarctica and collecting exceptionally preserved flowering plant fruits, flowers and seeds — which we know from preliminary data are there — then describing those fossils and putting them into an evolutionary-in-biogeographic context. We’re also interested in understanding links between Antarctica and South America, as well as North America, because there’s some evidence from vertebrates that there was a biotic exchange between those three continents between 66 to 100 million years ago. My colleague Ari Iglesias at the Universidad Nacional del Comahue in Argentina has collected preliminary data.”

Atkinson said filling in gaps in the fossil record of flowering plants — which include everything from grasses to roses, cactuses and magnolia trees — would help scientists better understand a linchpin of our ecology, economy and society.

Atkinson’s work in Antarctica also could help paleobotanists better predict how the lion’s share of plant life on Earth will react to runaway climate change now underway all over the planet.

“Of course, the world is warming catastrophically, and these fossils can provide a paleontological forecast system, if that’s not too much of an oxymoron,” he said.

In Antarctica, Atkinson and his team will travel by ship to two islands in the James Ross Basin. There, they’ll set up camp and hunt for Cretaceous plant fossils, which sometimes appear as impressions of leaves and stems in exposed rock.

“Rocks are jutting over the glaciers, ice and snow pack,” he said. “We look for little dark potentially shiny reflective chunks in the rock. Sometimes it takes a few passes — but once you’ve found one plant fossil you find that same layer is more is likely to contain other fossil plants. The preservation is really good there for Southern Hemisphere plants, and overall western Antarctica has the age of fossils and types of fossils that are hard to find in many other places in the Southern Hemisphere.”

Once fossil specimens are collected, the team will bring them back to the U.S., and Atkinson will perform phylogenetic, comparative and biogeographic analyses to determine relationships between fossil species. Much of the analysis is possible because specimens from Antarctica are so well-preserved (down to the cellular level).

“This type of preservation is called permineralization,” Atkinson said. “I specialize in these type of fossil plants because they’re super well-preserved and you can find them throughout the geological record. It’s just that very few people have the expertise to study them. We know that including these fossils into evolutionary analyses can make really important impacts as far as inferring evolutionary patterns and relationships.”

Additionally, postdoctoral researchers, graduate students and undergraduates at both KU and Michigan will gain research training as part of the new award.

“The biggest training component will be for the graduate students,” Atkinson said. “My co-PI and I will recruit Ph.D.s, and it should be a synergistic endeavor in which these students will go down to Antarctica and learn a lot about Antarctic research and how to do fieldwork there. After the fossils are collected and returned to the U.S., they’ll learn how to curate, prepare and manage specimens. A lot of hands-on preparation techniques will be done here at KU, and fossils that are identified as suitable for CT scanning will be sent to Michigan, and the Ph.D.s will learn about CT scans and so forth.  We’re hoping the students can learn from one another by visiting each lab and then get really well-rounded traditional preparation techniques and more modern imaging techniques — that combination of skills is relatively uncommon. They’ll hopefully come out of this training as very well-rounded in specimen-based research.”

The researchers expect to begin fieldwork in early 2022.