LAWRENCE — Four students at the University of Kansas are nominees for Udall Undergraduate Scholarships, which recognize students who demonstrate leadership, public service and commitment in the fields of tribal public policy, native health care or the environment.

The Udall Undergraduate Scholarship is a federal scholarship that honors the legacies of Morris Udall and Stewart Udall, two former Arizona lawmakers whose careers had an effect on American Indian self-governance, health care and the stewardship of public lands and natural resources.

The Udall Foundation administers the program. This year, the foundation will award 60 students with scholarships of up to $7,000 each, access to the Udall Alumni Network and a four-day scholar orientation in Tucson, Arizona. Students must be nominated by their university to apply, and universities are limited in the total number of nominations they can make. 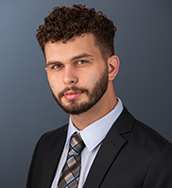 Melek Ben-Ayed, from Wichita and from Sfax, Tunisia, is a graduate of the American School of Doha and the son of Omar Ben-Ayed and Sondes Dhouib Ben-Ayed. A mechanical engineering major, Ben-Ayed serves as the chair of the Student Environmental Advisory Board, president of the American Society of Mechanical Engineers at KU and as an engineering senator and member of the KU Student Senate Executive Committee. For the past two years, he has worked as a resident assistant and desk assistant for KU Student Housing. Since 2019, Ben-Ayed has been involved with the Lawrence Sunrise Movement hub. He currently serves as vice president of the KU Sunrise Movement student organization and as a trainer for the national organization. Ben-Ayed has been involved in undergraduate research with Candan Tamerler, Wesley G. Cramer Professor of Engineering, and Christopher Depcik, professor of engineering. He is a member of Zeta Chapter of Theta Tau engineering fraternity and the Muslim Student Association. 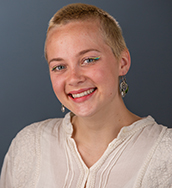 Anna Krause, from San Jose, California, is a graduate of Archbishop Mitty High School and the daughter of Barbara and Roland Krause. A double major in ecology, evolution & organismal biology, Krause is a member of the University Honors Program, where she also served as a communications intern. Krause was selected as a sophomore for the University Scholars Program and has received an Undergraduate Research Award and awards for study abroad and from the Department of French, Francophone & Italian Studies. She is the current president of KU Environs, the research officer for KU SEEDS and a member of the KU Writing Club. She has worked as a paleobotany research assistant for Richard Glor, associate professor of ecology & evolutionary biology, as an entomology student assistant for the KU Biodiversity Institute and as a teaching assistant for undergraduate biology. 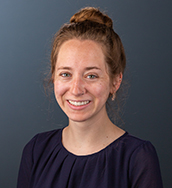 Lydia Juengling, from Washington, Missouri, is a graduate of Washington High School and the daughter of Stephanie Juengling and Michael and Dixie Juengling. An architecture major, Juengling is a member of the University Honors Program pursuing certificates in sustainability, global awareness and service learning. She is a member of TRIO SES & STEM and a Gilman Scholar. She is class representative to the American Institute of Architecture Students and chapter vice president, a member of the United States Green Building Council and serves as a student representative to the architecture department. She has volunteered with Freedom by Design, worked as a tutor for Kansas Athletics and is involved in KU Christian Challenge and Rock Hill Church’s children’s ministry. 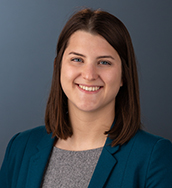 Kaci Zarek, from Norfolk, Nebraska, is a graduate of Norfolk High School and the daughter of Sarah Zarek. An environmental studies major and Spanish minor, Zarek is a member of the University Honors Program, where she has served as an honors seminar assistant. Zarek was selected by the Center for Undergraduate Research for the Emerging Scholars Program as a freshman, which got her started in research with environmental studies and ecology & evolutionary biology associate professor Amy Burgin’s lab at the Kansas Biological Survey, researching how land use changes affect dissolved organic matter in eastern Kansas streams. Zarek has continued her research with Burgin and has received the KU Field Station Award for her research and the Ruben Zadigan Undergraduate Scholarship from the Environmental Studies Program. Zarek is the public relations coordinator for the Environmental Studies Student Ambassadors and has engaged in service programs through that program. She also works as a resident assistant for KU Student Housing.