LAWRENCE — Teams from 35 universities across the country converged on the soggy fields of Rim Rock Farm last weekend to participate in a grueling military skills challenge known as the Ranger Buddy Competition, hosted by the University of Kansas Jayhawk Battalion. 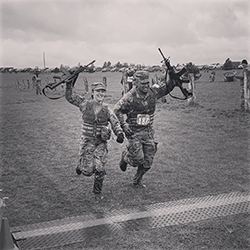 The competition is held annually but was canceled in 2020 due to the COVID-19 pandemic. In 2021, with pandemic mitigation measures in place, KU hosted the competition once more for 254 Army ROTC cadets. Each school could field men’s, women’s and co-ed teams, each team consisting of two cadets.

The competition began with a 15-kilometer (9.3 mile) march for cadets while carrying a 35-pound ruck sack. Teams then navigated more than a dozen “stations” over a two-mile skills course. They disassembled and reassembled various military weapons, performed first aid, read military topographical maps, communicated on tactical radio equipment, including a call for MEDEVAC, and employed claymores and hand grenades. To finish, they ran a 5-kilometer (3.1 mile) race in their tactical uniforms, then scaled a 9-foot-high wall to cross the finish line.

The winning teams in each division came across the finish line between four and five hours after starting.

“These cadets are tough, and this is a tough course. I don’t think anyone will complain about it being too easy in the after action review,” said Lt. Col. John Finch, the commander of the Jayhawk Battalion.

Though teams from as far as Rhode Island and Virginia competed in the event, the winners in each of the divisions came from closer to home. KU won the co-ed division, the University of Minnesota-Twin Cities won the women’s division, and the University of Central Missouri won the men’s division. The overall winner – determined by the top-placed team in each division – was Kansas, who fielded strong teams in each category.

The overall winner of the competition receives a trophy, a much coveted streamer for their battalion guidon and a guaranteed slot for a cadet in their program to attend Air Assault school in Fort Campbell, Tennessee.

“The conditions this year made the event especially taxing,” said Cadet Rachel Witt, a member of the winning KU co-ed team and a three-time winner of the event (2018, 2019 and 2021).

Witt, who has a full ROTC scholarship and majors in exercise science, will graduate in May and commission as a 2LT in the Kansas Army National Guard as a field artillery officer. Her teammate, Cadet Arik Parker, is majoring in general studies in the College of Liberal Arts & Sciences.

The University of Kansas Jayhawk Battalion recruits, develops and commissions quality talent who are dedicated, motivated and resilient in order to provide the nation the next generation of agile and adaptive leaders of character who are prepared to lead teams and win in a complex world.