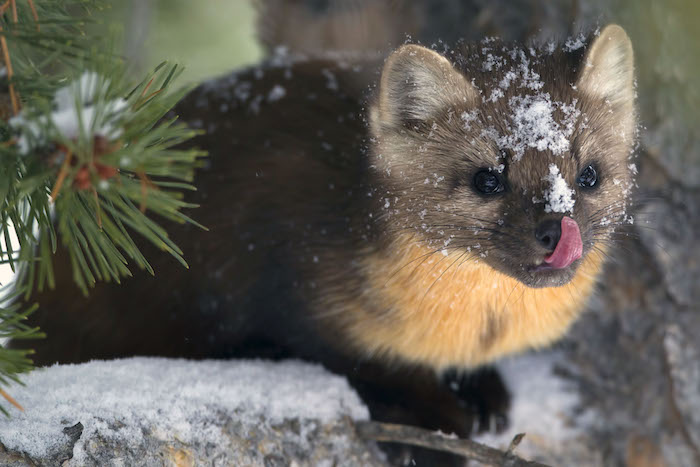 LAWRENCE — How did the first humans migrate to populate North America? It’s one of the great scientific puzzles of our day, especially because forbidding glaciers covered most of Canada, Alaska and Pacific Northwest during the Last Glacial Maximum (LGM). These glaciers limited human movements between northern ice-free areas, like the Beringia Land Bridge, and southern ice-free areas, like the continental United States.

Now, research from the University of Kansas into the whole genomes of the American pine marten and Pacific pine marten — weasel-like mammals that range today from Alaska to the American Southwest — could shed light on how the first humans populated the Americas.

The study used genomic sequence data to determine biogeographic, colonization and demographic histories of martens in North America, and it found that a coastal population of Pacific martens may have inhabited forested refuges along the ice-bound coastline of Alaska and Canada during the LGM. According to the research, published in the Journal of Biogeography, these same forested sanctuaries could have provided food, shelter and other resources to bands of human migrants who populated North America.

“The ‘Coastal Refugium Hypothesis’ is the idea that there were pockets of ice-free land along the coast of northwestern North America, and also communities of organisms that lived in these areas,” said lead author Jocelyn Colella, Robert W. and Geraldine Wilson Assistant Professor of ecology & evolutionary biology at KU and assistant curator of mammals with the KU Biodiversity Institute and Natural History Museum. “Carnivores, like martens, take a lot of resources to sustain. They need something to eat — and martens in particular are considered ‘forest-associated,’ meaning they also need complex forests in order to complete their life cycles. Evidence of martens in this area suggests there may have also been forests, not just tundra and ice, which is different than what we previously thought.”

These forested pockets along the coastline where the coastal Pacific marten dwelled also could have served as sanctuaries for humans where they may have hunted, foraged and found access to shelter and supplies along their icy journey.

“Presumably, migrating humans along the coast would have been seafaring — probably using some type of boat,” Colella said. “But humans have to eat, too, and so the next question is, were we good enough fishermen to live solely off of the sea, or were there other resources? It looks like there may have been substantially more resources in these areas: plants, small mammals, maybe we even ate martens. Who knows?”

Colella and her colleagues first sequenced the marten’s whole genome and then performed analyses with powerful computers to determine when the different species diverged (or split off from a common ancestor and became distinct species) and infer the historical distributions of martens along the complex Northwestern Coast.

“You can compare genomes from different species to see how their evolutionary histories differ, and we do this a lot with phylogenies — a phylogeny is kind of like a family tree, it shows the evolutionary relationships between different organisms,” Colella said. “There appear to be two different lineages of Pacific marten — one coastal lineage found on three islands along the North Pacific coast and then another continental lineage located in areas of the American Southwest, but also in the Pacific Northwest and California mountain ranges. We found a deep history for coastal Pacific martens along the North Pacific Coast — our dates show about 100,000 years, which means they’ve been there since the Last Glacial Maximum when ice covered most of North America. At that time, these martens may have been isolated off the coast in ice-free areas — or ‘glacial refugia’ —  available to terrestrial animals, meaning there was also terrestrial area available for humans migrating along the coast.”

While marten genomes show them inhabiting these coastal refuges during the LGM, so far the fossil record hasn’t confirmed this idea, according to Colella. However, the KU researcher believes some fossils may need to be reexamined.

“Scientists haven’t found a lot of marten fossils from this time period along the coast,” she said. “But, a lot of the fossils they have found are incomplete, sometimes just teeth, and it’s hard to identify species by just their teeth. Interestingly, coastal Pacific martens are found only on islands where their semi-aquatic relative, mink, are not found — it’s possible that coastal Pacific martens have filled that niche instead. In fact, my previous work on marten morphology found that coastal martens are larger than martens on the mainland, so it’s possible that some fossils may have been identified as mink but are actually be martens.”

Although the coastal Pacific marten isn’t today classified as a distinct species, Colella believes the research indicates it should be.

“This is the first time we’ve detected the coastal Pacific marten, and it’s really different from mainland Pacific marten,” she said. “The problem is we don’t yet have enough samples to say it’s a distinct species. The next step is to compare the morphology of the two groups and increase our genetic sample sizes, so we can test the species status of the insular Pacific marten. Pacific martens have this really weird geographic range — with the coastal group found on just a couple islands off the coast of Southeast Alaska and the mainland group found in Pacific Northwest and California forests, but also on mountaintops in New Mexico and Utah. Alaskan islands are very different from the Pacific Northwest, which is very different from the Southwest. Based on their distribution today, it seems that the Pacific martens were historically more widespread. It’s kind of amazing, as we start to look at the genetics of some of these animals, just how little we know.”