LAWRENCE – The Dole Institute of Politics at the University of Kansas has announced that the guest for the 2021 Dole Lecture will be Jean-Arthur Régibeau, the ambassador of Belgium to the United States. This year’s lecture will take place at 7 p.m. May 5 on the institute’s YouTube channel. 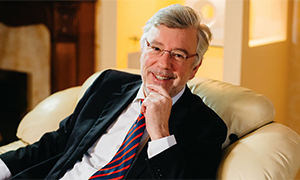 “Ambassador Régibeau is only the second seated ambassador to be a guest at the institute,” Dole Institute Director Bill Lacy said. “As the world begins to emerge from the COVID pandemic, he will bring a unique perspective on what lies ahead for U.S. and European relations.”

Régibeau presented his credentials to the U.S. in Washington, D.C., on Sept. 17, 2020, and took up his duties as ambassador. He entered the office as major transitions dominated the global political and economic landscape, including the presidential administration change in the U.S. and the worldwide vaccination effort to end the pandemic. He will discuss these massive changes, focusing on Belgium, the European Union and what role the U.S. will play.

Régibeau joined the Belgian Ministry of Foreign Affairs in 1998. He was the diplomatic adviser to the Minister of Defense from 1999 to 2002, and he went on to be first secretary at the Belgian Embassy in Berlin. From 2003 to 2007, Régibeau returned to Brussels as head of the Private Office of the Minister of Defense. In 2007, he was appointed director general in charge of Multilateral Organizations at the Foreign Ministry. In this capacity, he managed some aspects of the Belgian presidency of the EU in 2010. From 2012 to 2016, he also was deputy commissioner for the commemoration of World War I. In 2016, he became ambassador to the Russian Federation, Armenia, Belarus and Uzbekistan.