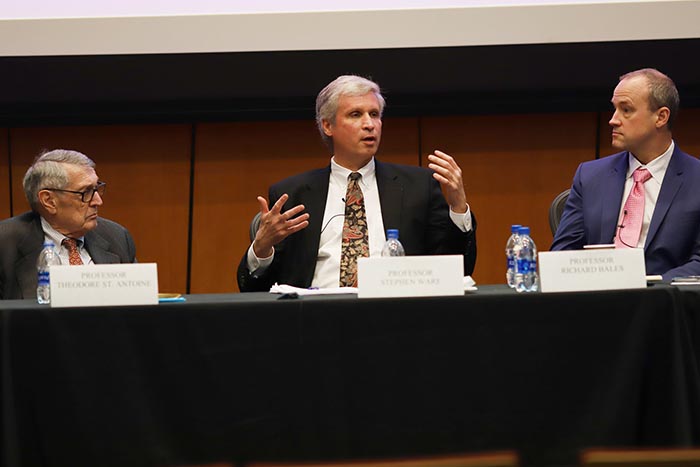 LAWRENCE — President Joe Biden has pledged to support union organizing, and the U.S. House of Representatives recently passed the union-supported Protecting the Right to Organize Act. Yet, high-profile efforts to unionize Amazon warehouse workers have not succeeded, and the PRO Act may not pass the U.S. Senate. These mixed results for labor unions are in today’s headlines, but a University of Kansas law professor notes how such news harkens back to labor conflicts of nearly a century ago.

Stephen Ware, the Frank Edwards Tyler Distinguished Professor of Law at KU, has recently written two articles on labor unions and labor arbitration. He explained that current unionization drives and proposed legislation are responding to a changing economy and workspace, but they are doing so in the context of laws mostly developed shortly after big labor battles of the early 20th century.

“Labor rights in the U.S. largely date back to landmark laws of the 1930s. But then labor activism faded in the second half of the 20th century as progressive reformers turned to other areas, such as the civil rights, consumer, women’s and environmental movements. Labor unions shrank from representing about 30% of private sector workers in the 1950s to under 7% today,” Ware said. “Now, however, with recent years’ renewed focus on inequalities of wealth, progressive energy — sometimes with support from populist conservatives — has returned to labor activism. For instance, efforts to unionize Amazon warehouse workers in Alabama have drawn national support from a variety of people, ranging from President Biden to Killer Mike, a rapper. The growth of companies like Uber and Door Dash has accelerated a shift of work away from stable employment to independent contractors in the gig economy. This shift has prompted some scholars and activists to try to adapt traditional labor law to newer industries.”

This new interest in labor law prompted Ware to reexamine its history “with the hope that learning from the past can helpfully inform today’s discussions,” he said. In an article published in the Arbitration Law Review, Ware examines how 1930s labor law enabled unions to replace at-will employment with arbitration of employee grievances.

The article documents how pre-1930s employers usually defeated unions and maintained the power to fire employees at will. However, 1930s labor laws prohibited anti-union contracts and exempted labor from antitrust laws enough to permit the cartelization of labor, or employees banding together to increase wages. This legally encouraged labor cartelization, Ware said, empowered unions to extract from employers contracts replacing at-will employment with arbitrators deciding what counts as good cause for employers to discharge or discipline employees.

Ware’s comparisons of labor and other arbitration more broadly include his co-written 2020 “Arbitration” casebook. Surveying arbitration in many contexts — labor, commercial, employment, insurance, medical and religious — helps show, Ware said, “just how unique, and how old and traditional, labor arbitration is. So, it will be striking if unions and their allies in government choose to go down much the same path nearly a century later.”