LAWRENCE — By many estimates, the Montessori educational approach is the most prevalent alternative pedagogy model in public schools across the United States. While its history stretches back a century, the Montessori model has historically been underrepresented in the field of educational research. 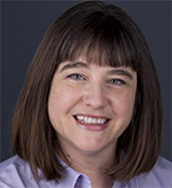 One researcher leading the charge into examining the Montessori education model is Angela Murray, director of the Center for Montessori Research (CMR) within the Achievement and Assessment Institute at the University of Kansas.

Many people may be familiar with the Montessori model, but may not be as familiar with its origins. In 1907, Italian physician and educator Maria Montessori developed the first Casa dei Bambini (“Children’s House”), serving children of low-income families in the San Lorenzo district of Rome.

Despite its current perception as serving progressive, middle-class whites, the Montessori model has a rich history of serving minorities and financially disadvantaged children, especially in Black communities during the Civil Rights era, KU researchers say.

This aspect of Montessori education was explored in the paper “Hidden Black Voices in the History of Montessori Education,” published last year in the American Educational History Journal. Murray co-wrote the paper with Luz Casquejo Johnston, of St. Mary’s College of California; Ayize Sabater, of Association Montessori International/USA and the Black Montessori Education Fund, and Kiara Clark, a University of Kansas graduate in psychology.

Murray’s efforts have been focused on bringing Montessori research into the education research mainstream, and this has developed to include examination of racial justice and equity issues within the current Montessori space.

“In order for Montessori to really grow and continue to be available to a more diverse, less privileged potential group of students, it needs to grow in the public sector,” Murray said.

This starts with an empirical research base. Murray points to the long history of the Montessori model as a sign of its effectiveness but acknowledges that because it's been such an “insulated approach,” it's something that the broader field of education hasn't really embraced.

According to Murray “by creating more of a research base, Montessori becomes then a more viable option to be considered, when we're thinking about bringing educational reform into the picture.”

In 2018, the Center for Montessori Research (CMR) was established, with Murray as its founding director. The center is part of the Achievement and Assessment Institute (AAI) at KU, which offers resources and expertise in psychometrics, curriculum and instruction, test development and more.

In 2019, along with many other interested researchers and scholars, Murray helped create a Montessori Education Special Interest Group within the American Educational Research Association (AERA), the largest organization for education academics. This led to a conference earlier this year, titled “Racial Justice and Equity in Montessori Research” hosted by KU’s CMR and Boston University’s Center on the Ecology of Early Development, with sponsorship from the Brady Education Foundation.

Because of the conference’s positive reception among participants, workshops on its same themes and ideas will be part of the Achievement and Assessment Institute’s 2021 Summer Research Methods Camp. One workshop will focus on the topic of Racial Justice and Equity in Research, led by Jade Caines Lee, a CMR research associate and assistant professor of education at Clark Atlanta University. Another workshop will focus on Conducting Research in Montessori Education, with Angela Murray and Carolyn Daoust — a CMR research associate and Montessori educator — leading the session.

A new paper co-written by Murray, Donna Davis of the University of Missouri-Kansas City and Samantha Ellerbeck, a KU doctoral student in special education, discusses how the implementation of the Montessori model of education interacted with ongoing legal challenges and racial desegregation efforts in the Kansas City, Missouri, school district.

To be published this fall in the American Educational History Journal, “Montessori Education in Kansas City, Missouri from 1988-2005: Race, the Dottoressa and the Pink Tower,” examines the history of public Montessori schools, the turmoil and racial segregation that permeated the Kansas City Missouri School District and the legal rulings that ultimately led to the adoption of the Montessori model in Kansas City public schools.

While the effects of the 1954 Supreme Court case Brown v. Board of Education were far-reaching, adhering to the historic ruling was asymmetric. Many communities — including those within the Kansas City Missouri School District — worked to circumvent the ruling, through racist real estate practices and racial transitional zones that replaced earlier attendance zones.

A legal challenge to these ongoing efforts in Kansas City resulted in a $2 billion remedy through the Supreme Court case Missouri v. Jenkins. This judgment had a dramatic influence on the Kansas City Missouri School District and led to the adoption of the first public Montessori schools in Kansas City.

The Kansas City Missouri School District was an appealing area to examine for Murray because, in her words, “it's in our own backyard.” But the research efforts were also driven by discussions with Frank Vincent, former principal of Faxon Montessori School, the first Montessori in Kansas City, Missouri, and the figure largely responsible for launching the public Montessori program in the district.

“As I got to know Frank, I realized he would probably be willing to tell his story and that story would be an important one,” Murray said. “Not just for Kansas City, but an important piece of educational history.”

Drawing on archival documents, personal reflection, interviews and more, Murray and her co-authors weave together a narrative that, with its specific focus on Kansas City, tells a piece of the larger story of education in America over the last 40 years.

“What's interesting is there are likely similar stories in other cities. I have a colleague in Dallas, who's researching a similar article about how Montessori came to the Dallas public school system,” Murray said.

Just as Maria Montessori pioneered many ideas that are now accepted educational principles — the impact of education in the early years, education for children with disabilities, the importance of physical activity and hands-on learning, and a focus on the whole child — Murray thinks the focus on racial justice and equity is another area where Montessori education can lead. In recent years, organizations such as Montessori for Social Justice and the Black Montessori Fund have formed around these topics.

“There’s such a focus on racial justice and equity in the Montessori community and so much commitment to expanding access to a more diverse population of children to overcome historical patterns of racism in the U.S. educational system, that I think it can be a model for the larger field of education.”