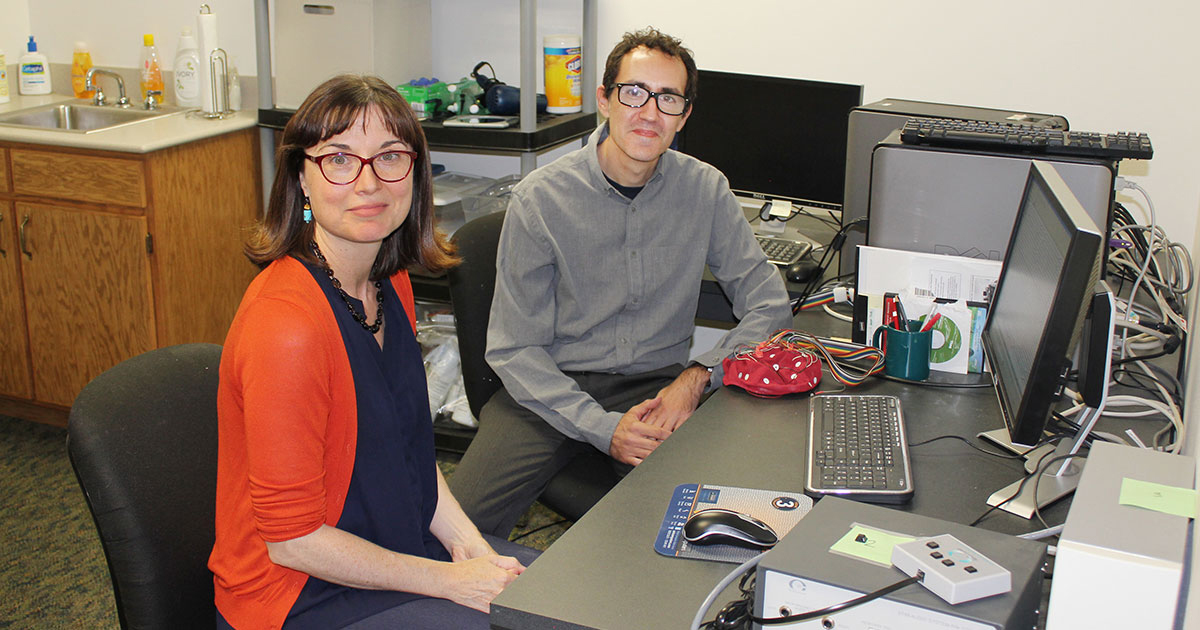 LAWRENCE – In a finding that runs contrary to one of the most-cited studies in the field, a new research paper from University of Kansas linguists shows that even as beginners, adults can quickly begin mentally processing sentence structures in a second language like a native speaker.

And even if their results cannot, just yet, be translated into new teaching methods, the co-authors say this type of scientific study points to optimism for classroom second-language learning.

KU linguistics professors Alison Gabriele and Robert Fiorentino and four co-authors will publish “Examining Variability in the Processing of Agreement in Novice Learners: Evidence From Event-Related Potentials” in the Journal of Experimental Psychology: Learning, Memory, and Cognition. The co-authors are Amy Rossomondo, associate professor in the Department of Spanish & Portuguese, who consulted on the experiment, as well as Lesa Hoffman of the University of Iowa and Lauren Covey and José Alemán Bañón, who were both graduate student research assistants at KU while the project was being conducted, and who are now both professors, Covey at Montclair State University and Alemán Bañón at Stockholm University. The study was funded by a grant from the National Science Foundation.

“We were inspired by a study that is cited in our article as Osterhout, et al., 2006,” Gabriele said. “They were looking to see whether novice learners could show any kind of sensitivity to grammatical rules, even after very little classroom exposure to French. In their study, they started to test these learners after just one month of university French classes, and then they tested them again at four months and seven months.

“Their findings were interesting because they show that, even for linguistic properties that are similar between English and French ... the novice learners’ brain responses were different from what native speakers of French showed."

The results are well-known in the field, Gabriele said, noting it was one of the best-cited studies in the cognitive neuroscience of second-language-acquisition literature.

"We thought it would be interesting to try to do a similar kind of study with a larger sample size, a comprehensive statistical modeling approach, a wider range of linguistic structures and an array of individual difference measures,” she said.

They also chose to work with Spanish students, rather than French language learners.

Over a four-year period, the organizers tested two cohorts totaling nearly 50 students, mainly to compare how their brains worked when processing a linguistic structure that is the same in the two languages — requiring agreement of number between the subject and verb, such as “the girl cries (la chica llora)” vs. “the girls cry (las chicas lloran)” — and when processing something that differs between the two languages, such as number and gender agreement between a noun and an adjective. To illustrate the difference, in English, one can say “the girl is beautiful” or “the girls are beautiful,” and the adjective is unchanged. In Spanish, however, “la chica es hermosa” becomes “las chicas son hermosas,” and the adjective has to be marked for both number and gender. For the sentences testing agreement between a noun and an adjective, they were interested in comparing brain responses to number and gender because number is a feature that is similar between English and Spanish, but gender is unique to Spanish.

“In our study, the second-language learners showed a native-like response for both kinds of number-agreement errors — subject-verb agreement and noun-adjective number agreement,” Gabriele said. “This suggests a strong facilitation for features like number that are part of both the inventory of the first and second language, and we think this means that second-language learners can build on the inventory of features in the native language when learning the second.”

Fiorentino, whose expertise is neurolinguistics, explained how the electroencephalography, or EEG, experiment was conducted. The subjects agreed to wear a cap containing electrodes to detect brainwaves associated with certain language functions while they read sentences in Spanish. Novice learners who had no previous exposure to Spanish were tested three times in their first year of study — at two, six and eight months of classroom exposure. Then a more advanced group of learners was tested twice — after two and six months of classroom instruction.

The goal of the experiment was to see how students’ brains responded when presented with sentences that violated the grammatical rules of their second language, Spanish. The expected EEG response is called P600, a positive-going waveform that occurs about 600 milliseconds after encountering the critical word in the sentence.

“EEG allows us to measure changes on the order of one 1,000th of a second that happen in our brain as we do any kind of cognitive processing, including language processing,” Fiorentino said. “There are different kind of deflections or changes in those EEG waveforms that are linked to different aspects of language processing that we can record by just resting an electrode cap on somebody's scalp noninvasively. So, for example, this P600 waveform is a change that reflects the processing of new linguistic information using grammatical rules. There's a different brain response called N400 that's linked to encountering semantically unexpected words.

“Crucially we know what these different aspects of language processing look like in a native speaker’s brain, and the exciting result is that we found the P600 grammar-related response emerging in novice learners from the very first testing session,” Fiorentino said.

“Probably the most exciting finding for classroom second-language acquisition is that it shows, even with very limited exposure to a second language, that learners can at least begin to show these brain responses related to grammatical processing just like native speakers — at least for properties that are similar between their first and second languages. So I think it's cause for optimism for university foreign-language instruction. It shows that, even with limited exposure in the college classroom, learning can happen quite quickly and efficiently.”