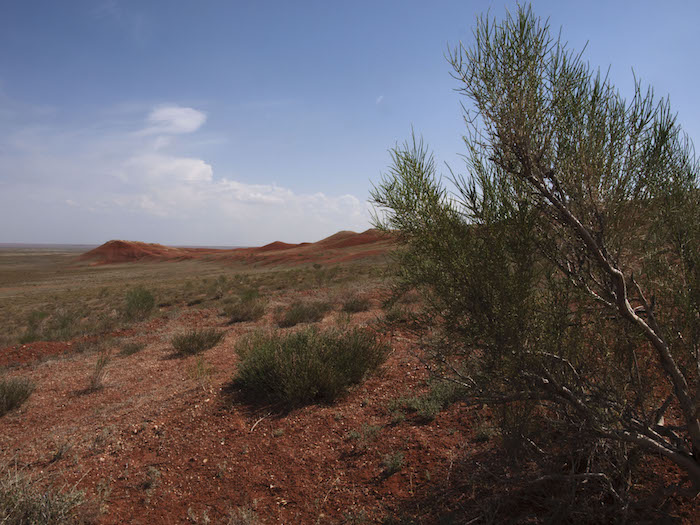 LAWRENCE — A new paper appearing in Biology Letters describes the oldest-known fragmentary bat fossils from Asia, pushing back the evolutionary record for bats on that continent to the dawn of the Eocene and boosting the possibility that the bat family’s “mysterious” origins someday might be traced to Asia. 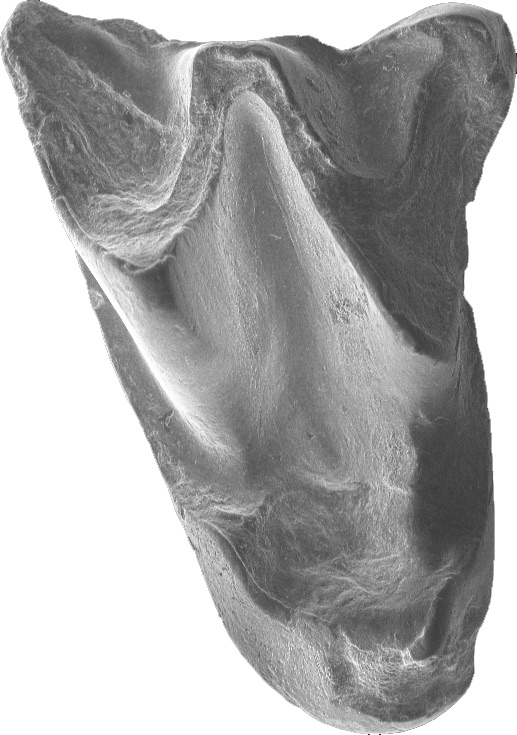 A team based at the University of Kansas and China performed the fieldwork in the Junggar Basin — a very remote sedimentary basin in northwest China — to discover two fossil teeth belonging to two separate specimens of the bat, dubbed Altaynycteris aurora.

“Bats show up in the fossil record out of the blue about 55-ish million years ago — and they’re already scattered on different parts of the globe,” said lead author Matthew Jones, a doctoral student at the KU Biodiversity Institute and Department of Ecology & Evolutionary Biology. “Before this, the earliest bats are known from a couple of places in Europe — Portugal and southern France — and Australia. So, when they show up early in the fossil record as these fragmentary fossils they’re already effectively worldwide. By the time we get their earliest known full skeletons, they look modern — they can fly, and most of them are able to echolocate. But we don’t really know anything about this transitional period from non-bats to bats. We don’t even really know what their closest living relatives are among mammals. It’s a really big evolutionary mystery where bats came from and how they evolved and became so specialized.”

Jones’ co-authors were K. Christopher Beard, senior curator at the KU Biodiversity Institute and Foundation Distinguished Professor of Ecology & Evolutionary Biology at KU; and Qiang Li and Xijun Ni of the Key Laboratory of Vertebrate Evolution and Human Origins, Institute of Vertebrate Paleontology and Paleoanthropology at the Chinese Academy of Sciences and the Center for Excellence in Life and Paleoenvironment at the Chinese Academy of Sciences. 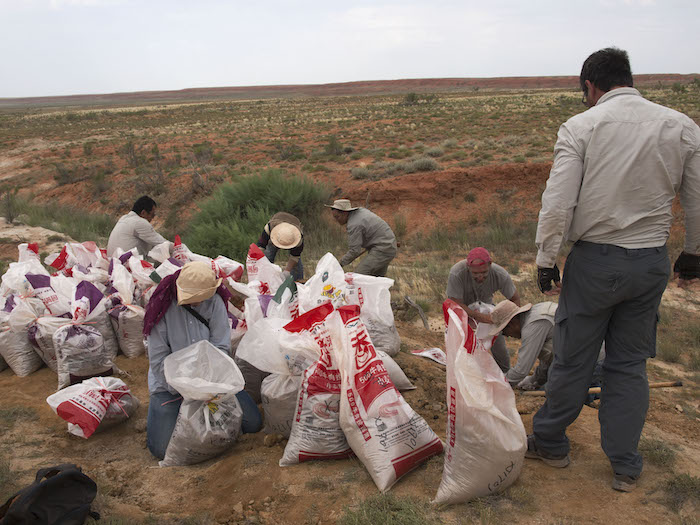 The ancient bat teeth were discovered through painstaking fieldwork in the Junggar Basin, where the KU researchers worked at an isolated field site established by their Chinese colleagues, one of two sites in the region the team hope will continue yielding interesting fossils.

“This was concerted effort over a long period of time by our Chinese colleagues,” Jones said.

“They suspected that there were fossiliferous deposits from the Paleocene and Eocene, and they spent several years going out there, identifying where to find fossils. Chris was a part of several seasons of fieldwork there. I was a part of one season of fieldwork there. What we did was collect a bunch of sediment to screen wash, which is sort of like panning for gold. You pour a bunch of sediment into a sievelike apparatus and let all the dirt and everything fall out, and you’re only left with particles of a certain size, but also fossils.”

Beard said the fieldwork was an outgrowth of long-standing relationships between the KU team and its Chinese counterparts.

“We’ve been fortunate enough to be able to host our Chinese colleagues here in Lawrence for extended research visits, and they’ve more than reciprocated by hosting us for research and fieldwork in China. This work in the Junggar Basin is really trailblazing work because the fossil record in this part of China is only just barely beginning to emerge, and this area is very removed and isolated. It’s just a giant empty place. There are some camels, some snakes and lizards, but you don’t see many people there. That remoteness makes the logistics to do fieldwork there quite difficult and expensive because you’ve got to bring in all your food and water from far outside — all of that hindered research in this area previously.”

Following the challenging fieldwork, the residue left behind from the screen washing at the site was sorted at the Institute of Vertebrate Paleontology and Paleoanthropology in Beijing.

“In 2017, after we got back from the field, Xijun said. ‘Hey, one of the technicians picking through this sediment thinks they found a bat,’” Jones said. “Knowing I was interested in bats, they showed it to me. The next year, the other tooth was found — so there’s two teeth.”

Through meticulous morphological analysis of the teeth, along with biostratigraphy — or analyzing the position of layers of fossil remains in the deposits — the authors were able to date the specimens to the advent of the Eocene, the earliest period when bat fossils have been found anywhere on Earth. Indeed, the presence of these ancient bat fossils in Asia bolsters a theory that bats could have emerged from there in the first place, then distributed themselves worldwide when they later developed flight.

More fieldwork in the area is ongoing, and Jones and Beard said they were hopeful to find even older specimens, perhaps even dating to the Paleocene, the epoch before the Eocene, when researchers believe bats probably originated. Yet the particulars of Altaynycteris aurora remain hazy — for instance, it’s impossible to say from teeth fragments if the animal could fly or echolocate.

“These teeth look intermediate, in between what we would expect a bat ancestor to look like — and in fact, what a lot of early Cenozoic insectivorous mammals to do look like — and what true bat looks like,” Jones said. “So, they have some features that are characteristic of bats that we can point to and say, ‘These are bats.’ But then they have some features that we can call for simplicity’s sake ‘primitive.’”

The researchers said the new fossils help fill in a gap to understanding the evolution of bats, which remains a puzzle to experts — and could teach us more about mammals in general.

“I can think of two mammal groups that are alive today that are really weird,” Beard said. “One of them is bats, because they fly — and that’s just ridiculous. The other one is whales, because they’re completely adapted to life in the ocean, they can swim, obviously, and they do a little bit of sonar echolocation themselves. We know a lot about transitional fossils for whales. There are fossils from places like Pakistan that were quadrupedal mammals that looked vaguely doglike. We have a whole sequence of fossils linking these things that were clearly terrestrial animals walking around on land, through almost every kind of transitional phase you can imagine, to a modern whale. This isn’t true for bats. For bats, literally you’ve got a normal mammal and then you’ve got bats — and anytime you’ve got a fossil record that’s a giant vacuum, we need work that can fill partly that. This paper is at least a step along that path.”

Top photo: The ancient bat teeth were discovered through painstaking fieldwork in the Junggar Basin, where the KU researchers worked at an isolated field site established by their Chinese colleagues. Credit: Matthew Jones