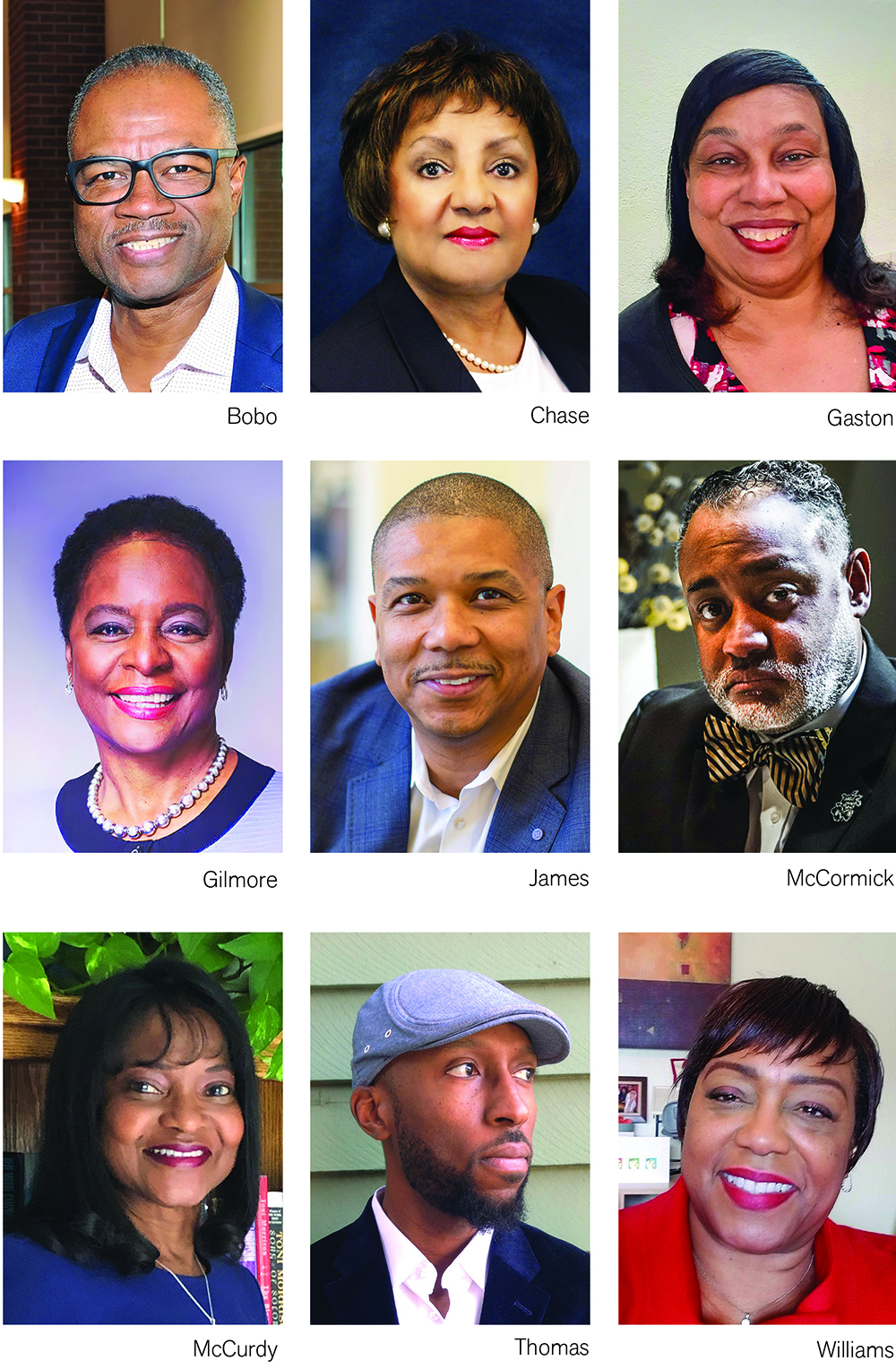 LAWRENCE — Nine alumni will receive the University of Kansas Alumni Association’s Black Alumni Network Mike and Joyce Shinn Leaders and Innovators Award for their contributions to the university, their profession and their communities. The award is named for the late Mike Shinn, a 1966 School of Engineering alumnus, who helped found the Black Alumni Network and the Leaders and Innovators Project, and his wife, Joyce.

The nine recipients will be honored Oct. 14 on the first evening of the network’s biennial reunion, during KU’s Homecoming weekend:

Luke Bobo is a nationally recognized speaker and writer on apologetics and public theology. He serves as vice president of strategic partnerships for Made to Flourish, an organization that provides resources and engagement opportunities to a national network of pastors. He is also a visiting professor at the Institute of Biblical Studies and a visiting instructor at Covenant Theological Seminary.

For his community, he serves on the boards for Carver Baptist Bible College, the Center for Public Justice and HustleUSA. For KU, he has served on the School of Engineering’s Diversity & Women’s Advisory Board and is a trustee for the Department of Religious Studies. He also served on the Alumni Association’s national board of directors, and he led the KU Black Alumni Network as president.

In addition to his KU electrical engineering degree, he earned a master’s degree in engineering, a master’s of divinity and a doctorate in education leadership.

Phyllis Stevens Chase is a professor and the PK-12 EdD Program coordinator for Baker University. During her career she has served in numerous leadership roles, including superintendent for the public school districts in Topeka and the cities of Kansas City, Springfield, Columbia and North Kansas City, Missouri.

She also has volunteered as a board member for many organizations, including Mercantile Bank, the United Way of the Ozarks and the Topeka Symphony.

Patricia Weems Gaston returned to KU in 2018 to become the Lacy C. Haynes Professor of Journalism after her career as an award-winning journalist. She served in many editorial roles for The Washington Post, where she helped produce the national, foreign, features, editorial and opinion sections. Before the Post, she was assistant international editor for the Dallas Morning News and part of a Pulitzer Prize-winning team that reported on violence against women.

Gaston advises the staff of the University Daily Kansan, mentors students through the Rising Scholars Program and serves on the KU Faculty Senate executive committee.

Denise White Gilmore is an advocate and leader on issues of social and racial justice and equitable community development. She is the senior director for the Division of Social Justice & Racial Equity in the Office of Mayor Randall L. Woodfin of Birmingham, Alabama. She leads multidisciplinary efforts to serve marginalized communities and helps preserve, rehabilitate and share areas of cultural significance. Currently, she leads the city’s efforts to continue the development of the Birmingham Civil Rights National Monument, which was created by former President Barack Obama in 2017.

She also serves on the strategic planning committee for the Alabama African American Civil Rights Sites Heritage Consortium and has served on the board for the Kansas City Affiliate of the Susan G. Komen Foundation. Gilmore is also an active and proud member of Delta Sigma Theta sorority.

Darren James is president of KAI Enterprises, a design and construction services firm with eight offices across six states. Prior to KAI, James served as the architect and assistant director for construction at Texas Woman’s University.

In the Dallas-Fort Worth area, he serves as the president of Fair Park First, a nonprofit group that oversees equitable growth and development of a historic neighborhood in South Dallas. He also chairs the Dallas Black Chamber of Commerce, one of the oldest Black chambers in the United States. He has served on the boards of Big Brothers Big Sisters of Dallas and the Dallas Citizen’s Council and the advisory board of the KU School of Architecture & Design. He recently was named to D CEO Magazine’s “500 Most Influential Business Leaders in North Texas.”

Mark McCormick serves as the director of strategic communications for the ACLU of Kansas. He also serves on Kansas Gov. Laura Kelly’s Racial Equity & Justice Commission, on the board for the Association of African American Museums and as a trustee of the William Allen White Foundation at the KU journalism school. He has worked as a reporter for The Wichita Eagle, The Louisville Courier-Journal and the Springfield News-Leader. He is the author of “Barry Sanders: Now You See Him … His Story in His Own Words.” McCormick holds five gold medals from the Kansas City Press Club and was recognized as the club’s “Best Columnist” in 2009. He also served as the executive director of the Kansas African American History Museum.

Clantha Carrigan McCurdy is the senior deputy commissioner for access and student financial assistance with the Massachusetts Department of Higher Education, where she manages the legislative budget for scholarships, grants, tuition waivers and student loans for current and prospective students.

She also serves as president of the National Association of State Student Grant and Aid Programs and on the Diversity, Equity and Inclusion Advisory Committee of the KU School of Education & Human Sciences. Her honors include the Massachusetts Performance Recognition Award and the National Association of Student Financial Aid Administrators Service Award. The Eos Foundation recently named her one of the “50 Most Influential People of Color in Higher Education.”

Aaron Thomas is executive producer and CEO of Wyandotte Entertainment Inc. and an adjunct professor at the University of Southern California’s School of Cinematic Arts. He is also the executive producer of the popular TV show “S.W.A.T.,” airing on CBS. He has written for numerous other shows including “Soul Food: The Series,” “Friday Night Lights” and “CSI: New York.”

He mentors the next generation of writers and is a frequent guest speaker for the CBS Writers’ Program. He also helped create a mentoring program for television writers of color in the Los Angeles area.

Irvetta Williams is the founder and lead consultant for iJay Enterprises, a firm that helps developers and municipalities navigate pre-construction and building code processes. She also is an expert in leveraging tax increment financing and community development block grants to develop residential and commercial projects across the Greater St. Louis area.

She is an adviser to the KU School of Architecture & Design, and she served on the board of the St. Louis Community Builders Network and the Foreclosure Intervention Taskforce of the Urban League of Metro St. Louis.

Since 2006, the Black Alumni Network has honored more than 80 Leaders and Innovators. For information about the network and the 2021 Reunion Weekend Oct. 14-17, visit kualumni.org/ban.

Through the support of members and donors, the KU Alumni Association advocates for the University of Kansas, communicates with Jayhawks in all media, recruits students and volunteers, serves the KU community and unites Jayhawks. For more information, visit kualumni.org.