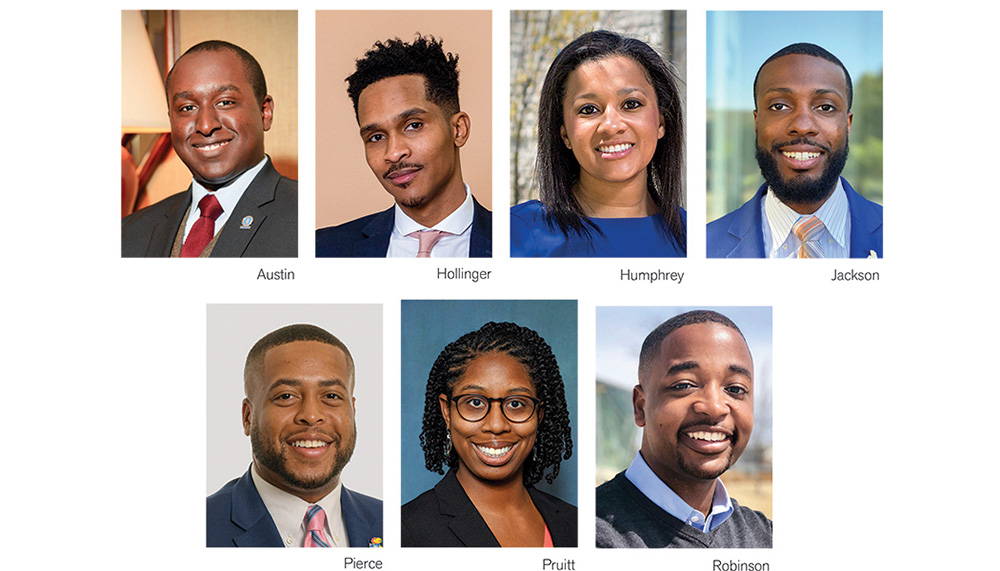 Michael Austin is a public-sector economist and policy researcher and president of Knowledge & Decisions Economic Consulting LLC. He previously directed fiscal policy for the Kansas Policy Institute and as the chief economist for two governors. He volunteers as a high school tutor and debate coach.

Marcus Hollinger is senior vice president for marketing of Reach Records and co-founder of Portrait Coffee Roasters, an award-winning company that seeks to use coffee as a mechanism for doing good across Atlanta.

Nicole Humphrey is an assistant professor of political science at the University of Miami who researches the impact of organizational structures and processes on gender and racial inequities. She also chairs the Student & New Professionals Section of the American Society of Public Administration.

Craig Jackson is senior director of development for the University of California-Davis School of Engineering. He also co-chairs the diversity, equity and inclusion committee for development and alumni relations at UC Davis. For the KU School of Education & Human Sciences, he serves on the dean’s advisory board.

Margaret Pruitt completed a fellowship at the Milken Institute’s School of Public Health and now serves as a resident physician at the George Washington University Hospital in Washington, D.C., and a member of the departmental council for diversity, equity and inclusion at the GW School of Medicine. She also guides high school students as a mentor and tutor.

Joshua Robinson is a senior associate and network manager at Living Cities, an organization focused on building economically and racially inclusive cities. He also is an active member of the Austin Area Urban League and the Sigma Kappa Sigma Chapter of Phi Beta Sigma fraternity.

For more information about the Black Alumni Network and the 2021 Reunion Weekend Oct. 14-17, visit kualumni.org/ban.

Through the support of members and donors, the KU Alumni Association advocates for the University of Kansas, communicates with Jayhawks in all media, recruits students and volunteers, serves the KU community and unites Jayhawks.

As a 501c3 nonprofit organization, the KU Alumni Association and its networks remain strictly nonpartisan and are not affiliated with any political party, nor do they endorse any candidates for elected or appointed offices in local, state or national government. For more information, visit kualumni.org.