LAWRENCE — Wen-Xing Ding, a scientist at the University of Kansas Medical Center who specializes in research into the mechanisms of degradation and recycling of cells in the liver, is the recipient of the 2021 Chancellors Club Research Award. 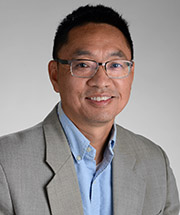 Ding, the William Warner Abercrombie Professor in the Department of Pharmacology, Toxicology & Therapeutics at KU Medical Center, has made valuable scientific contributions in the field of liver injury and cell death mechanisms. His research focuses on autophagy-lysosomal pathway, an important cellular recycling process that takes out the harmful “garbage” generated by the cells. That pathway is impaired in alcohol-related liver disease, which is a major health problem and a leading cause for liver disease-related deaths worldwide.

His research strives to improve outcomes of advanced diseases such as alcoholic hepatitis by boosting that recycling system to repair cellular damage induced by alcohol. His work has potential to have a broad impact on the understanding of various diseases, not just those affecting the liver, and it could be a building block for therapeutic interventions.

“Overall, Dr. Ding’s studies caused a paradigm shift in cell death and organ injury research,” said Hartmut Jaeschke, distinguished professor and chair of the Department of Pharmacology, Toxicology & Therapeutics, in his letter of nomination for Ding.

Since Ding joined the faculty at KU Medical Center in 2009, he has established himself as one of the international leaders in the autophagy field. He has published more than 165 peer-reviewed publications, more than 80 of them during the last five years. Most of his publications are found in high-impact journals: Forty-three of his publications have been cited 100 or more times.

Ding not only excels in research but also is active in teaching in the toxicology graduate program. He enjoys working with students who are passionate about science.

“Many of my trainees have presented their work at national and international meetings and won awards for their impactful work,” Ding said. “It gives me great pleasure to see trainees become more successful than me in their careers.”

When he came to KU Medical Center, Ding said he had his doubts about whether he could find success as an independent researcher. But he received invaluable support in the mentoring environment at the medical center.

“I have learned a lot from these outstanding senior faculty members, many of whom are also recipients of this award,” Ding said. “The recognition with this prestigious award and seeing my name listed among these highly successful colleagues is a great honor to me.”

The Chancellors Club was founded in 1977 and recognizes donors who give $1,000 or more annually to the Greater KU Fund. As an honoree, Ding will receive a $10,000 award and recognition at a future celebration.