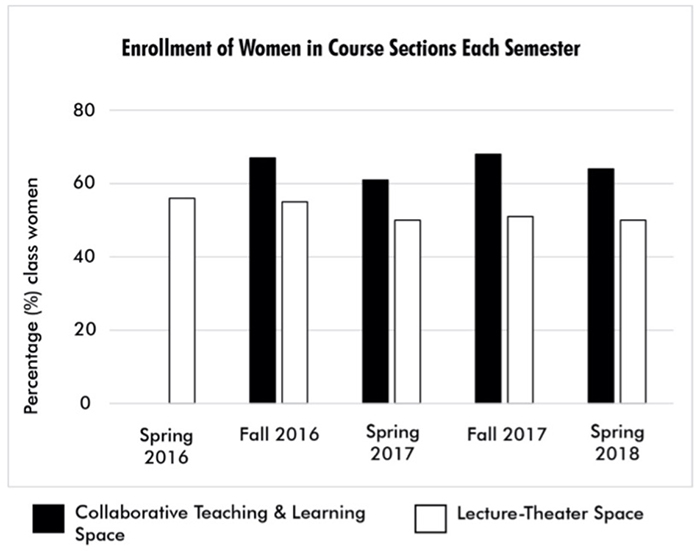 LAWRENCE — The Association of American Universities has made a recent push to encourage institutions to install more active learning spaces on campuses, in which students can move and work together, instead of sitting in fixed seats in a traditional lecture hall. A new study from the University of Kansas found students are self-sorting between the two spaces and that active learning classrooms can be a way to attract more women to STEM fields and keep students enrolled and engaged.

Michael Ralph, KU graduate student in educational psychology and lead researcher with architecture firm Gould Evans, was talking with David Benson, associate professor of chemistry, during a Teaching Scholarship Collaborative meeting hosted by the Center for Teaching Excellence. They were discussing who chooses which types of classrooms and realized they had an ideal setting to study a comparison: Benson was teaching Organic Chemistry II in both an active learning space and in a lecture hall.

“(Benson) was talking about how he noticed a lot of honor students tended to enroll in active learning spaces versus lecture halls,” Ralph said. “And he shared that the active learning section included a higher percentage of women as well. I asked why, and we realized neither of us knew, so we decided to look into it further.”

Ralph, who was also associated with KU’s Center for STEM Learning; Blair Schneider of the Kansas Geological Survey; Benson; Doug Ward, associate director of KU’s Center for Teaching Excellence; and Anthony Vartia, assistant teaching professor of chemistry, conducted a study on who chose which spaces for the class, why and how the classes performed. Their study was published in the journal Learning Environments Research.

The study showed that Benson’s observation held true as nearly 50% of the students who chose the active learning space were honor students, compared to 13% who chose the lecture hall. The collaborative space also had a class composed of more women. The researchers hope to study more about why women choose active learning spaces, and they are conducting more research to better understand the students’ decision-making and how they fare academically over several semesters.

Students also reported a preference for the collaborative spaces that exceeded what the facilities could accommodate. A significant number of students in the lecture hall reported they had hoped to take the class in the active space but were unable to because the section was full.

While the spaces are physically different, the classes were the same, being taught by the same instructor, with identical curriculum and methods. However, in the active spaces, students can move their seats, collaborate, share resources and engage with each other.

“The space does not force one direction where everyone should be looking,” Ralph said when describing an active learning space versus a lecture hall. “There are many centers of learning and communication within the room. In this case, the activity we refer to in an active learning space is cognitive. Students can listen to the instructor and work together.”

The study also found those in the newly designed rooms earned higher grades in the course and had less than half the fail/withdraw rate of those in the lecture hall. That can be partially explained by the higher rates of honor students choosing the spaces but is still significant, Ralph said. The higher percentage of women choosing the space can also be key to ensuring there are welcoming places where they can engage with instructors and peers while they learn, stay enrolled and move on to careers in STEM fields.

“We confirmed there are differences as students self-sort. In this case, we showed peer influence to be important in how and why students made their choices,” Ralph said. “I think that speaks to the role of social capital, as applied to who chooses these spaces. Now we need to continue to learn about how these student choices affect their learning over the duration of their degrees and ensure there is equitable representation and availability for students who want to learn in redesigned spaces.”