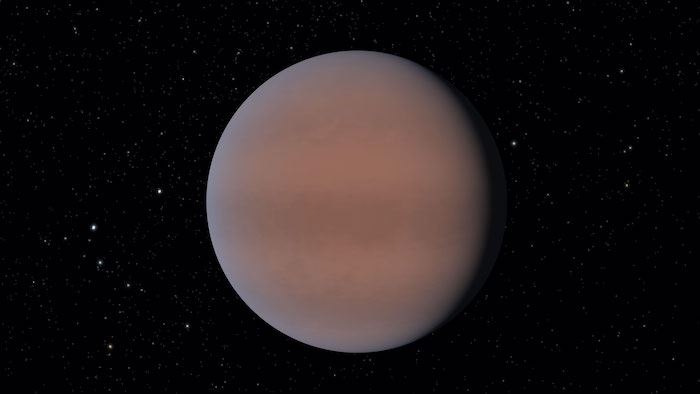 LAWRENCE — On Thursday, two University of Kansas astronomers announced the probable discovery of water vapor on exoplanet TOI-674 b, a “Warm Neptune” some 150 light years from Earth in the constellation Antlia.

“This discovery highlights the powerful synergy between NASA's current space telescopes that allows them to find exciting new planets and to measure their atmospheric properties,” Crossfield said. “Measuring the atmospheric makeup of a gas planet like this helps us learn how the planet may have formed. Some models predict that such planets may form ‘dry’ far from their star, but the water vapor we see shows that those models likely don’t apply to this planet.”

In addition to the HST data, the researchers incorporated new TESS short-cadence optical photometry, as well as Spitzer/IRAC data, and re-fit the transit parameters for the planet.

According to Brande, who led the analysis, solar systems like our own could be rare — and there remains some uncertainty about how our own solar system formed.

“Uranus and Neptune aren’t well-explained by some of the formation models without some drastic migration in and out of the outer solar system,” he said. “In addition, we don’t have good measurements of what’s in their atmospheres. We’ve discovered thousands of exoplanets, and many of the most common ones are likely to be more like Uranus and Neptune than they are Earth, making understanding a diversity of exoplanets critical to understanding our own solar system planets.”

“TOI-674 b is also particularly easy to study, making it a good target for our work,” Brande said.

According to Crossfield, the researchers will aim to add more detail to their understanding of TOI-674 b in the coming years.

“Our detection of water vapor in this planet with the Hubble Space Telescope is just a foretaste of what we'll be able to learn about exoplanet atmospheres with NASA's just launched James Webb Space Telescope,” he said.

Image: Illustration of TOI-674 b, with an atmosphere that, according to a recent study, includes water vapor. Credit: NASA/JPL-Caltech