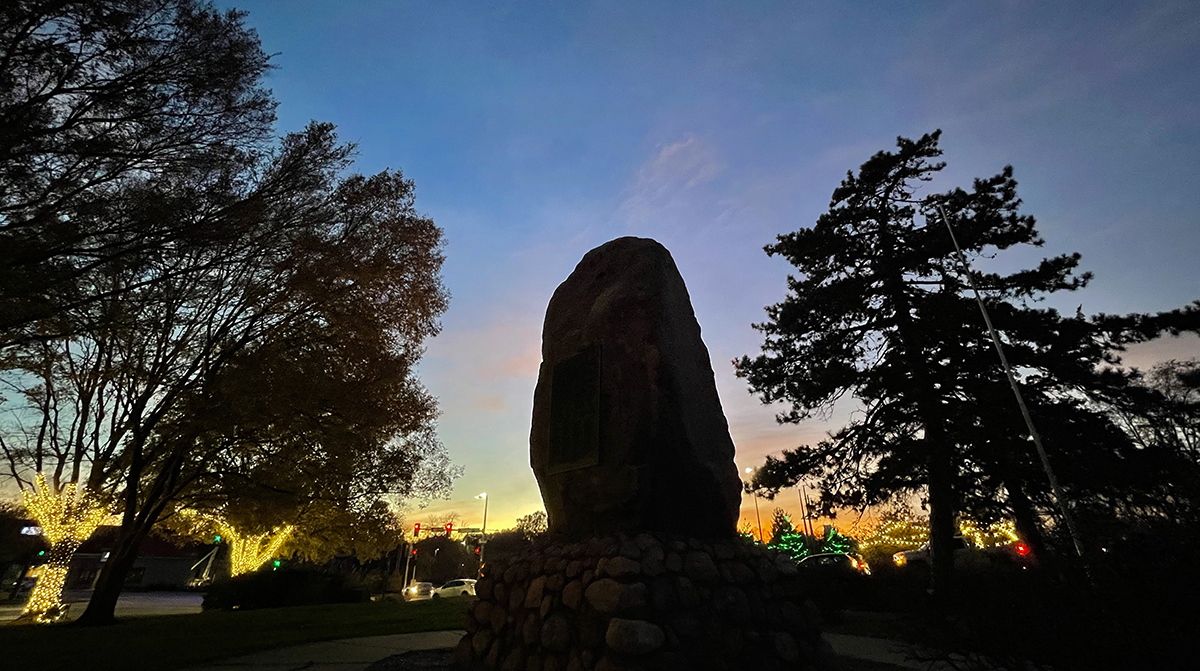 LAWRENCE — The Mellon Foundation has announced a grant to the In ‘zhúje ‘waxóbe/Sacred Red Rock Project for the return of a 28-ton red Siouxan quartzite boulder located for the past 93 years in Robinson Park, Lawrence, to the Kaw Nation.

Led by members of the Kaw Nation in collaboration with the City of Lawrence, University of Kansas, Spencer Museum of Art, Kanza Heritage Society and others, this 2 ½-year project will relocate In ‘zhúje ‘waxóbe to Allegawaho Memorial Heritage Park, near Council Grove. This land, owned by the tribe since 2002, is a portion of the final reservation lands of the Kaw Nation in Kansas before their 1873 relocation to Indian Territory (Oklahoma).

On behalf of the Kaw Nation, Vice-Chairman James Pepper Henry said, “The Kaw Nation is grateful and humbled to receive generous support from the Mellon Foundation for the return of our sacred ancestor In ‘zhúje ‘waxóbe. This grant will also provide resources to implement an interpretive plan and infrastructure for our visitors to learn about the Kaw people, the original inhabitants of Kansas. We look forward to working in cooperation with the City of Lawrence, University of Kansas and other project partners to facilitate this process, and to strengthen our relationship and visibility with the citizens of Kansas.”

A key aspect of the project is acknowledging and redressing the harm done when In ‘zhúje ‘waxóbe was moved from its original location at the confluence of the Shunganunga Creek and Kansas River near Tecumseh to Robinson Park in Lawrence in 1929 to become the base for a monument to the city’s “Pioneers.”

This $5 million grant will support the relocation of In ‘zhúje ‘waxóbe, infrastructure and interpretation at Allegawaho Memorial Heritage Park, and programming in Lawrence (and Council Grove) that engages the community in this multifaceted story and envisions possibilities for the place now known as Robinson Park.

In 2015, Kansas-based artist Dave Loewenstein began working with Pauline Eads Sharp, a member of the Kaw Nation Cultural Committee, to recall the stories of In ‘zhúje ‘waxóbe in an effort to redress its misuse by the City of Lawrence. Their project led to a collaboration with the Mid-America Arts Alliance, Lawrence community members and members of the Kaw Nation.

“The City is excited by this grant from the Mellon Foundation and the opportunity it affords us to continue the process of returning In ‘zhúje ‘waxóbe to the Kaw Nation, as outlined in our resolution on March 16, 2021,” said Lawrence City Mayor Courtney Shipley. “We are pleased to partner with the University of Kansas and Lawrence community members in this process of reconciliation and relationship building with the Kaw Nation.”

Relocating In ‘zhúje ‘waxóbe will require months of planning and preparation. Experts have conducted a ground-penetrating radar examination to ensure that the internal structure of the Rock is sound and should not be harmed by the move if appropriate care is taken. The team anticipates completing the move of In ‘zhúje ‘waxóbe in April or May of 2023. Ceremonies and gatherings will include a visit to In ‘zhúje ‘waxóbe’s original location along the Kansas River, preparations and prayers proceeding and during the move, and ceremonies to welcome the Rock to Allegawaho Park.

Pauline Eads Sharp, on behalf of the Kanza Heritage Society, said, “The Kanza Heritage Society is honored to support the efforts of the Kaw Nation and City of Lawrence for their joint effort to return In ‘zhúje ‘waxóbe to the Kaw people. Our mission is to support the continuum of the cultural lifeways of the Kanza. We appreciate the recognition and support of the Mellon Foundation to assist in this endeavor.”

This project opens an unprecedented opportunity to document the unfolding of a reparative process between Kaw Nation and the City of Lawrence. The team will collect and record events and interviews with participants and community members. They will produce a series of edited stories and publish an edited volume describing the reparative process and telling the story of the Rock’s arrival in Kansas during the greatest extent of North American glaciation some 300,000 years ago. Working with Kaw Nation elders, the team will also document the tribe’s relationship with In ‘zhúje ‘waxóbe and its inclusion in the Kaw prayer cycle.

The leadership team for the project includes Jay T. Johnson, professor of geography and director of the Center for Indigenous Science, Research, and Technology of the Institute for Policy & Social Research at KU; James Pepper Henry, Tribal Council Vice Chair of the Kaw Nation; Pauline Eads Sharp, chair of the Kanza Heritage Society of the Kaw Nation; artist and community organizer Dave Loewenstein; Toni Wheeler, city attorney, City of Lawrence; and Cassandra Messick Braun, curator of global Indigenous art of the Spencer Museum of Art. Johnson and IPSR will lead the fiscal and logistical work of the project. In all aspects of the project, the team will follow the direction of the Kaw Nation.

Image: Silhouette of In ‘zhúje ‘waxóbe and its base at sunset. Credit: Dave Loewenstein.