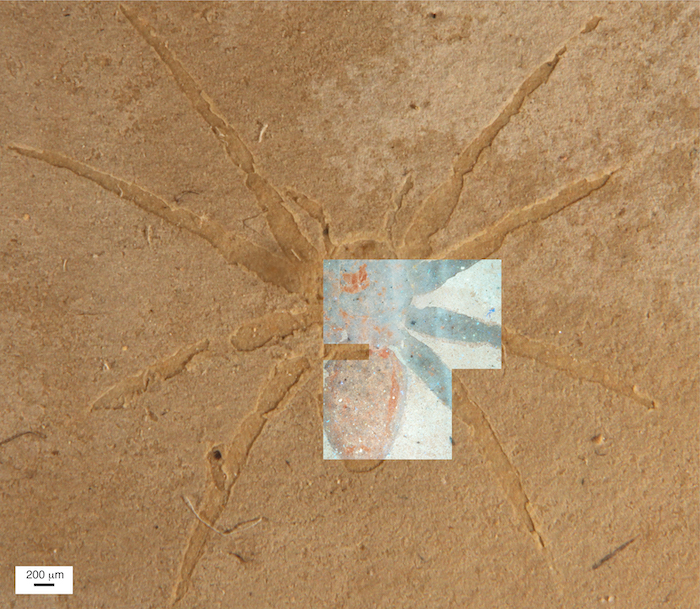 LAWRENCE — A geologic formation near Aix-en-Provence, France, is famed as one of the world’s chief treasure troves of fossil species from the Cenozoic Era. Since the late 1700s, scientists there have been unearthing amazingly well-preserved fossilized plants and animals.

The Aix-en-Provence formation is particularly known for its fossilized terrestrial arthropods from the Oligocene Period (between roughly 23-34 million years ago). Because arthropods — animals with exoskeletons like spiders — are rarely fossilized, their abundance at Aix-en-Provence is remarkable.

A new study in the journal Communications Earth & Environment from researchers at the University of Kansas is the first to ask: What are the unique chemical and geological processes at Aix-en-Provence that preserve spiders from the Oligocene Period so exquisitely?

“Most life doesn’t become a fossil,” said lead author Alison Olcott, associate professor of geology and director of the Center for Undergraduate Research at KU. “It's hard to become a fossil. You have to die under very specific circumstances, and one of the easiest ways to become a fossil is to have hard parts like bones, horns and teeth. So, our record of soft-body life and terrestrial life, like spiders, is spotty — but we have these periods of exceptional preservation when all circumstances were harmonious for preservation to happen.” 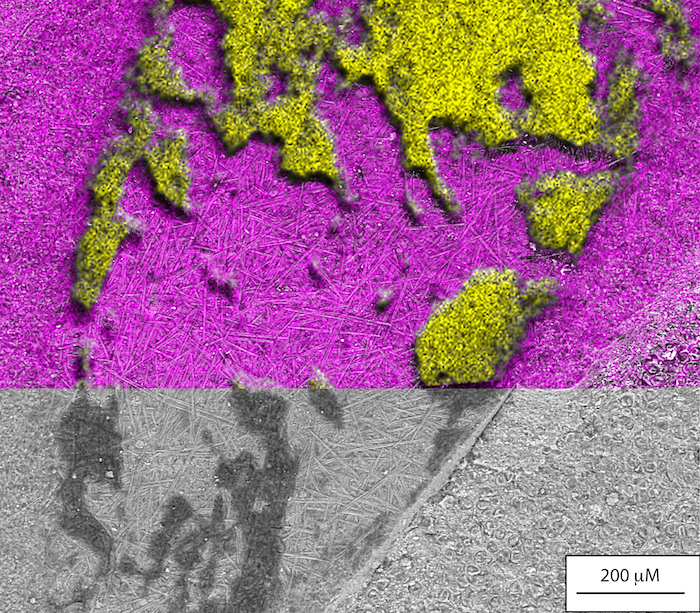 Olcott and her KU co-authors Matthew Downen — then a doctoral candidate in the Department of Geology and now the assistant director at Center for Undergraduate Research — and Paul Selden, KU distinguished professor emeritus, along with James Schiffbauer of the University of Missouri, sought to discover the exact processes at Aix-en-Provence that provided a pathway for preservation for the spider fossils.

“Matt was working on describing these fossils, and we decided — more or less on a whim — to stick them under the fluorescent microscope to see what happened,” Olcott said. “To our surprise they glowed, and so we got very interested in what the chemistry of these fossils was that made them glow. If you just look at the fossil on the rock, they're almost indistinguishable from the rock itself, but they glowed a different color under the fluorescent scope. So, we started exploring the chemistry and discovered the fossils themselves contain a black polymer made of carbon and sulfur that, under the microscope, looks like the tar you see on the road. We also noticed there were just thousands and thousands and thousands of microalgae all around the fossils and coating the fossils themselves.” 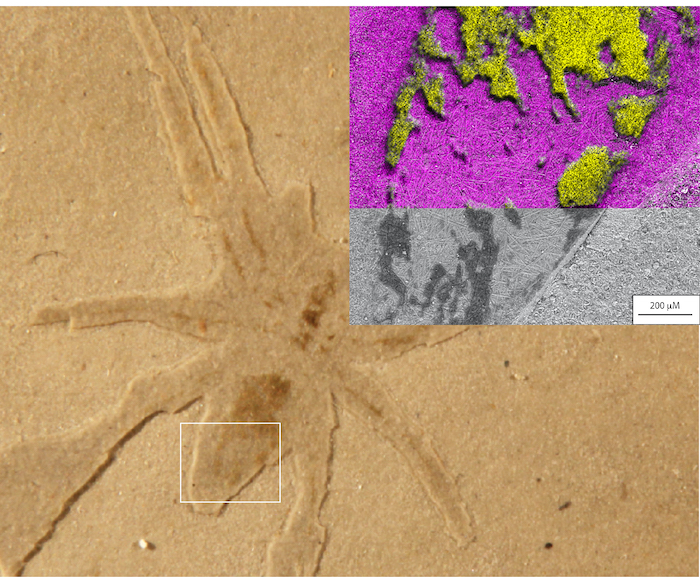 Olcott and her colleagues hypothesize that the extracellular substance these microalgae, called diatoms, are known to produce would have protected the spiders from oxygen and promoted sulfurization of the spiders, a chemical change that would explain preservation of the fossils as carbonaceous films over the millions of ensuing years.

Indeed, this sulfurization phenomenon is the same as a common industrial treatment used to preserve rubber.

“Vulcanization is a naturally occurring process — we do it ourselves to cure rubber in a well-known process,” Olcott said. “Sulfurization takes carbon and cross-links it with sulfur and stabilizes the carbon, which is why we do it to rubber to make it last longer. What I think happened here chemically is the spider exoskeleton is chitin, which is composed of long polymers with carbon units near each other, and it's a perfect environment to have the sulfur bridges come in and really stabilize things.”

Olcott said the presence of diatomic mats may potentially act as a guide to find more deposits of well-preserved fossils in the future.

“The next step is expanding these techniques to other deposits to see if preservation is tied to diatom mats,” she said. “Of all the other exceptional fossil preservation sites in the world in the Cenozoic Era, something like 80 percent of them are found in association with these microalgae. So, we’re wondering if this explains most of these fossil sites that we have in this time — basically from soon after the dinosaurs went extinct until now. This mechanism could be responsible for giving us information to explore the evolution of insects and other terrestrial life post-dinosaurs and to understand climate change, because there's a period of rapid climate change and these terrestrial organisms help us understand what happened to life last time climate started shifting.”

Olcott and her colleagues are the first to parse the chemistry of preservation at Aix-en-Provence, a fact she chalks up in part to challenges of carrying out science during COVID-19 restrictions.

“I honestly think this study is partially a result of pandemic science,” she said. “The first batch of these images showed up in May 2020. My lab was still closed; I was two months into my leg of 18 months at home with kids all the time — and so I had to change how I was doing science. I spent a lot of time with these images and these chemical maps and really sort of explored them in a way that they probably wouldn't have happened if all the labs were open and we could have gone in and done more conventional work.”

Top image: A fossilized spider from the Aix-en-Provence Formation in France, seen in a hand sample overlain with fluorescent microscopy image of the same fossil. Under normal lighting the spider fossil is hard to differentiate from the surrounding rock matrix, but when the fossil is excited by UV-illumination, its chemical composition causes it to auto-fluoresce brightly, revealing additional details of its preservation.

Middle image: Scanning electron image of a fossilized spider abdomen revealing a black polymer on the fossil and the presence of two kinds of microalgae: a mat of straight diatoms on the fossil and dispersed centric diatoms in the surrounding matrix. This image is overlain by chemical maps of sulphur (yellow) and silica (pink) revealing that while the microalgae are siliceous, the polymer covering the fossil is sulphur-rich.

Bottom image: Spider fossil from the Aix-en-Provence Formation with a white box indicating location of scanning electron microscopy image and chemical map of sulphur (yellow) and silica (pink) seen in upper left. Together these reveal a black sulphur-rich polymer on the fossil and the presence of two kinds of siliceous microalgae: a mat of straight diatoms on the fossil and dispersed centric diatoms in the surrounding matrix.