LAWRENCE — William Collins, University of Kansas associate professor of civil, environmental & architectural engineering, has received a Fulbright Scholar Award to conduct research for six months in Finland. Jointly funded by the VTT Technical Research Center of Finland and the Fulbright Finland Foundation, Collins was awarded the Fulbright-VTT Award in Science, Technology, and Innovation. 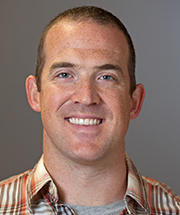 Beginning in January 2023, Collins will work with researchers at the VTT Technical Research Center in Espoo, Finland. The research will focus on fracture mechanics, which studies how cracks form and spread in materials. In particular, Collins aims to identify and bridge the gaps that exist between current industry practices and state-of-the-art work in the field of fracture mechanics.

Fulbright Scholar Awards are prestigious and competitive fellowships that provide unique opportunities for scholars to teach and conduct research abroad. The Fulbright U.S. Scholar Program offers over 400 awards in more than 130 countries.

According to Collins, many industries have practices based on an outdated understanding of fracture mechanics, which can result in overly conservative design codes causing higher costs; or design codes that are not conservative enough that could result in potential failures.

To address this issue, Collins’ proposed work in Finland will include the following:

The award will allow Collins to work with materials and applications that are outside of his primary area of research, which is focused on highway infrastructure. His collaborators in Finland are mechanical engineers who work primarily in the nuclear energy industry. The project aims to use the existing synergies in fracture mechanics to connect civil and mechanical engineering researchers.

“There are many well-respected fracture researchers at VTT, and I look forward to learning from them,” Collins said. “I hope that the relationships I build with them will continue upon my return to KU, resulting in long-term international collaborations.”

The award could also open up new funding opportunities and will result in improvements to the fracture mechanics course Collins teaches at KU.

The Fulbright Program is the flagship international educational exchange program sponsored by the U.S. government and is designed to build lasting connections between the people of the U.S. and the people of other countries. Since its establishment in 1946, the Fulbright Program has given more than 400,000 students, scholars, teachers, artists and scientists the opportunity to study, teach and conduct research, exchange ideas and contribute to finding solutions to shared international concerns.