Yanzhe (Jenny) Zhang, a senior from Beijing, China, was awarded the Courtwright Award for Undergraduate Research Excellence. Zhang is majoring in physics & astronomy and is mentored by Ian Lewis, associate professor of physics & astronomy. 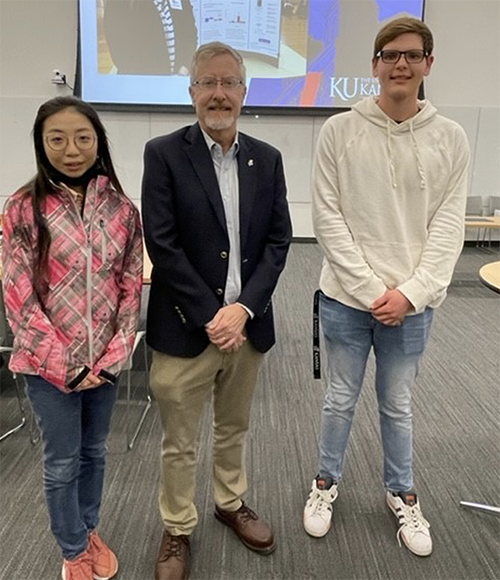 Zhang’s undergraduate research project focuses on particle physics and seeking out new physics to explain how the universe works. In her project, she conducts simulations of collisions between particles using Python, a computer programming language, and MadGraph5, a software for simulating particle collisions. Zhang’s work on this project began after taking Introduction to Quantum Mechanics with Lewis. Zhang has presented her research at multiple conferences including Particle Physics on the Plains, the American Physical Society (APS) Prairie Section and the APS Conference of Undergraduate Women in Physics, with plans to publish her research in a scientific journal. See Zhang’s research presentation at the 25th annual Undergraduate Research Symposium website.

The Courtwright Award for Undergraduate Research Excellence was established at KU Endowment in 2020 through the contributions of David (c’74) and Chris Courtwright (c’83, j’83). The Courtwright Award seeks to recognize undergraduate students with majors in the College of Liberal Arts & Sciences whose research and creative work stand to make meaningful contributions to their fields of study. Chris Courtwright attended the May 4 celebration along with Kade Townsend, the fall 2021 award winner. Zhang will receive $500 in addition to the previously issued $1,000 Undergraduate Research Award.

The Center for Undergraduate Research also announced the winners of two annual awards given to recognize undergraduate research mentors who make a difference in the lives of their students at KU. 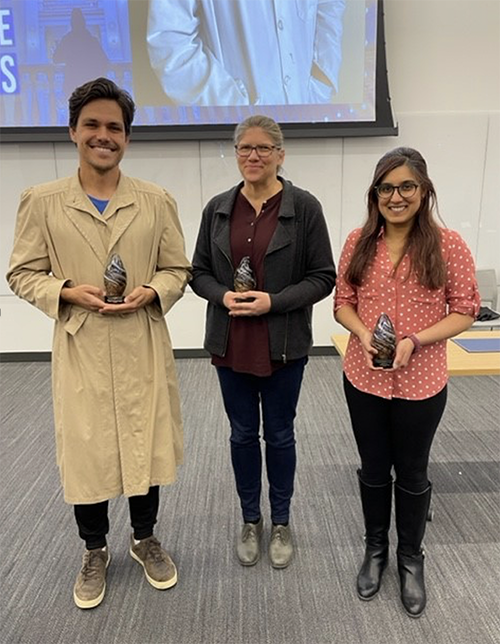 Hileman’s research focuses on the evolution of plant development. She has worked with numerous undergraduates in her lab on projects that include the genetics of flower color, fruit development, and microscopy and imaging techniques. She has also worked with undergraduates in the McNair Scholars and Emerging Scholars programs. Her students noted that Hileman provided exceptional mentorship throughout the whole process of research and beyond.

Srishti Baid, doctoral candidate in molecular biosciences, and Pietro Longo Hollanda De Mello, doctoral candidate in ecology & evolutionary biology, are the recipients of the 2022 Undergraduate Research Mentor Award.  This award was started in 2014 at the request of undergraduate students who wanted to recognize the important role that graduate students, postdoctoral researchers and academic staff play in mentoring undergraduate researchers at KU. Baid and De Mello will also receive $1,000.

Baid is studying the infectious bacterium Chlamydia trachomatis. She has mentored several students and taught them many useful laboratory skills including performing cell culture, microscopy imaging, protein-protein interaction techniques, cloning and other fundamental molecular biology techniques. Her undergraduate mentees expressed how valuable her investment in their success and growth as scientists was to them.

De Mello is studying the evolution of tropical reptiles and amphibians. He has mentored students in projects on color patterns of lizards, morphology and coding as well as a strong record of incorporating diversity, equity and inclusion efforts into his mentorship. His mentees noted how welcoming and inclusive he was.