LAWRENCE — Health communicators, medical professionals, politicians and even average citizens have struggled with ways to convince those hesitant about COVID-19 vaccines to get inoculated. New research from the University of Kansas shows that conversion messages, or two-sided narrative messages describing someone who was reluctant to be vaccinated but changed their mind, are more effective at convincing vaccine-hesitant people than one-sided messages advocating for vaccination. 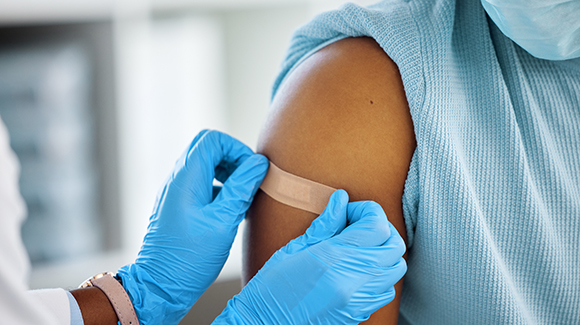 The idea of the conversion message has long been examined in religion, philosophy and rhetoric research, but it has only recently begun to be studied in communication sciences. In a religious context, the messages frequently tell the story of a person who changed their beliefs and how they came to follow a different faith.

A study led by Jeff Conlin, assistant professor of journalism & mass communications at KU, examined whether such messages, in which someone recounted how they changed their mind about vaccines, would be effective in encouraging pro-vaccine attitudes and intentions to get vaccinated. The results showed that conversion messages increased pro-vaccine attitudes and behavioral intentions among those who self-reported as high in vaccine hesitancy going into the study.

Written with co-authors Michelle Baker, Bingbing Zhang, Heather Shoenberger and Fuyuan Shen, all of Penn State University, it was published in the journal Health Communication. For the study, participants took an online survey in which they reported basic demographic information and expressed their attitudes and intentions to get vaccinated for COVID-19. They then were randomly assigned to one of three two-sided conversion messages or one of three one-sided advocacy messages. Participants were asked about the credibility of the message source, counterarguing, and again attitudes toward getting vaccinated, and if they intended to get a COVID-19 vaccine.

“We found conversion messages, when compared to advocacy messages, led to pro-vaccine attitudes and behavioral intentions in participants with high vaccine hesitancy. That’s probably the biggest takeaway of this research, along with the credibility of the message source mediating the effects of conversion messages on vaccination attitudes,” Conlin said. “Our findings show that these types of health messages are not a one-size-fits-all solution to encourage everyone to get vaccinated for COVID-19. Designing and using conversion messages requires a matching of psychological states between the source of the message and the audience exposed to the message.”

Participants who were assigned to a conversion message read about a person named Jamie who stated they were originally hesitant about receiving a COVID vaccine. However, after a conversation with a brother-in-law who was a physician and being assured the shots were safe and effective, Jamie changed their mind and reported intentions to get a vaccine when they became available.

The message author’s initial hesitancy matched with participants indicating high hesitancy going into the study, Conlin noted. For high vaccine-hesitant participants, the relationship between conversion messages and attitudes toward COVID-19 vaccinations was mediated through source credibility. However, for low vaccine-hesitant participants, mediation occurred through counterarguing, indicating they were looking for flaws in the message’s arguments or found themselves actively disagreeing with it.

The study was conducted in late 2020 and early 2021 while COVID-19 vaccines were receiving emergency approval, but were not yet available to the U.S. public. The researchers wanted to test different messaging approaches as they knew segments of the public would not automatically be open to getting the vaccines.

“We knew the vaccines were on the horizon and the concept of vaccine hesitancy was likely to play a role in uptake, because it has in other contexts,” Conlin said. “If someone is high in hesitancy, they’re less motivated to get vaccinated, which has implications on public health, so we wanted to look at that idea and test the persuasive effects of conversion messages in this emerging context.”

The results show initial promise to reach people who are hesitant toward vaccines, but the authors said further research is warranted. First, the sample was not large enough to be nationally representative, and the authors said they’d like to further test the messages with a more representative pool of participants with high vaccine hesitancy.

Also, the study was conducted right before vaccines were widely available, and they’d like to study conversion messages’ effectiveness with those who continue to be hesitant after more than a year of availability. Furthermore, both mass media and social media have exposed people to a great deal more information about vaccines both in favor of and detracting from them, and the availability of boosters could also play a role in attitudes and intentions.

Regardless of what future research finds, the study shows there is potential for use of conversion messages in communicating the availability and benefits of vaccines, the authors said. It also lends support to the importance of nuanced approaches to pro-health message design, especially about COVID vaccines, and the importance of using the right kind of message to reach specific audiences.