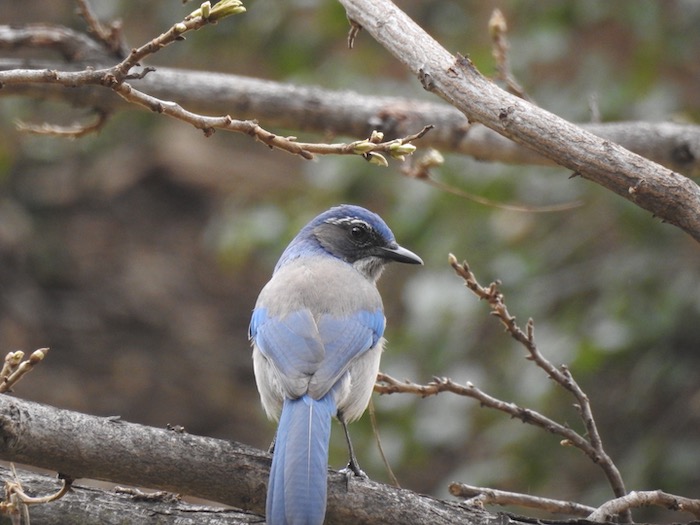 LAWRENCE — A comprehensive new genetic and statistical study from researchers at the University of Kansas reveals two groups of scrub jays — one in Mexico and one in Texas — deserve status as independent species. The paper, appearing in Systematic Biology, also uses genomic data to sketch a natural history of scrub jays, showing how geographic changes over millennia split up and reconnected groups of the birds, swaying the flow of genes between them. 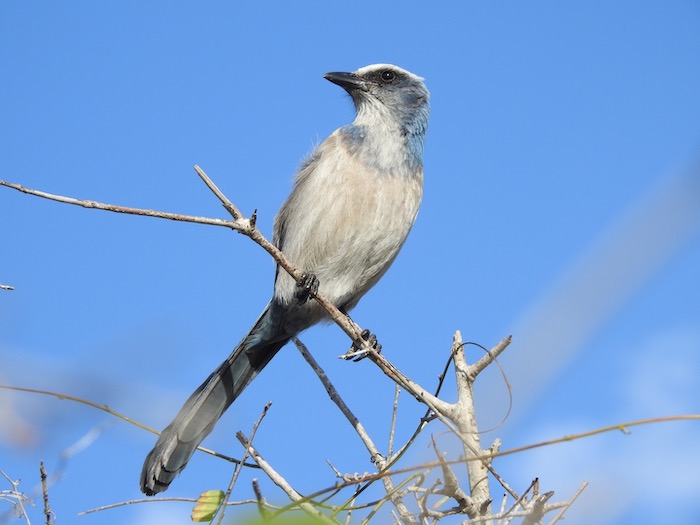 “Scrub jays are cousins to blue jays,” said lead author Devon DeRaad, doctoral student at the Biodiversity Institute and Natural History Museum at KU. “In the western U.S., they're common backyard birds for people, similar to blue jays that take peanuts from your feeder. They're exciting birds because they're charismatic — they'll come to your feeder and interact. They're jays, so they're extremely smart, and they have some of the best spatial memory of any birds. They can remember thousands of places that they've cached seeds and things like that.”

According to the study, genetic sequencing at KU of scrub jays collected decades ago reveals evidence of two distinct new species in Aphelocoma, the scrub jay’s genus: A. sumichrasti, a “phenotypically, behaviorally, and genetically unique” endemic species of southern Mexico; and A. texana, “a Texas-endemic species of conservation concern.”

“We weren't sure how different it was,” he said. “It's a bit of an isolated population on the Edwards Plateau in Texas — a restricted, small region of Texas. It was named as a subspecies so there are small phenotypic differences of size and the color, but it doesn't look too different from the rest. But we have this great geographic sampling and we sequenced birds nearby, but off the Edwards Plateau, and they're totally different and there doesn't seem to be any gene flow. We did as many analyses as we could think of to rigorously prove ourselves wrong, but everything indicates this population in Texas is totally distinct and evolving on its own isolated trajectory.”

DeRaad first became interested in the biodiversity of scrub jays upon learning the variety of specimens in museum collections indicated more species of scrub jay might exist than are currently recognized.

“My undergraduate adviser had published on this group of birds before and told me you can look at the specimens and see there are populations of Woodhouse’s scrub jay from Mexico and from other places that look totally different — but they're all recognized as part of a single species,” DeRaad said. “My goal was to use genetic methods for my Ph.D. and sequence DNA from these birds to figure out how many species there actually are.”

As a graduate student at KU, DeRaad accessed genetic samples of scrub jays collected decades ago by co-author A. Town Peterson, senior curator at the Biodiversity Institute and University Distinguished Professor in the Department of Ecology & Evolutionary Biology.

“He collected the specimens for his dissertation between around 1989 and 1992, and this was at the very beginning of people taking tissues from specimens,” DeRaad said. “It used to be you’d collect the birds and stuff them with cotton to make museum specimens — skin and feathers are very stable and will be fine in a drawer untreated if they're kept away from light and bugs. But before people were doing DNA analysis, they didn't know to keep the tissue. So, it's really cool that Town published analyses on these birds about 30 years ago with some of the earliest DNA methods, and we’re able to use literally the same tissues for this study.”

In addition to Peterson, DeRaad’s co-authors were Robert Moyle, senior curator at KU’s Biodiversity Institute, as well as John McCormack, of Occidental College, and Nancy Chen, of University of Rochester.

After DeRaad sampled DNA from the scrub jays, he then worked with the KU Genome Sequencing Core to sequence thousands of shared pieces of DNA from throughout the birds' genomes. In addition to determining the species-status of A. sumichrasti and A. texana, DeRaad and his colleagues sought to shed light on the natural history of scrub jays and draw a more accurate evolutionary tree for the birds.

For instance, the team found two scrub jay species living on a genetic tree with snarled branches, showing “complex signatures of both ancient and modern gene flow between the non-sister California Scrub-Jay (Aphelocoma californica) and Woodhouse’s Scrub-Jay (Aphelocoma woodhouseii) that result in discordant gene trees throughout the species’ genomes despite clear support for their overall isolation and species status.”

The evidence of interbreeding between the two scrub jay species traditionally might bar scientists from considering them separate species, but not in this case.

“We're coming to a more nuanced understanding of what a species is, allowing for the biological reality that evolution is more complicated than even people who study it could possibly imagine,” DeRaad said. “These lineages are constantly in the process of diverging and coming back together.”

In North America, the authors said many “complex speciation” histories are due to repeated ice ages when glaciers would split up populations — causing genetic divergence —then retreat leaving continuous habitat where those populations could interbreed.

“Trying to reconstruct that isn’t simple,” DeRaad said. “We don't have a time machine, so we'll never accurately reconstruct it all minute by minute — but by being able to get genomic data from thousands of pieces of DNA from all throughout the genome, we have much more statistical power to try to reconstruct those events than we did even just 10 to 15 years ago, before the sequencing technology was this good and affordable.”