“I was deeply saddened to learn of the death of John Haslam, a dedicated researcher who worked in pharmaceutical sciences at KU,” said Chancellor Douglas A. Girod. “On behalf of our entire university, I express my sincere condolences to his colleagues, his friends and his family.” 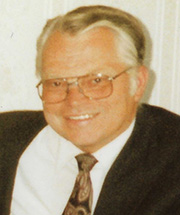 John Haslam received his doctorate in 1966 from the University of Utah, where he studied fast reaction kinetics. He subsequently explored enzyme kinetics as an NIH Postdoctoral Fellow at Cornell University. In 1968, he joined KU as an assistant professor of chemistry. In 1973, he transferred to INTERx, where he worked as a senior chemist with Takeru Higuchi. He then became a senior research fellow from 1980 to 1995 at INTERx, which had become a subsidiary of MERCK and Co., still in Lawrence. He continued to work as a formulator in Lawrence from 1997 to 2001. From 2001 to 2007, he worked as a research professor at the Higuchi Biosciences Center for Drug Delivery Research at KU. Then from 2007 until his death, he worked as a research professor for the Biopharmaceutical Innovation & Optimization Center in KU’s West District.

Haslam played a key role in the design, development and manufacture of many drug products used in clinical trials, some eventually FDA-approved.

He consistently worked at designing, manufacturing, analyzing and creating the means, methods and devices to study and understand a wide variety of delivery systems, according to colleagues. These included soft gel capsules, microporous coated controlled-release osmotic tablets for water soluble and lipid soluble drugs, multiparticulate forms of these osmotic systems, and osmotic systems utilizing sulfobutylether-β-cyclodextrin and its different salt forms.

Colleagues described Haslam as a hands-on, tireless inquisitor whose curiosity led to all kinds of formulations and drug delivery systems and devices as well the ability to make and modify the equipment necessary to analyze the performance of these dosage forms and systems.

Throughout his more than 54 years in Lawrence, Haslam’s contributions to the pharmaceutical sciences include 30 publications and 12 patents. His contributions to young scientists, as he patiently worked with graduate students in the Department of Pharmaceutical Chemistry, was always exemplary of the giving person that he was, colleagues said. Along the way, he helped colleagues and students succeed with their education, thesis research, projects, programs, drug approvals, patents and careers.

A service for Haslam took place July 15 in Lawrence. Donations can be made to the John Haslam Graduate Student Fund at KU Endowment.