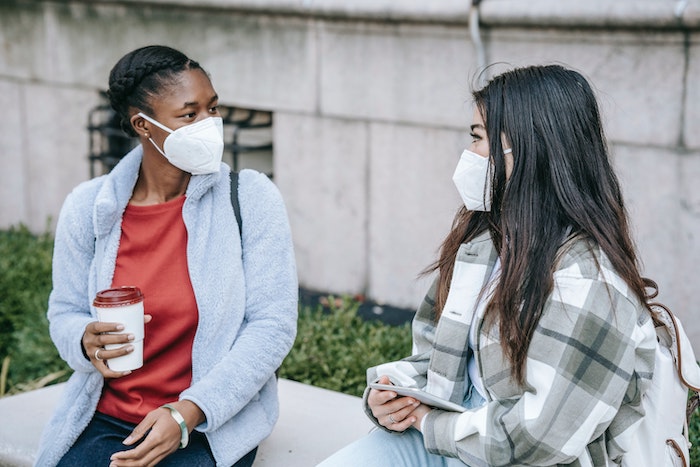 LAWRENCE — A new study just published in Journal of Applied Social Psychology debunks the idea that wearing a mask to slow the spread of disease damages most everyday social exchanges. 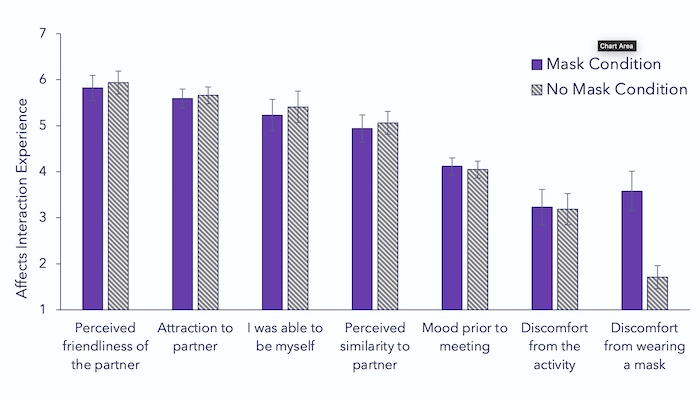 Reporting results from an experiment with 250 university students carried out in 2012 — before masks became fodder for political and cultural angst — psychology researchers based at the University of Kansas and Wellesley College found mask wearing “had no effect on the ease, authenticity, friendliness of the conversation, mood, discomfort or interestingness” of interactions between students.

Each student was instructed to chat with another participant who seemed like themselves, though the pair had to share the same gender and mask condition. Participants chatted with their partner for two minutes about their favorite vegetables, whether Pluto is a planet or the number of credits needed for their major. Afterward, they reported on their interactions via questionnaire.

“Actually, we were disappointed at the time because covering the face did almost nothing,” said lead author Chris Crandall, professor of psychology at KU. “It just really didn't change it much. It didn't make conversations awkward. People didn't think it was weird. They didn't make the conversations unfriendly. And they still found people to meet. There's a little slippage of how similar the other person was to them, but it was very modest. This was in 2012, and we set aside the data because we did this big interaction and we got nothing. Now, many years later we discover, ‘Oh, it's really quite meaningful.’ People have the skills to look past things that block the face — a mask, a hat, sunglasses and so on. We’re still able to get through to people.”

When choosing a discussion partner who seemed similar to themselves, masked participants only reported a significantly different experience from their unmasked counterparts in relying on the “look of their face and head” when picking. In important other measures, like “their friendliness,” or “seemed similar to me,” the masked vs. unmasked state made little difference, researchers found.

Previously, the team had run a similar student experiment, but instead of obscuring faces, half of the participants’ torsos were hidden with black plastic bags — a hindrance that skewed normal social interactions much more than the experiment with the masks, hats and shades.

“I was surprised by the results,” said co-author Angela Bahns, associate professor of psychology at Wellesley College. “We assigned people to wear masks or not because we thought masks would have an effect on who people interacted with and how the conversation went. Wearing the mask had almost no effects at all, except that people recognized they were wearing one. I think the biggest lesson to be learned from our study is that there is nothing inherent about wearing a mask that interferes with everyday social interactions. People — mostly grown-ups — have made mask wearing controversial in the era of COVID, politicizing the use of face masks so that the choice to wear one or not carries excess social meaning.”

In 2012, mask wearing hadn’t yet become a hot-button political issue, but the researchers did gather survey data on participants’ political leanings, among many other traits. At the time, a student’s stance along the conservative-liberal divide had no relationship with their attitude toward wearing a mask. “Wearing a mask, a hat and sunglasses did not impede liberals or conservatives,” the team reported. Omri Gillath, professor of psychology at KU, also served as a co-author.

“The research we did in 2012 can't be done today,” Crandall said. “There's just no way to do it, because when you say, ‘Put on a mask,’ people say, ‘Well, OK, you liberal Fauci follower, you’re a sheep for putting on the mask.’ Masks are suffused with meaning — political, social, health — in a way they weren’t then. Today, putting on a mask is a loss of liberty, so you might expect Republicans or conservatives could be more sensitive to losses of liberty and freedom — here, it was 'deep-state' professors trying to control their actions. You might think that conservatives, when assigned to the mask experiment, might be more resentful or more upset. We found nothing at all like that. So, I don't think putting on mask is a fundamental loss of freedom, except in the context of being told by Big Government to put on the mask for the purposes of safety to self and others.”

Stripped of today’s political and social significance, wearing masks didn’t interrupt social interaction for people of any political stripe in 2012. Indeed, the authors conclude, “The data have direct public health and policy implications — wearing masks does not end normalcy.”

“What do masks really do to social interactions? Well, at least for the everyday kind of interactions, you know, talking to somebody at the checkout counter, the grocery store, at the gas station or walking around — everyday kind of stuff with stranger interactions — masks just don't really do much at all in our setting,” Crandall said. “The question is, ‘What does masking up do?’ Aside from the underlying political effects, the answer seems to be not very much. Look, if you put on a mask and you go out on a first date, that's going to be more troublesome. But for most of the everyday interactions, which I think our experiment models, where you go talk to somebody about something not so important, we find masking isn’t anywhere near as disruptive as some people think — and that's really the good news.”

Top image: Reporting results from an experiment with 250 university students carried out in 2012 — before masks became fodder for political and cultural angst — psychology researchers based at the University of Kansas and Wellesley College found mask wearing “had no effect on the ease, authenticity, friendliness of the conversation, mood, discomfort or interestingness” of interactions between students. Credit: Charlotte May, Pexels.

Right image: How participants experienced the interaction according to wearing the mask, glasses and hat. Only “discomfort from wearing a mask” was affected by wearing a mask. Credit: Crandall, et al.