LAWRENCE — Bruce Lieberman, professor in the University of Kansas Department of Ecology & Evolutionary Biology and senior curator in the Division of Invertebrate Paleontology at the Biodiversity Institute & Natural History Museum, has been named director of the KU Paleontological Institute. He previously served as interim director from 2005 to 2007. 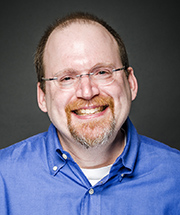 The institute, a unit of the KU Biodiversity Institute, produces the Treatise on Invertebrate Paleontology, a renowned source of current invertebrate paleontology knowledge with over 50 volumes published since 1953. The institute, in partnership with the KU Libraries, also publishes the monographic series KU Paleontological Contributions.

The Paleontological Institute was previously under the direction of Paul Selden, Gulf-Hedberg Distinguished Professor of Invertebrate Paleontology, from 2007 until his retirement in 2020. Bill Ausich of the Ohio State University’s School of Earth Sciences served as interim-chief-editor from July 2020 through July 2022.

“Professor Lieberman is a world expert on invertebrate paleontology, with extensive experience managing projects and an impressive track record of funding by federal agencies,” said Jorge Soberón, University Distinguished Professor and director of the Biodiversity Institute, who co-chaired the search committee. “He’ll maintain the tradition of the Treatise but has an exciting vision for moving it from a traditional monograph format to a digital resource for data.”

About Bruce Lieberman
Lieberman is a paleontologist and evolutionary biologist whose research focuses on macroevolutionary patterns and processes using the fossil record as well as the evolutionary history of invertebrates.

Lieberman joined the KU faculty in 1998. He has been a senior curator at the Biodiversity Institute since 2007 and a professor in the ecology & evolutionary biology department since 2012. He was a program director in the Division of Environmental Biology at the National Science Foundation from 2020 to 2021.