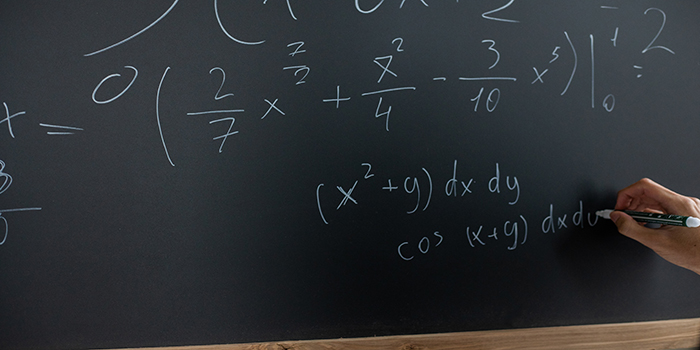 LAWRENCE — If you ask someone if they are a math or science person, they may quickly tell you yes or no. It turns out that how people answer that question in ninth grade and even earlier not only can tell you what subjects they prefer in school, but how likely they are to go on to study STEM subjects in college and work in those fields as adults. The results of a new study from the University of Kansas suggest the importance of fostering positive attitudes toward math and science early in students’ life to address gender and socioeconomic gaps in STEM.

KU researchers analyzed a nationwide data set that asked students if they consider themselves a math and/or science person in ninth grade in 2009. The survey then followed up with those students in 11th grade to ask the same question, then three years after graduation to see who had enrolled in science, technology, engineering and math (STEM) majors, and whether they intended to have a related career when they turned 30. The results not only support the importance of student attitudes on academic outcomes, they also suggest efforts should be focused more on cultivating positive attitudes earlier in student careers, before they get to college, where most of such efforts happen currently.

Rafael Quintana, assistant professor of educational psychology, and Argun Saatcioglu, professor of educational policy and sociology, both at KU, conducted a study in which they analyzed data from the High School Longitudinal Study of 2009. The data set includes responses from more than 21,000 students from about 940 schools across the United States. The study was published in the journal Socius: Sociological Research for a Dynamic World.

Those numbers are illustrative of how having positive experiences with math and science early can be influential both in higher education and later in life, the researchers said.

“What do we mean when we say education has long-lasting effects? That’s something we want to think about longitudinally,” Quintana said. “Those early experiences get ‘under the skin,’ as they are related to later outcomes independently of how these attitudes developed later. What this suggests is one, the importance of identity beliefs for career-related decisions, and two, that early experiences can have long-lasting, potentially irreversible effects.”

The data also showed that, when controlling for all other variables, the odds of expecting a career in a STEM field was about 50% lower for women than men and that there was a significant interaction between science identity in school and gender when predicting STEM occupation. In other words, it was more consequential for men to identify with science in ninth grade, as they were more likely to go on to a career in the sciences. Research has long noted a gender gap and socioeconomic inequalities in STEM, but most efforts have focused on how to address them among college students. While those efforts are just, Quintana said, the study results suggest it is important to take measures to address math and science inequities earlier in life as well.

Schools can play a long-term role in helping students believe they can have a career in STEM and visualize such a possibility. By providing equitable access to math and science programs, they can also provide chances to those who may not otherwise get them, the researchers said.

“We want schools to matter and have a consequential effect,” Saatcioglu said. “If you can get kids thinking they are a math or science person through positive experiences, that can have long-term effects. If you can get students to feel that way, it can be beneficial. The key in this study was Rafael was able to isolate the long-term effects of attitudes from ninth grade.”

The attitudes students hold in early high school are key, as they have a cascading effect.

“For example, individuals’ self- perceptions can affect the courses they take, the effort and time they spend on specific subjects and the interests and aspirations they develop,” the authors wrote. “These attitudes and behaviors can shape individuals career trajectories independently of their future identity beliefs. This ramification of causal effects is what generates the cascading and potentially irreversible consequences of early-life experiences.”

Quintana, who uses longitudinal data analysis to study problems in education and human development, said he also hopes to revisit the data in the future to see where those in the data set are now, and how many are still working in STEM fields. Such analysis could also be applied to understand other early educational experiences such as bullying and how they influence later choices, attitudes and career pathways.