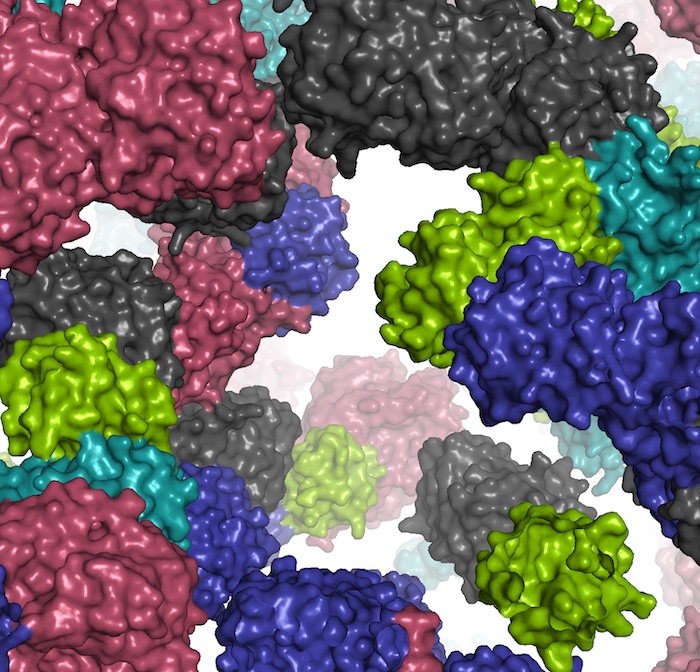 LAWRENCE — A milestone report from the University of Kansas appearing this week in the Proceedings of the National Academy of Sciences proposes a new technique for modeling molecular life with computers.

According to lead author Ilya Vakser, director of the Computational Biology Program and Center for Computational Biology and professor of molecular biosciences at KU, the investigation into computer modeling of life processes is a major step toward creating a working simulation of a living cell at atomic resolution. The advance promises new insights into the fundamental biology of a cell, as well as faster and more precise treatment of human disease.

“It is about tens or hundreds of thousands of times faster than the existing atomic resolution techniques,” Vakser said. “This provides unprecedented opportunities to characterize physiological mechanisms that now are far beyond the reach of computational modeling, to get insights into cellular mechanisms and to use this knowledge to improve our ability to treat diseases.”

Until now, a major hurdle to modeling cells via computer has been how to approach proteins and their interactions that lie at the heart of cellular processes. To date, established techniques for modeling protein interactions have depended on either “protein docking” or “molecular simulation.”

According to the investigators, both approaches have advantages and drawbacks. While protein docking algorithms are great for sampling spatial coordinates, they do not account for the “time coordinate,” or dynamics of protein interactions. By contrast, molecular simulations model dynamics well, but these simulations are too slow or low-resolution.

“Our proof-of-concept study bridges the two modeling methodologies, developing an approach that can reach unprecedented simulation timescales at all-atom resolution,” the authors wrote.

Vakser’s collaborators on the paper were Sergei Grudinin of the University of Grenoble Alpes in France; Eric Deeds of the University of California-Los Angeles; KU doctoral student Nathan Jenkins and Petras Kundrotas, assistant research professor with KU’s Computational Biology Program.

After conceptualizing how best to combine advantages of the two protein-modeling approaches, the team developed and coded an algorithm to drive the new simulation.

“The most difficult challenge was to develop the algorithm that adequately reflects the simple basic idea of the approach,” Vakser said.

But once they made that breakthrough, they could set about validating the new procedure.

“The paradigm was easy —a stroke of clarity,” Vakser said. “The existing simulation approaches spend most of the computing time traveling in low-probability — or high-energy — areas of the system. We all know where these areas are. Instead, the idea was to sample, or travel, only in the high-probability, low-energy areas, and to skip the low-probability ones by estimating the transition rates between the high-probability states. The paradigm is as old as the biomolecular modeling itself and has been widely used since the dawn of the modeling era decades ago.”

But Vakser said until his team’s new paper, the approach hadn’t been applied to the kinetics of protein interactions in cellular environment, the focus of their study.

“Because there are far fewer high-probability states than the low-probability ones, that gave us a huge gain in the speed of calculation — tens-to-hundreds of thousands of times,” Vakser said. “This was done without apparent loss of accuracy. One can argue accuracy was gained, because the simulation protocol is based on the ‘docking’ techniques, which are specifically designed for characterizing protein assemblies.”

The KU researcher said his cell-simulation method could be deployed to research human health and treat disease with a new level of precision.

According to Vakser, the new simulation technique offers many promising research avenues to explore going forward.

“Among them are adapting the approach to protein interactions with nucleic acids, RNA and DNA,” he said. “Also, we’d like to account for the flexibility of molecular shapes, correlate with the rapidly developing spectrum of experimental studies of the cellular environment and apply the procedure to a model of an actual cell — with its actual molecular components packed together.”