LAWRENCE – John Hoopes doesn’t begrudge anyone the chance to weave a fantastic tale based upon a kernel of historical truth. But he thinks Netflix is playing with fire by featuring Graham Hancock in the series “Ancient Apocalypse,” premiering Nov. 11.

Familiar with Hancock’s work for more than 30 years and having written scholarly as well as public commentary about him, Hoopes — a University of Kansas professor of anthropology — is available to comment on how pseudo-archaeology and Hancock’s writings align with and reinforce white-supremacist dogma. 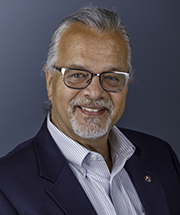 As a scholar and researcher, Hoopes specializes in the archaeology of southern Central America and northern South America. He distinguishes between actual, or scientific, archaeology and “the public vernacular perception of archaeology, which includes ancient aliens and shows on the History Channel and Graham Hancock's books and the stuff that you find in the grocery checkout counter or the airport book rack.”

One of Hoopes’ main complaints about Hancock and others like him comes down to the term “diffusionism” – the fallacy that knowledge or human development flowed from a single source at any given time in history.

“The history of civilization is not white European,” Hoopes said. “It's not Egyptian. It's not Mesopotamian. It's all over the world. And one of the core theoretical approaches in this pseudo-archaeology narrative is what archaeologists recognize as diffusionism, the idea that things began in only one place and then spread from there to everywhere else.”