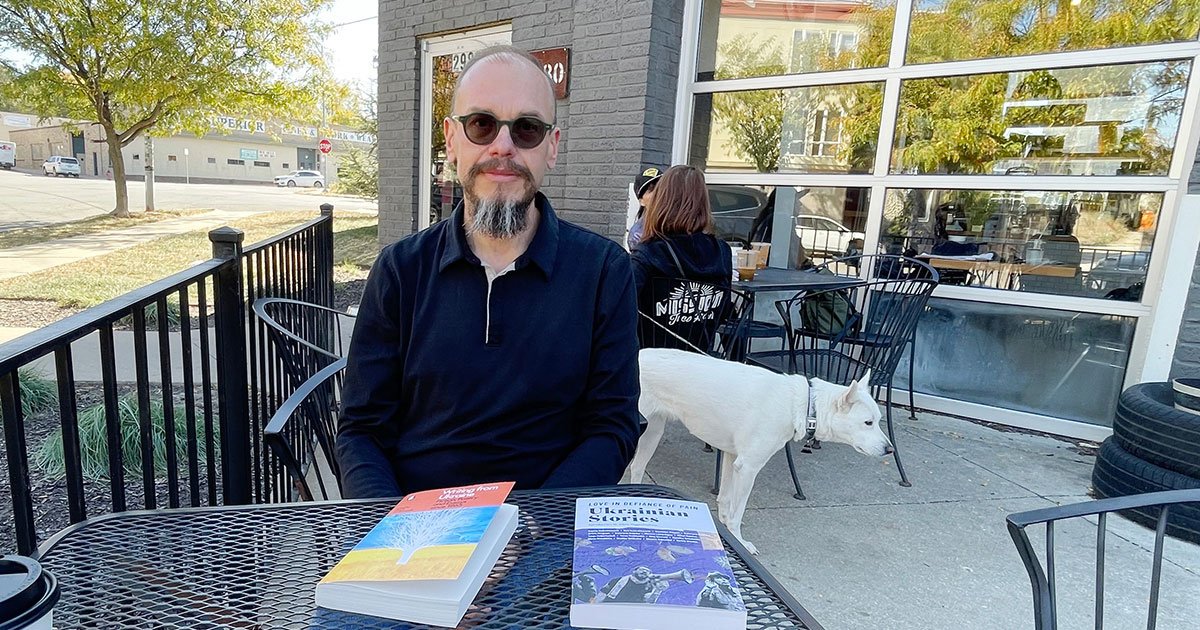 LAWRENCE – For nearly a generation, Odesa native Vitaly Chernetsky has brought a Ukrainian perspective to the English-speaking world through his literary translations.

That output continues, even as Ukraine suffers under the latest phase of Russian invasion and occupation.

This year, two collections have been published featuring translations Chernetsky has done for the members of what many consider the first family of Ukrainian writers.

“Love in Defiance of Pain: Ukrainian Stories” (Deep Vellum Publishing) and “Writing from Ukraine: Fiction, Poetry and Essays since 1965” (Penguin) both feature the same story by Sophia Andrukhovych titled “An Out-of-Tune Piano, an Accordion.”

“Love in Defiance of Pain” also features a story by her father, Yuri Andrukhovych, titled “Samiilo, or The Beautiful Brigand.”

Chernetsky, a professor in the University of Kansas Department of Slavic, German & Eurasian Studies, said Bondar currently has the highest popular profile of the three within Ukraine, being active on social media and having his essays published in the news media.

“For me,” Chernetsky said, “translation is not a chore but an excitement. It’s about sharing something that resonated strongly for me in one language and bringing it to an audience in another language. So I try to work with texts I really care about. I just felt that contemporary Ukrainian culture has so many important messages to share. The poems by Andriy are about a scrappy upstart, a kid from the wrong side of the tracks, stuck in a bad neighborhood, but having this resilience, and also finding all the richness and treasures around them.

“And, of course, now the world is watching with amazement as Ukraine, which they did not expect, puts up such a resistance against Russia. Hopefully, much of the world is getting inspired by what Ukraine has been doing and how the Ukrainian people are coping.”

Chernetsky said Bondar’s work, particularly his acclaimed poem “The Men of My Country,” reveals a resilience in spite of vulnerability.

“It's about living with trauma,” Chernetsky said. “It's about finding escape from loneliness in unexpected places. And in some ways, it’s about societal expectations of what a man should be. It's very much a meditation on masculinity and how it is transforming and changing; how it may be fragile and vulnerable. In his case — very much a heterosexual white man, happily married and all that kind of thing — he finds his vulnerability; he finds his sensitive side, and without being cheesy.”

Yuri Andrukhovych's story in “Love in Defiance of Pain” is a version of the opening chapter from a novel inspired by Jorge Luis Borges’ “The Universal History of Infamy.” In the end, Chernetsky said, it is a meditation “on whether a person is or is not a good fit for the time and the place where providence threw them in. And how do you make sense of that?”

This question has obvious parallels to the nation, Chernetsky said: “Being a Ukrainian evolves from being a complete misfit — not fitting anywhere — to actually finding the place and the meaning and a recognition.”

Sophia Andrukhovych’s story, “An Out-of-Tune Piano, an Accordion,” was inspired, Chernetsky said, by some of the local characters Sophia and Andriy encountered when they moved to a touristic area north of the capital, Kyiv, some years ago.

While Yuri Andrukhovych's work is already well-known internationally and has received numerous prizes (most recently the Heinrich Heine Prize from the city of Dusseldorf), Sophia Andrukhovych has the highest critical acclaim for recent writing among the three, Chernetsky said, and publishers are seeking to introduce her to an even wider audience with a short story, as opposed to her usual form, the novel.

“This is unusual for her to have a short piece,” he said, “but it does have the stylistic qualities of her other work … the magical in the ordinariness … something that is surreal in a positive sense.”

“She's also moving from writing things that were semi-autobiographical to observing others; people who are quirky, who are perhaps damaged or not normative on the mental health spectrum. But she is loving towards her characters. We get to know these people and to empathize with them. I find that her writing conveys very well a sense of empathy to people of different backgrounds and cultures, very much unlike herself. And this is something that relates to the essays she has been writing since the escalation of the war.”

All three of this family of writers, Chernetsky said, “are recognized as cultural ambassadors for Ukraine, and I think that is really important, because they do such different writing. This is just one more proof of how much talent there is and how diverse it is.”

Chernetsky said he “just happened to click” with each of them in one way or another.

“They are nice people who are friendly and warm,” he said. “Yes, they have their vulnerability, and sometimes they know how to turn vulnerability into strength. And that's something that we all can learn from.”