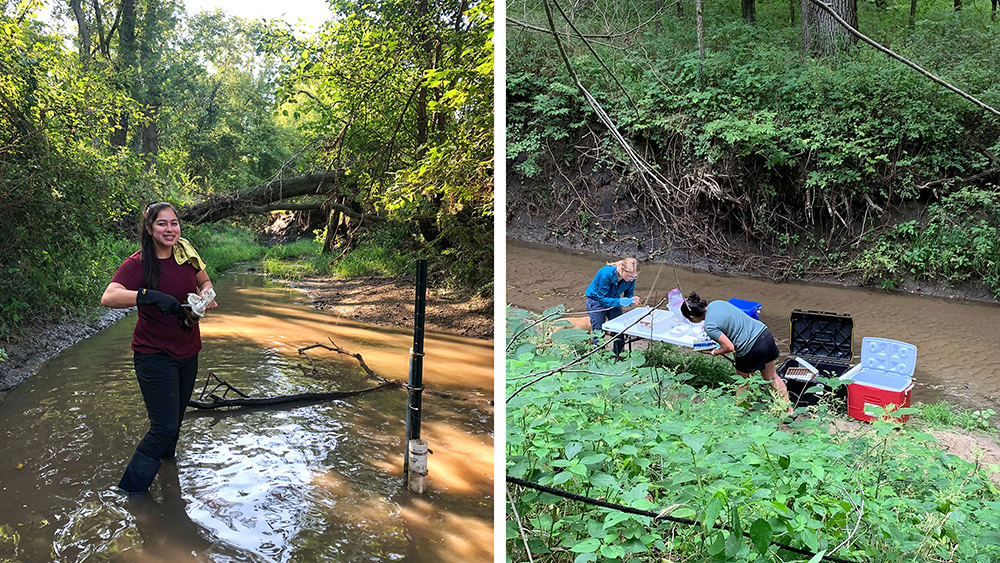 LAWRENCE — Kynser Wahwahsuck is a member of the Kickapoo Tribe in Kansas. For as long as she can remember, she has known that the tribe struggles to provide drinking water on the reservation — situated on 150,000 acres of tribal land about 60 miles north of Topeka — because of its aging water treatment plant.

The fact that she now finds herself in a position to improve this situation for her tribe is a testament to her tenacity, her deep care for community and planet, and the promise of a unique program that provides opportunities for Haskell Indian Nations University students to receive STEM training at the University of Kansas and potentially pursue advanced degrees and careers in science.

“Being able to rebuild the infrastructure for good water quality is something the tribe needs,” she said. “I’m hoping I can make a difference in this role.”

Wahwahsuck, who is also a descendant of Shoshone and Sac & Fox tribes, started a new job in July as the tribal climate resilience liaison for the Great Plains Tribal Water Alliance after graduating from KU in May with a master’s degree in ecology & evolutionary biology.

She is one of more than 125 American Indian/Alaska Native students who have participated in the Haskell-KU Bridges to the Baccalaureate Program. The program supports students from Haskell who seeking careers in biomedical, bioengineering, behavioral and environmental health fields by transferring to KU to access degree options not available at the tribal college. As the program enters its 21st year with a $1.2 million funding renewal from the National Institutes of Health, its leaders are introducing new features designed to help trainees see a place for themselves in bioscience careers, tap into a compassionate community of mentors invested in their success, build essential skills, remove financial barriers, and access a range of resources, networks and supports they need to thrive.

“This program is one of the longest KU-Haskell collaborations. Getting asked to lead it felt like winning the lottery,” said lead investigator Amy Burgin, professor of environmental studies and senior scientist at the Kansas Biological Survey & Center for Ecological Research. “It takes years to establish a program like this and to put together a record of effectiveness. I got to inherit all of that and then start to think about creative ways that we might adjust and continue building on that success.”

Success for the Bridge Program looks like more than 90% of students completing its requirements over the past 20 years and 73% of Bridge scholars graduating with a bachelor’s degree in the past decade — significantly higher than the overall graduation rates for Haskell and KU. Additionally, Bridge trainees complete graduate programs at twice the rate of the general American Indian/Alaska Native population.

That’s a trend the Bridge Program and its trainees would like to see continue. Very few Native students achieve higher degrees; just 77 earned science doctorates in 2018, according to the National Center for Science & Engineering Statistics. While other historically excluded groups have seen significant increases in the number of completed doctorates over the past 20 years — a leap of 51% for Latinx students and 45% for Black or African American students — Native American rates have decreased by 50%.

Hearing one of her mentors share that startling data at a conference motivated Wahwahsuck. 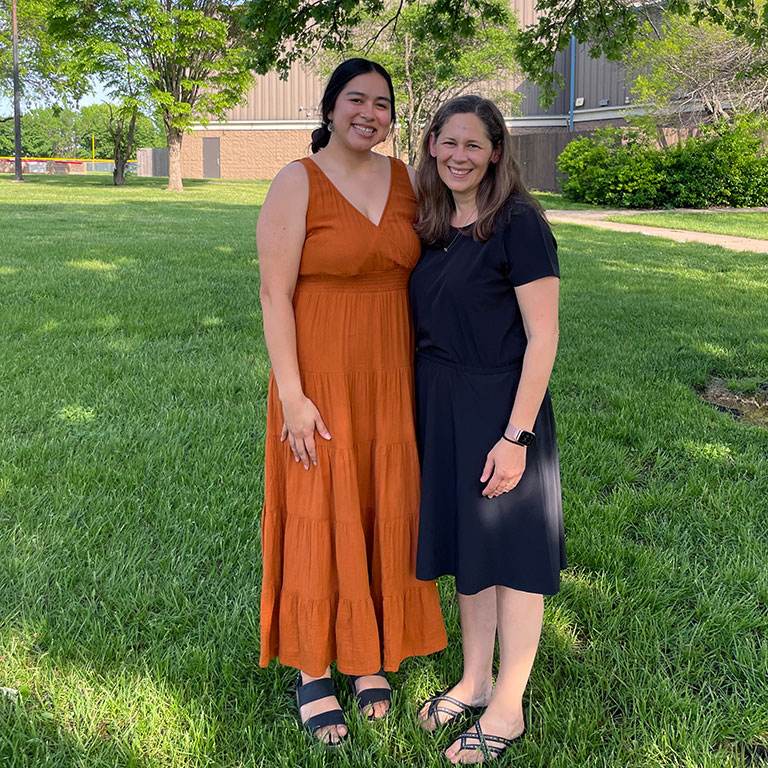 “That was the moment that I realized I wanted to go to grad school because of that low number,” she said. “I wanted to show myself that I could do it. I also have four younger brothers, and I wanted to show them that they can achieve anything they put their minds to. For myself, for my family and other Indigenous people — there is space for us in these places and in scientific research.”

The Bridge Program harnesses that motivation, helping students explore their interests and forge individual paths to scientific careers. Trainees gain hands-on foundational experience in KU labs. They connect with a mentor who helps nurture and guide their development as researchers. They pursue their own area of inquiry, conduct experiments, develop posters and present their research at symposia and conferences. They meet with each other to maintain cultural connections and share common experiences and concerns. And they engage in professional development, including hearing from alumni about how the Bridge Program helped them envision and achieve their education and career goals.

During the first year of the two-year program, Bridge trainees are enrolled at Haskell. In year two, they have the option to transfer to KU and engage in rigorous, mentored research. Program leaders note that only 20% of past Bridge trainees have transferred to KU or another four-year institution due to many factors, including the significant cost difference between KU and Haskell. The Bridge Program now offers a tuition benefit — a new feature for this funding cycle based on feedback from previous participants.

“We’re hoping that helps lower some of the cost barriers,” Burgin said. “We want these students to have the best of both worlds. To thrive, they need the preparation, sense of community and culturally aware support that Haskell provides so well, along with access to the different kinds of research options available at KU that can help them build STEM careers.”

Current tuition, fees and other expenses for a full-time KU student approach $20,000 annually, compared to a total cost of less than $1,000 at Haskell, where students are typically responsible for some fees but don’t pay tuition.

That’s not the only difference between the two institutions, whose campuses are separated by just a mile geographically but are worlds apart in other ways.

“It can be a huge culture shock for people to go from Haskell to KU in a short time. The amount of people on campus, the fact that you have to pay for parking — you can’t just park where your class is,” Wahwahsuck said. “Also, tribal diversity at Haskell is amazing. And, yeah, there’s diversity at KU, but sometimes it’s a little hard to see.”

One way the Bridge Program helps ease the transition is by connecting participants to KU’s First Nations Student Association. Wahwahsuck said being part of that group made her feel more comfortable at KU, like “you still have a sense of home after you leave Haskell.”

Like many students, Wahwahsuck went to college knowing she was interested in science but not certain exactly where that interest might lead. She was accepted to the Bridge Program and got her first research experience working in a KU laboratory that studied breast cancer. Through a few other KU internship opportunities, she discovered her passion for ecology and explored the effects of nitrogen pollution on biodiversity in hay fields and grasslands. Wahwahsuck didn’t actually bridge to KU for her undergraduate degree; instead, she earned her bachelor’s in environmental science at Haskell. But she returned to KU through the Postbaccalaureate Research Education Program, or PREP, which promotes diversity in biomedical research. That’s when she landed in Burgin’s lab and shifted her research focus to the effects of land use on headwater streams in northeast Kansas.

“This was important to me because my tribe resides in the watershed where I conducted my work,” Wahwahsuck said.

Helping strengthen and solve problems in tribal communities is a common motivation for Native students pursuing higher education. The Bridge Program strives to nurture that commitment by matching students with faculty mentors who are increasingly trained to co-build research experiences that incorporate Indigenous knowledge and ways of thinking and valuing — allowing students to connect their Native identity with their budding scientific identity. Bridge scholars also receive peer mentoring from a KU graduate student who attended Haskell and can offer perspectives and support from shared experience.

Wahwahsuck played that peer mentor role for Bridge trainees during graduate school and described the opportunity as a “full-circle moment where I was able to be the person to encourage them that they do belong in science.”

For her part, Wahwahsuck received that guidance and encouragement from Becky Welton, who has served as program manager for the Bridge Program for nearly 15 years. Welton has an office on the Haskell campus, where she builds relationships with students and recruits those who might be a good fit for the Bridge Program.

“That’s the best part of the job: interacting with the students,” Welton said. “You get to know them on a personal level. It’s very rewarding to see them grow and develop and succeed.”

She keeps tabs on every student who comes through the program and knows, off the top of her head, what many of them are doing now. That includes Wahwahsuck, whose role with the Great Plains Tribal Water Alliance perfectly marries the knowledge, experience and interests she cultivated at Haskell, KU and beyond.

“It’s crazy. I really called it my dream job when I was applying for it. It just felt surreal that I got it,” Wahwahsuck said. “It’s exactly what I want to do — work with tribal nations and help them combat climate change.”