LAWRENCE — The Emily Taylor Center for Women & Gender Equity at the University of Kansas has announced that Alicia Bunyan-Sampson, best known for her digital presence Polyamorous Black Girl, will give this year’s Jana Mackey Distinguished Lecture at 7 p.m. Nov. 16 in the Jayhawk Room of the Kansas Union. 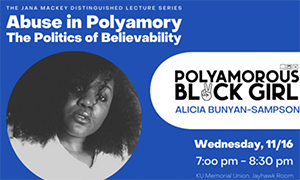 Bunyan-Sampson's lecture, titled "Abuse in Polyamory: The Politics of Believability," will directly challenge mainstream polyamorous education and its continued refusal to consider and acknowledge the unique ways abuse happens in polyamorous relationships, the impact of that refusal, as well as the ways in which trauma can complicate both the access to and the experience of polyamory. She will focus on digital space and its power to create and destroy connections.

Refreshments will be provided at the free and public event, and more information is available online.

KU established the Jana Mackey Distinguished Lecture Series in 2009 in honor and memory of a former student. Mackey, a feminist and activist, was murdered in 2008 by her ex-boyfriend. She dedicated her life to social justice and equality for all women. She was also the president of the student activist organization now called Students United for Reproductive and Gender Equity. Mackey was well-known in Kansas for her advocacy for women’s rights and victims of sexual assault and domestic violence. Past lecturers include Pulitzer Prize winner Connie Schultz; author and advocate Leslie Morgan Steiner; director of the NW Network for Bisexual, Trans, Lesbian, and Gay Survivors of Abuse Connie Burk and television host Melissa Harris-Perry.

People with disabilities are encouraged to attend KU-sponsored events. If you require a reasonable accommodation to participate, please contact the Emily Taylor Center for Women & Gender Equity at emilytaylorcenter@ku.edu.