LAWRENCE — Donald Whittemore, scientist emeritus at the Kansas Geological Survey whose groundbreaking work toward understanding and addressing a wide range of water resources issues in Kansas has touched every corner of the state, is the recipient of the Water Legacy Award presented by the Kansas Water Office. 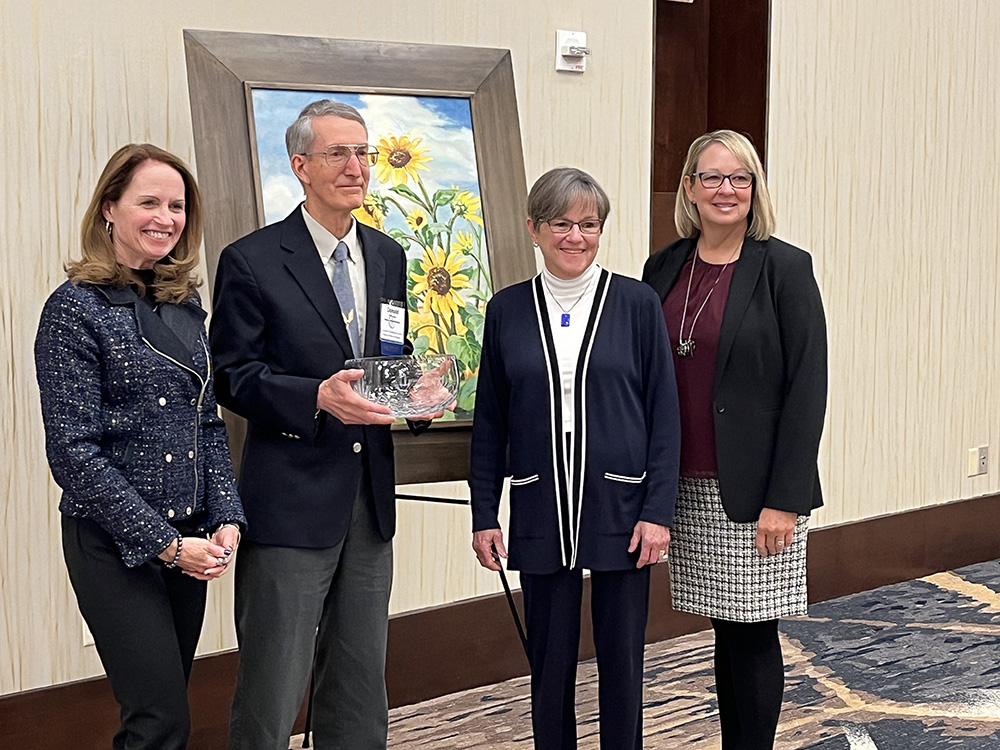 “Don, more than any other individual in the last century, has significantly enhanced our knowledge of Kansas groundwater and surface water resources,” said KGS senior scientist Jim Butler, who worked closely with Whittemore for more than 30 years and nominated him for the award. “Odds are high that if there’s a water issue facing the state, Don has seen it, studied it and can accurately comment on it. The state is incredibly fortunate that he chose to devote his career to Kansas water issues.”

Among his accomplishments, Whittemore developed a saltwater “fingerprinting” method used by state agencies and consultants to differentiate natural saltwater from saltwater contamination originating in oilfield brines, a significant source of groundwater pollution in central Kansas.

“Don’s work has been central to helping identify and control that contamination, driving everything from remediation efforts to litigation,” Butler said.

Over four decades, Whittemore’s water chemistry work resulted in a better understanding of water quality in Kansas aquifers and surface water on multiple fronts — groundwater pollution in the Equus Beds aquifer, one of the primary sources of water for Wichita; potable water prospects for the Dakota aquifer in western and central Kansas; prospects for groundwater-fed irrigation in western and south-central Kansas; and bromide problems in the Kansas River, among others.

“I am grateful to have had the opportunity to conduct research and service of value related to the water resources of Kansas,” Whittemore said. “Receiving the award is special to me because it means that water information users in Kansas have recognized the value of the work, as well as acknowledging the importance of research and data contributions from scientists and engineers in the state in general.”

Connie Owen, director of the Kansas Water Office, presented the award and noted that Whittemore is the first scientist to receive it. Previous awards have recognized the roles of agency heads and policymakers. “He truly leaves a legacy of knowledge that will be relied upon for generations, at the state, national and global levels,” Owen said.

Whittemore retired in 2017 after 44 years, but he continues to work with the KGS on several projects, including continuing his long-term efforts to bring greater attention to uranium contamination in the Arkansas River and High Plains aquifer in western Kansas. The uranium is naturally derived but is concentrated by evapotranspiration associated with irrigation and shallow reservoirs. The result is that the concentration of uranium in the Arkansas River as it crosses into Kansas from Colorado is above the maximum contaminant level set by the Environmental Protection Agency, a concern when the water is then used to irrigate fields or seeps into the aquifer west of Garden City.

“Without his commitment, the state would still largely be in the dark about this important issue for the future of Garden City and the agricultural areas to its immediate west,” Butler said.

The Kansas Geological Survey is a nonregulatory research and service division of the University of Kansas. KGS researchers study and provide information about the state's geologic resources and hazards, including groundwater, oil and natural gas, rocks and minerals, and earthquakes.