LAWRENCE — A University of Kansas researcher has been honored with one of the energy industry’s most prestigious awards. 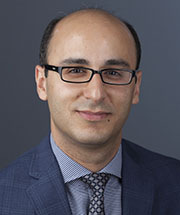 Masoud Kalantari, associate professor of chemical & petroleum engineering at KU, leads a group — which includes UCLA, MicroSilicon Inc. and EOG Resources Inc. — that is developing a system to make hydraulic fracturing more efficient for energy producers. The project was honored in early November with the “Breakthrough Research of the Year” award at the Abu Dhabi International Petroleum Exhibition & Conference (ADIPEC), sponsored by the Society of Petroleum Engineers.

The award is a “significant achievement,” Kalantari said. “It gives me and my team a great feeling in terms of being highly recognized in the international domain in presence of top oil and gas companies CEOs and energy ministers.”

“I am exceptionally proud of Dr. Kalantari and his team for being recognized for Breakthrough Research of the Year at the 2022 ADIPEC Awards,” said Susan Williams, chair of the Department of Chemical & Petroleum Engineering at KU. The research will have a significant impact on the economics and sustainability of the oil and gas industry, she said, and the partnership with UCLA, MicroSilicon and EOG Resources “provides an exceptional educational experience for our students at the University of Kansas.”

Hydraulic fracturing has been in widespread use for more than a decade to capture hard-to-reach oil in tricky geological formations, but it is an inefficient process: Energy companies rely on mostly indirect diagnostic methods to figure out where the fracks go and in mapping the fractures they’ve created to capture the most oil and gas at the smallest cost.

Kalantari’s $3.49 million project funded by the Department of Energy has been underway since 2019. It involves developing and field-testing wireless, battery-less, fine-size (as small as 250 micrometers, equal to 100 proppant size) smart microchip sensors coupled with a physics-informed, AI-based, iGeo-sensing platform that enables real-time, cost-efficient, continuous, high-resolution and “direct” fracture diagnostics.

The new technology will give engineers a better picture of complex subsurface fracture geometry, which means companies won’t have to drill so many unnecessary wells so they can minimize the environmental footprint and maximize profits to help achieve their net carbon zero goals.

ADIPEC is the world’s largest and most influential annual gathering of the energy industry. More than 160,000 people from 164 countries gathered in Abu Dhabi for the conference.

Kalantari’s project was chosen as a finalist — out of more than 1,000 entries for the 10 award categories — by a jury of experts that included executives and professionals from major energy companies, academics and members of other energy industry organizations. The awards jury included the ministers of energy and petroleum from the United Arab Emirates and Egypt, as well as the CEOs of several oil companies such as Occidental and Baker Hughes.

Among the attendees at the award ceremony was Linda Zarda Cook, a KU engineering alumna who now serves as CEO of Harbour Energy, a London-based oil and gas company.

“I was so happily surprised to see KU nominated for the first award presented that evening and then to be announced as the winner,” Cook said. “It made me very proud — and I was so pleased to be able to congratulate the recipient after he left the stage and share in his moment.”

Kalantari noted that the other two finalists for the award were both sponsored by Saudi Aramco, further demonstrating that KU researchers are innovating at the highest level. Aramco “has unlimited resources in terms of research and technology and money,” he said.

The award “opens up lots of opportunities for further implementation and deployment of this technology on a commercial scale,” Kalantari said. “But also it adds significant value to the entire research that I do at KU … whatever we do is at the highest possible quality and level, and is pretty competitive.”

A trial run of Kalantari’s technology is expected next year in the Permian Basin (a field operated by EOG Resource), which covers much of the southwest United States.