LAWRENCE — The University of Kansas community is mourning the death of professor Lorie A. Vanchena, who died Dec. 2 at the age of 61. 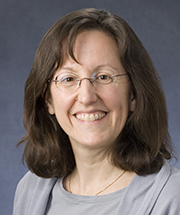 Vanchena was an associate professor in the Department of Slavic, German & Eurasian Studies and served as director of the Max Kade Center for German-American Studies. These are but two of the many forms of service she dedicated to the university since joining the faculty in 2008.

Vanchena’s academic work focused heavily on German Americans and German immigrants during the late 19th and early 20th centuries, which was reflected in her devotion to elevating immigrant voices through the Max Kade Center. Her academic research will continue to be remembered through her creation of the flourishing online course GERM 336: The German Transatlantic Experience, which the department is currently teaching and will continue to teach in future semesters. Likewise, her work will live on through her archive of German immigrant poetry written during the First World War.

“I am profoundly saddened to learn of the death of Professor Lorie Vanchena,” said Douglas A. Girod, University of Kansas chancellor. “She was a dedicated scholar, teacher and mentor to her students, and, on behalf of the entire university, I express my sincerest condolences to her family, friends and to all who knew her at KU.”

The importance of being a teacher and mentor resonated in all Vanchena’s work. As director of the Max Kade Center, she established connections with the KU Museum Studies program, through which she invited classes to utilize the center for their projects and mentored several interns who gained invaluable hands-on experience. Vanchena also proved instrumental to the redesign of the German Studies undergraduate curriculum, including revamping the senior capstone course to involve mentorship on individual research projects. Vanchena was awarded the J. Michael Young Academic Advisor Award in 2016, the K. Barbara Schowen Undergraduate Research Mentor Award in 2017 and the Dean’s Award for Exceptional Student Mentoring (Research Excellence Initiative) in 2017.

“When I first moved to Lawrence, Lorie was among the first to welcome me into to her home where we discovered a mutual love for classic film and animals,” wrote Andrea Meyertholen, Vanchena’s German Studies colleague. “Lorie's dedication and perseverance shone through in everything she did, most notably in her work for the department as undergraduate adviser and director of the Max Kade Center. I was always struck how Lorie worked to create moments of togetherness between the German studies department and the community — in and beyond KU. She not only invited those outside the department into the Max Kade Center with yearly series of lectures, but she also brought German out into the community through her work with the Watkins Museum of History. Her commitment to her work and to her friends as well as the volunteering she involved herself in will be greatly missed.”

Vanchena sought to make her scholarship public by interacting with the community around her. Beyond her work within KU, by pairing with the Museum Studies Program and Spencer Research Library, she also created connections with the Watkins Museum of History to further the awareness of Lawrence’s own German American legacy. In conjunction with her role as academic director of European studies, she served as chair of the World War I Centennial Commemoration and worked to commemorate the lasting effects of the war beyond scholarship.

“Lorie’s life exemplifies unmatched dedication to student mentoring, public-facing scholarship and community engagement,” said Nina Vyatkina, prior chair of KU German Studies. “As director of the Max Kade Center for German-American Studies, she worked tirelessly with many campus, community, national and international partners on curating books, archives and artwork related to German Americans and making these collections available to scholars, providing opportunities for student engagement, and bringing numerous guest speakers and other highly successful programs to campus and the wider community. She will be sorely missed by students and colleagues, but her legacy will live on.”