LAWRENCE — It is improbable that a child born in a remote village in 1960s China to a family of illiterate parents whose main concern in life was to find the next meal would grow up to become an internationally known scholar and educational leader. Yet, just as unlikely as that idea is, it is exactly what happened in the life of Yong Zhao. A new memoir tells the story of how University of Kansas professor not only survived his meager childhood circumstances but how what most would consider insurmountable disadvantages allowed him to use his mind, daydream and set his own course in life. 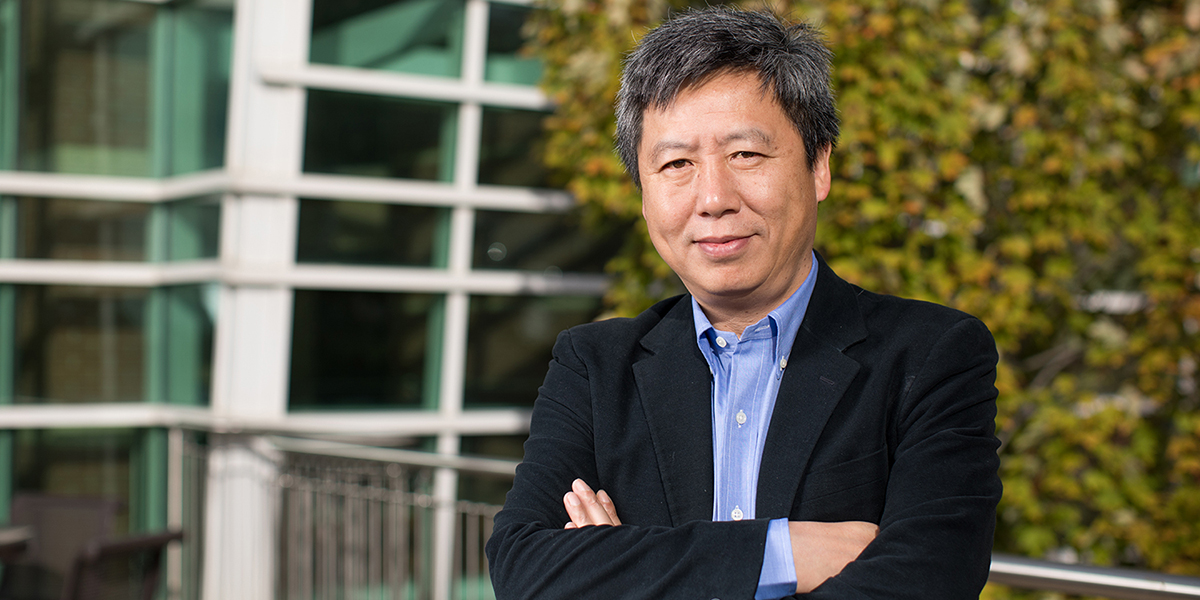 “Improbable Probabilities: The Unlikely Journey of Yong Zhao” is the latest book from the KU Foundation Distinguished Professor of Educational Leadership & Policy Studies. The book is not a typical memoir: When approached by his publisher to write an autobiography, Zhao initially was hesitant. But after talking with a colleague and fellow international education scholar G. Williamson “Bill” McDiarmid, he decided to write a book that told his story and how surviving and beating the odds can be a roadmap for educators to challenge the status quo of strict curriculum, rote memorization and standardized testing and instead allow all students to be self-actualized, individual learners.

“Everybody can tell you something valuable. You have a story, but what’s the point?” Zhao said. “I wanted Bill to be a co-author, and when I asked him, I said, ‘I have the data, but you can have an interesting perspective on what this is all a case of and what the story means.” 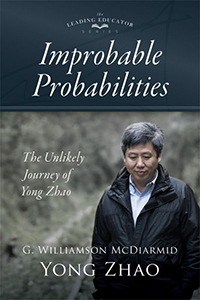 McDiarmid, dean and alumni distinguished professor emeritus at the University of North Carolina-Chapel Hill and distinguished chair of education at East China Normal University in Shanghai, is also an internationally-respected scholar. The two have been colleagues, collaborators and co-authors before writing “Improbable Probabilities.” They met weekly via Zoom for 14 months to bring the story together, deciding that Zhao’s life was a good illustration of evolutionary biologist Richard Lewontin’s triple helix theory. The idea holds that chance, genes and environment work together to determine how a person’s life plays out.

Zhao readily acknowledged that chance, or what some would call luck, largely played to his advantage. Born in a farming village in China’s Sichuan Province, he was the first son of a family that only saw five of 12 children survive to adulthood. Born in 1965, timing also played in his favor.

“Overall, if there is a lesson to learn from my story, it is that a person’s life story is impacted by luck,” Zhao said. “For example, if I had been born two years earlier, I probably wouldn’t be where I am, because the Great Leap Forward hadn’t ended. If I had been born 10 years later, I probably also wouldn’t be, because the Cultural Revolution would have likely prevented that.”

In addition to Zhao’s story, the book contains historical background on the events in Chinese history he refers to, including when Chairman Mao’s reforms led to an estimated 20 million people starving to death as well as the violence and unrest of the Cultural Revolution.

At first glance, genetics may not look like they’d work in Zhao’s favor either. His parents, both subsistence farmers, had little time to devote to any sort of scholarly pursuits. Their concern was not allowing their family to starve, something Zhao witnessed among others in his village. They set no expectations for him and demanded very little from their son.

“My illiterate parents really didn’t expect anything from me. So I was able to do what I wanted,” Zhao said. “I was also physically small and was considered not of value to the village, because I was not strong enough to be good at farm work. But that was an advantage, too, as I was able to use my mind.”

The book outlines how environment helped shape Zhao and lead to his success as well. Instead of the ideal of the rugged individual who succeeds through sheer determination, Zhao was fortunate to be surrounded by intelligent, encouraging people throughout his life who recognized his potential, allowed him to explore his own interests, supported his ideas even when the value was not immediately apparent and did not chastise him for breaking rules.

Through each chapter, the book chronicles Zhao’s journey through life and how his failures and successes can illustrate a path forward for educators to help today’s students. When he became one of the first in his village to attend college, he spent a good share of his time at the English-language bookstore, which allowed him to hone his English skills, led to a business opportunity as a translator and allowed him to make friends and professional connections that led him to the United States. Permission for Zhao to take on new challenges led to his creating new technologies in education and becoming an internationally recognized scholar. Similarly, he argues if students are allowed to pursue what interests them, they can find opportunities others might not see.

“Improbable Probabilities” also traces how the Chinese Communist crackdown on protests in Tiananmen Square in Beijing convinced Zhao his future was abroad. He was able to visit an American university on a chance encounter with an American scholar, and that led to a multidecade career in educational technology and policy. Zhao and McDiarmid argue that given the internet and technological advantages today’s students have, they are in a better place to explore the world and find what inspires them and guide their own learning, whether it be in their hometown or on another continent.

The book concludes with a broad summary of Zhao’s higher education career and scholarship and his focus on challenging the common orthodoxies of education policy and thought. Just as China for centuries demanded strict adherence to authority and rote memorization to identify talented government bureaucrats, American education this century has placed an emphasis on strict standardized testing. Both are mistaken, the authors argue, and stifle creativity in service of supposed accountability. Ironically, while China was placing an emphasis on westernizing its educational approach in recent years, American schools were shifting to a model like the Chinese in hopes it would help improve math scores. Both are mistaken in their insistence on strict curriculum and avoidance of identifying every student’s individual strengths and allowing them to guide their own learning, according to the authors.

While Zhao’s story may be improbable, the book is not intended to lionize someone who beat the odds through rugged individualism, glorify poverty or overthrow standardized teaching practices. Rather, his life is an example of how his fundamental arguments of reshaping education to give today’s students their best chance at success by empowering them as individual learners can allow more youths to get the most out of their school experience.

“Most of my life is funny if you look back,” Zhao said. “A lot of my opportunities were actually ways to avoid my shortcomings. In American education, people often say, ‘If you’re poor, things will get worse.’ I had a chance to take that thread of hope and run with it. No matter how bad things are, some good can come of it.”