LAWRENCE — Cliff Michaels will become the new executive director of the KU Center for Technology Commercialization, which assists University of Kansas researchers across all campuses in commercializing their discoveries. He will begin his position Jan. 17. 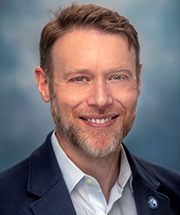 Since 2019, Michaels has served as an assistant vice president for research and the director of Georgia State University’s Office of Technology Transfer & Commercialization. During his time at Georgia State, Michaels spearheaded the creation and implementation of a new strategic vision to foster innovation and improve engagement with the GSU research community. He previously worked in Emory University’s Office of Technology Transfer, including as its interim executive director.

“Cliff’s extensive experience helping researchers commercialize their innovations and his highly collaborative style of management make him a fantastic person to lead our KUCTC team,” said David Vranicar, KU vice chancellor of technology commercialization and chief financial & business officer at KU Medical Center. “I welcome Cliff to KU and am excited to have him on board.”

The KU Center for Technology Commercialization collaborates with researchers on the Lawrence and medical center campuses to obtain intellectual property protection and commercial partnerships that enable KU discoveries to generate commercial impact. Typically, such commercialization occurs when KUCTC licenses KU-developed intellectual property to external for-profit entities (startups or established companies) that then further develop the technology into commercial products. When commercially successful, KU receives financial value in the form of royalties and other payments from the commercial entity.

Michaels is an active member of both the Association of University Technology Managers and the University Industry Demonstration Partnership. He is also a board member of Southeast Life Sciences. He earned a doctorate in neuroscience from Emory University and a bachelor’s degree in the same field from Lafayette College.

“I am tremendously enthused to be joining KU, an institution with a long history of high-caliber research and innovation,” Michaels said. “KUCTC has a strong foundation for supporting KU innovators, and I look forward to working with our faculty, administrators and other stakeholders to use that foundation as a springboard for the future.”

With KUCTC assistance, KU researchers have disclosed 305 inventions and received 149 U.S. patents in the past five years. In 2022, there were 45 active companies commercializing KU discoveries, 53% of which were located in Kansas.

Simon Atkinson, vice chancellor for research on KU’s Lawrence campus, has served as interim executive director of KUCTC since August 2020.