LAWRENCE — People looking for help in reducing their alcohol and other substance use often turn to 12-step programs. But while research shows that LGBTQ individuals are more likely to struggle with substance use issues than their peers, they also often face barriers to engaging in traditional treatment programs. A trial by University of Kansas researchers has found that SMART Recovery, a cognitive-behavioral mutual help group for addictive behaviors, holds potential for addressing LGBTQ-specific concerns with treatment and may be an effective part of recovery, though improvements can still be made.

KU researchers held several 12-session-long cohorts of SMART Recovery online with individuals who identify as LGBTQ. Following completion, they conducted in-depth interviews with 16 participants to learn more about their experiences and concerns. They found many appreciated taking part in an LGBTQ-specific treatment group and participating online, but they also noted there could be benefit to addressing additional challenges that are relevant to recovery, particularly emotion regulation and coping with unique challenges that LGBTQ people experience as members of stigmatized groups. 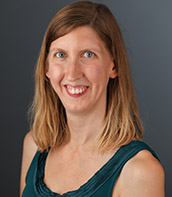 The study, led by Briana McGeough, assistant professor of social welfare at KU, was published in the journal Families in Society. It was written with co-authors M. Greenwood, social welfare student; Nicole Cohen, doctoral candidate in psychology, both at KU; and Angie Wootton of the University of California. The publication also won the Families in Society Best Practice Note award.

To better understand those barriers, McGeough, who conducts research in how LGBTQ individuals experience mental health and substance abuse treatment, wanted to better understand how the population experienced SMART Recovery. The original plan was to conduct the study in person, but the pandemic forced trials to move online.

“There were some real perks,” McGeough said of conducting the trials virtually. “We were able to recruit nationally, and people were able to travel and still join the meetings. We were also able to reach more rural areas, and there was more anonymity for people. The goal in these groups is that people support each other, and that did happen. Many said they really appreciated being in an LGBTQ-specific group.”

Some participants, however, said they would rather not focus on issues of sexual orientation or gender identity and simply discuss alcohol and substance use and recovery. The results also showed people experienced difficulty remembering some of the cognitive and behavioral tools discussed in the meetings and how they could apply them in their lives after the sessions concluded. That is consistent with other studies examining barriers to successful treatment, McGeough said, but can also be a concern as SMART Recovery is designed to have an end point and there is no expectation that people continue to attend meetings indefinitely.

Participants often had depression, anxiety, trauma or post-traumatic stress disorder, or they wanted to discuss strategies for regulating the difficult emotions that emerge from these mental health challenges. That was especially salient, McGeough said, as those issues often influenced an individual’s alcohol or substance consumption or could be exacerbated by substance use as well.

Finally, participants noted challenges they faced coping with discrimination or stigma in their daily lives because of their sexual orientation or gender identity. Those were often closely related to individuals’ struggles with alcohol and other substances.

Better understanding how the LGBTQ community experiences SMART Recovery can help improve how the program serves individuals who use it as part of their recovery. While the program can be effective, the shortcomings participants noted illustrate the need for mental health professionals to use it as part of a larger approach to well-being, McGeough said.

“I don’t know if all of those concerns can be addressed by one mutual support group, particularly since these groups are typically not facilitated by mental health professionals, so I think people using SMART Recovery should consider supplementing SMART with therapy or another mental health resource, particularly if they are experiencing mental health symptoms, like depression or anxiety. Therapists should potentially consider if SMART Recovery could serve as a piece of treatment, alongside therapy, for LGBTQ clients experiencing challenges with substance use,” McGeough said.

Finding the concerns LGBTQ individuals have while attending SMART Recovery is a first step, said McGeough, who plans to study the issue further, gauging its effectiveness for the population long-term and recommending strategies and improvements to the program to increase its effectiveness with those who struggle with alcohol and substance use and the unique experience of identifying as LGBTQ.