LAWRENCE — A $58 million gift from the estate of late University of Kansas alumni Madison “Al” and Lila Self will provide direct support to benefit students. With their lifetime and estate gifts, the Selfs donated $106 million to KU, making them the most generous private donors to date in the history of the university. 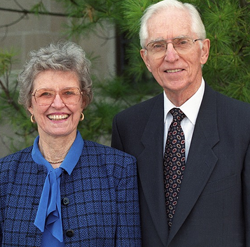 The Selfs passed away in 2013, Al in January and Lila in November, both at the age of 91. Modest beginnings didn’t hamper their future success. Raised on Kansas farms, they met as KU students. In 1943, Al earned a bachelor’s degree in chemical engineering, and they married that summer.

Al is originally from Meriden. Lila is from the Fall Leaf community near Eudora.

Their gift is the largest to date as part of Far Above: The Campaign for Kansas. Their contributions also place them among the most generous benefactors to graduate students at a public university in the U.S.

Of the $58 million gift, $39 million will be added to the Self Graduate Fellowship Fund for doctoral students in STEM disciplines, business and economics; and $15 million to the Self Engineering Leadership Fellows Program, which benefits engineering and computing undergraduate students. The remaining $4 million establishes a new Self Graduating Senior Fellowship Fund to recognize graduating seniors for their achievements, as well as for their ability to attain goals that require exceptional tenacity.

Chancellor Bernadette Gray-Little said she had the privilege of meeting the Selfs several times, including during what would be their final visit to campus in 2011. “Lila and Al were dedicated to contributing to the personal growth of KU students so they can become the leaders our society needs,” she said. “Their gift will benefit generations of KU students whose innovations and ideas will create prosperity and well-being long into the future.”

The university celebrated a public kickoff for Far Above: The Campaign for Kansas in April 2012 with a timeline of completing the campaign in 2016. With this gift, the initial goal of $1.2 billion has been reached, but the campaign will continue through 2016.

“We are grateful to the Selfs for this remarkable gift that helped us achieve our initial campaign goal, but we have more work to do,” said Kurt Watson, who chairs the campaign with his wife, Sue. “Though we have accomplished much through this campaign, some of our fundraising imperatives remain. To take us to the finish line, we are confident that our loyal alumni and friends will take KU to even greater heights.”

The remainder of the Far Above campaign will focus on support for students and faculty through additional scholarships, fellowships and professorships, as well as facilities that directly enhance teaching, research and patient care.

In 1947, the Selfs acquired Bee Chemical Co. in Lansing, Illinois. Al guided the firm from a three-person operation to an international producer of polymers and polymer coatings for use on plastics. When they sold the company 37 years later, it had five U.S. manufacturing sites and operations in Japan and England. Al later served as chairman and CEO of Tioga International and as president of Allen Financial.

“Throughout the nearly 25 years that I knew Al and Lila Self, they remained committed to KU and were steadfast in their support of students,” said Dale Seuferling, president of KU Endowment. “Their legacy of thoughtfulness and generosity will live on in perpetuity by advancing discovery, innovation and entrepreneurship through the educational experiences of future generations.”

In 2000, Al Self was honored with the School of Engineering’s Distinguished Engineering Service Award. The university awarded him the Distinguished Service Citation in 1997. He was a Life Trustee of KU Endowment.

Far Above: The Campaign for Kansas seeks support to educate future leaders, advance medicine, accelerate discovery and drive economic growth to seize the opportunities of the future. The campaign is managed by KU Endowment, the independent, nonprofit organization serving as the official fundraising and fund-management organization for KU. Founded in 1891, KU Endowment was the first foundation of its kind at a U.S. public university.

Michael Branicky, dean of the School of Engineering: “Al and Lila Self’s generosity and vision enables us to enhance our program and build its position as the premier engineering leadership program in the nation. This gift ensures we’ll continue to attract the best and brightest young minds – and the future leaders the world needs – to KU.”

Michael C. Roberts, dean of Graduate Studies: “This gift will make it possible for KU to recruit more high-ability graduate students who fit the Self Graduate Fellowship goals of making a difference in the world. The benefits of the Selfs’ support will extend far into the future.”