LAWRENCE — When University of Kansas students return to the School of Engineering at the start of the spring semester, they’ll find a familiar face and name occupying the dean’s office. Arvin Agah, interim dean of engineering and professor of electrical engineering & computer science, has been chosen to be the next dean of the engineering school effective Jan. 22.

“I have immense confidence that Arvin will be a strong leader capable of moving the school forward to new achievements,” Lejuez said. “Over the past several months I’ve had the opportunity to observe how he works with and supports the faculty, students and staff of the school. I know he brings great energy to the role that complements his knowledge and ability to partner with business and industry in fresh ways. His extensive experience with the school and with KU also provides valuable stability.” 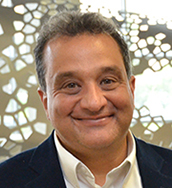 The School of Engineering represents KU’s second-largest academic unit on the Lawrence and Edwards campuses, with more than 3,000 students. The school has dramatically expanded its facilities since 2012, adding five new buildings and 325,000 square feet of world-class research labs, state-of-the-art classrooms and enhanced collaboration spaces. In the past six years, the school has seen a 29 percent increase in bachelor’s degrees awarded and 15 percent increase in graduate degrees awarded. The school has the highest percentage of female engineering students and the highest percentage of women earning degrees of any engineering program in Kansas. Faculty in the school lead and contribute to a number of research endeavors and major research centers at KU.

Agah has been serving as interim dean of the school since July 2018, filling the role made vacant when the previous dean, Professor Michael Branicky, opted to return to a faculty role. Agah has been a member of the KU Engineering leadership team since September 2012, when he was selected to be associate dean for research and graduate programs. He’s a decorated educator who has been on the KU faculty since 1997, and he has served as associate chair for graduate studies for the Department of Electrical Engineering & Computer Science.

Agah's research focuses on applied artificial intelligence and mobile robotics. He has been a co-investigator on research grants totaling over $33 million. From 2007 to 2012, he was laboratory director of the Intelligent Systems Lab at KU’s Information & Telecommunication Technology Center. He is a prolific author and has served as an editor of three books, and he has published over 100 refereed articles.

Agah has supervised 20 doctoral students, 40 masters students and 44 undergraduate students in research endeavors. He has received multiple honors for his teaching excellence, including two universitywide awards. He has taught short courses at Elizabeth City State University, the University of Canterbury in New Zealand and the University of Tsukuba in Japan.

Lejuez expressed appreciation for those who provided input during the search process.

“I want to thank all those who took part in the interview process and provided feedback,” he said. “I am especially grateful to the members of the search committee, led by Dean of Pharmacy Ken Audus, for their considerable efforts. Working without an external consultant, the committee developed a strong applicant pool and completed their responsibilities with amazing speed. Their swift and thorough action provided a gift of stability that sets the stage for the future success of the School of Engineering.”