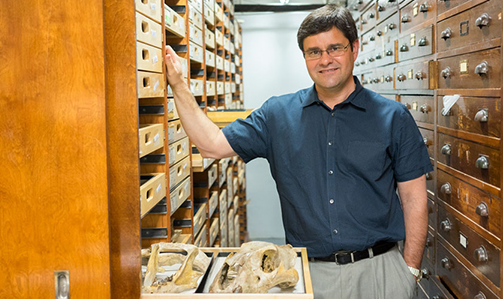 LAWRENCE — K. Christopher Beard, Foundation Distinguished Professor of ecology and evolutionary biology at the University of Kansas, will deliver his inaugural lecture at 5:30 p.m. Tuesday, Sept. 29, in the Kansas Room of the Kansas Union.

Beard, senior curator at the KU Biodiversity Institute, is an award-winning vertebrate paleontologist interested in the origin and early evolution of primates and how changes in the Earth’s physical environment have influenced Cenozoic mammals. The lecture, “Biogeography and Primate Evolution: Scientific Constraints on Improbable Events,” focuses on the fossil record, ancient climate change and continental drift to provide an explanation of how living and fossil anthropoids — the group that includes monkeys, apes and humans — wound up where they are found today.

Beard joined KU in 2014 as one of the university’s first Foundation Distinguished Professors. He had been the Mary R. Dawson Chair of Vertebrate Paleontology at the Carnegie Museum of Natural History, where he worked in various positions since 1989. From 2004 to 2014 he also served as an adjunct professor at the University of Pittsburgh. In 2010 he was a visiting professor at the College de France in Paris.

In 2000, Beard received a MacArthur Fellowship — often called the “Genius Grant” — from the John D. and Catherine T. MacArthur Foundation. Beard is a prolific author with more than 100 peer-reviewed articles, chapters and book reviews. His 2004 book, “The Hunt for the Dawn Monkey,” was recognized with the Phi Beta Kappa Society Science Book Award and the W.W. Howells Book Award from the American Anthropological Association.

Beard studies the origin and early evolutionary history of primates and other mammals. Longstanding focal points of Beard’s research have included the macro-evolutionary events surrounding the origin of the order Primates and its major clades, particularly anthropoids. Another priority is to document and interpret major episodes of faunal turnover in the fossil record, especially that which transpired across the Paleocene-Eocene boundary. Beard is especially interested in understanding how changes in the Earth’s physical environment, including major tectonic events and ancient episodes of climate change, have affected the biogeography and evolutionary history of primates and other mammals. Current field projects are both domestic and international in scope, ranging from the Paleocene and Eocene epochs found in southwestern Wyoming to the early Cenozoic period in China, Myanmar, Turkey and Libya.

The Foundation Distinguished Professors initiative is a unique partnership between the university and the state of Kansas to attract 12 eminent scholars to support one or more of the university’s four strategic initiative themes. Beard earned a bachelor's degree in anthropology/zoology in 1984 from the University of North Carolina, Chapel Hill. He holds a doctorate in functional anatomy and evolution from the Johns Hopkins University School of Medicine.