LAWRENCE — Student-led teams from the University of Kansas School of Engineering are participating in a number of intercollegiate competitions this spring, designing and building everything from remote-controlled airplanes to drones to concrete canoes and more. 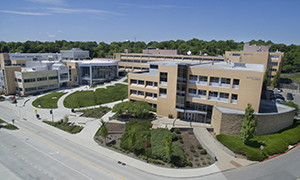 One benefit of the competitions: They let students take skills learned in the classroom and apply them to real — if small — design-and-build projects.

“The competitions are a great way to measure our students' abilities against students from another school. That's one way we can see whether we're doing a good job,” said Lorin Maletsky, associate dean for undergraduate programs. “I think students really enjoy doing that. It's fun to watch the Jayhawks on the basketball court, but we can also see how we stack up against our peers in other arenas. It causes students to up their game and work that much harder.”

There are a number of teams from a variety of engineering disciplines competing this spring:

The concrete canoe team will compete April 12-13 at the University of Oklahoma in a competition sponsored by the American Society of Civil Engineers.

The competition is judged in several phases: The team must create a written presentation describing the design-and-build process, an oral presentation highlighting their craft’s features, display their canoe and poster with details about the construction, and then — the fun part — put it in the water and race it.

“You get to learn a lot about civil and architectural engineering concepts — concrete, reinforcement of concrete, how to test it, how to mix it, as well as structural analysis,” Roubinek said. “There's the technical aspect, but there's also the fun aspect: At the end of the day we're making a canoe out of a material a canoe should not be made of, so we try to have fun with it.”

The winners will move on to an international competition, held in September in London, featuring five student teams from each participating country — the U.S., United Kingdom and China. Teams will be judged on a project that mixes innovation, design and business development while addressing a major challenge facing society and the planet.

Andrew Williams, director of IHAWKe and associate dean for diversity, equity & inclusion, said KU’s entry uses AI technology to help workers with intellectual and developmental disabilities to be more productive in the workplace and increase their personal earnings.

Participation in the competitions should help KU engineering students as they prepare to start their careers, Maletsky said.

“It gives them more experience, forces them to interact with peers, shows them how you set a budget and how to deal with a myriad of tasks, similar to what you'd do on the job,” he said. “It’s real-world experience.”

The KU Information Security Club, known as the Jayhackers, will travel to Kansas State University on April 14 to participate in a cyberdefense competition.

"We act as a company's IT team — they give us a scenario,” said team treasurer Noah Brabec, a junior from Olathe. “In previous competitions, we’ve pretended to be a Soviet bloc bank's security team. We secure systems, then they bring in professional penetration testers to see how well we secured our systems.”

Club members can be familiar with cybersecurity best practices, Brabec said, but he acknowledged “you can’t really practice” for such competitions.

“It gives us access to a wide array of technology and systems we usually wouldn't see in our degree programs, and it gives the chance to apply knowledge to real-world scenarios,” he said. “It's important to keep security in mind, especially when everything is on the internet now.”

The Jayhawk Aero Design competed at the SAE Aero Design East competition at Fort Worth in early March.

Joe Block, a senior in aerospace engineering objective from Chaska, Minnesota, was co-captain of the team whose task was to design and build a remote-controlled aircraft — with a 12-foot wingspan, weighing no more than 55 pounds — capable of carrying a heavy load.

The team is one of the newest at KU.

“Probably the biggest challenge is turning a design — something you see in your head — into something you actually build,” Block said. “There've been several times when something's been designed and we have to reconsider because those pieces don't actually fit together. It's really a process of trial and error.”

He said another benefit of the competition is learning to think on the fly: During the 2018 competition, for example, the team had to hustle to make repairs after their plane’s wing broke on its first flight attempt. Responding successfully “gives you a level of confidence when things don't go right,” Block said, “which is important in engineering.”

The team will also participate in a flyoff sponsored by the American Institute of Aeronautics and Astronautics, which will be April 11-14 in Tucson, Arizona.

The Jayhawk Motorsports Baja team will take its off-road vehicle to the regional SAE Baja competition April 11-14 in Cookeville, Tennessee. Each team's objective is to design and build a single-seat, all-terrain vehicle.

Saif Alexander Merchant, a junior in mechanical engineering, is team captain. He said the team is altering its approach this year — instead of making many small tweaks to improve last year’s competition design, this year members focused on making one big change: Instead of buying a transmission, as usual, the team designed and built its own custom gearbox for the car.

“It saves us 30 pounds — weight is everything in this competition,” Merchant said.

The competition includes several elements, including a race.

The Jayhawk Motorsports Formula Car team is designing and building a Formula-style race car for SAE competitions May 8-11 in Michigan and June 19-22 in Lincoln, Nebraska.

“We're trying to make the car overall more agile — decrease the weight so the car is overall a lot lighter,” said team captain Michael Kitchen, a senior in mechanical engineering from Olathe. “With an increased aero package, we can shave off seconds — we've been really focused on that this year.”

Going through the design-build process is important for students, Kitchen said, because it offers lessons that aren’t imparted in the classroom.

“One of the things that's difficult to teach, even in a classroom, is the iterative approach it takes to design a project. You need that hands-on experience,” he said. “Even when you're designing there are a whole lot of unknowns — the only way is to produce a prototype, implement it, test it and find out if it works.”

This year’s car will be unveiled to the public April 28 at Abe & Jake’s Landing in Lawrence.

“You're challenged to build a bridge that's at one-tenth scale — this year it's 22 feet long,” said Briceson Junge, a Lawrence senior in civil engineering. “You have to design it yourself — we use professional software to do analysis — and it has to hold a weight of 2,500 pounds in the end.”

Students design the bridge, build it in pieces, then assemble at competition — one element of the competition times the team on how fast the bridge can be put together.

“When you go out to the field, a lot of engineering projects are very big,” Junge said. “This gives an idea what it looks like in the field, from conception to follow-through. It's a valuable experience.”