LAWRENCE — Rondy Malik, a postdoctoral researcher in the lab of KU Foundation Distinguished Professor Jim Bever, has been named a “Rising Star” on a list of “1,000 inspiring Black scientists in America.” The list was compiled by Cell Mentor, an online resource maintained by Cell Press, a publisher of open-access research journals on cellular biology. 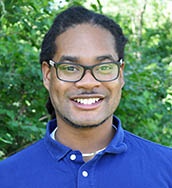 “Rondy studies problems within the challenging intersection of microbial ecology, plant-enemy interactions and global change,” Bever said. “He always approaches science with an open mind and an infectious enthusiasm. His progress has been inspiring.” 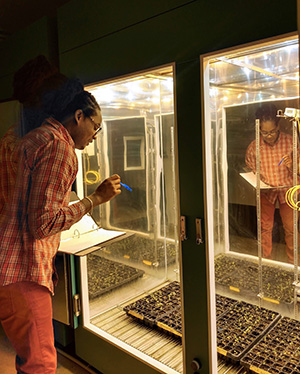 Malik said he was humbled and honored to be included. He expressed appreciation for those who had influenced and motivated him along the way. Those mentors include Bever, his postdoctoral adviser. Bever’s appointment is split between the KU Department of Ecology & Evolutionary Biology and the Kansas Biological Survey, a KU designated research center.

Bever also was Malik’s adviser at Indiana University, where he completed a master’s degree in evolution, ecology and behavior in 2016.

In addition, Malik thanked his doctoral advisers at Penn State, Terry Bell and Dave Eissenstat, and the IMSD (Initiative for Maximizing Student Development) Bridges to the Baccalaureate Program in research training at his undergraduate institution, the University of Massachusetts, Boston. Malik maintains connections with undergraduate training programs there and is routinely invited to speak and help mentor diverse students there.

Malik is a first-generation Haitian American originally from Mattapan, Massachusetts, a neighborhood of Boston. It has the largest Haitian community in the state, with about 18% of residents speaking French and French dialects.

During his time at KU, Malik has participated in Career Day at Marjorie French Middle School in Topeka and shared his journey with students there. He also has worked together with Debbie Baker, an aquatic ecologist at the Kansas Biological Survey, as a guest lecturer in a course she taught at Université Chrétienne du Nord d'Haïti.

“As someone who grew up in the deep inner city, my strategy has always been to block out all the noise and focus on self,” Malik said. “I challenge myself every day to stay committed to a vision of success. Despite the odds, I always like my chances when I put in the work.

“My philosophy reminds me of lyrics to the hip-hop classic ‘Juicy’: ‘You know very well/who you are/Don’t let ’em hold you down/Reach for the stars.’ Also, as someone whose parents are from Haiti, I have no choice but to be resilient.”

He said he hoped in the future to become the principal investigator at the head of an internationally recognized research lab and to mentor students from all walks of life.