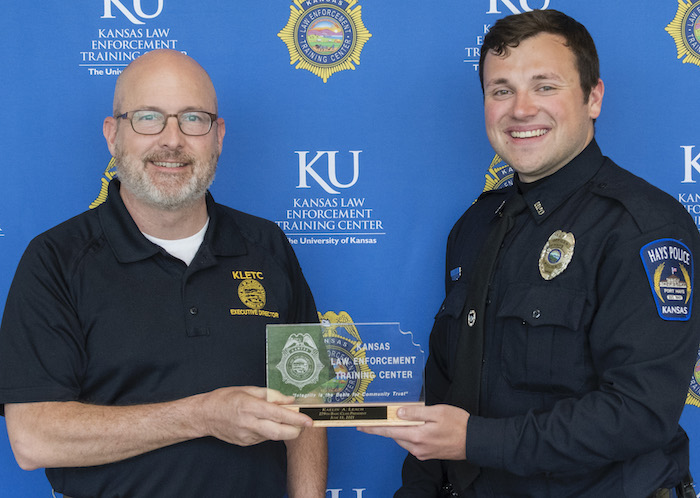 Officer Kaelin Leach of the Hays Police Department was the graduating class president. The speaker for the ceremony was Chief of Police for the Abilene Police Department, Anna Hatter. Steve McCorkill, KLETC senior instructor of police, was the class coordinator for the 279th Basic Training Class.

Officer Nicholas Pate of the Overbrook Police Department received the Welch Academic Award of Excellence for academic achievement. Officer Randall Douvier from the Newton Police Department was recognized during the ceremony for his firearms proficiency as the class’s “Top Shot.” Officer Cassidy Fox from the Leavenworth Police Department walked, ran or biked more than 200 miles during her time at KLETC and exceeded the other physical requirements of the 200 Mile Club, including push-ups, sit-ups and a timed run. Officer Jeffery McKinney from the Abilene Police Department was honored as the student with the most improved fitness since the beginning of basic training.

About 300 officers enroll annually in KLETC 14-week basic training programs. KLETC offers continuing education and specialized training to more than 10,000 Kansas officers each year. KLETC is located one mile west and one mile south of Yoder, near Hutchinson, and is a division of the University of Kansas Lifelong & Professional Education.

The graduates, who began their training in March 2021, represented 19 municipal, county and state law enforcement agencies from across Kansas. Graduates are listed below by county and agency: