LAWRENCE – Sunflower. Meadowlark. Ad astra per aspera. Most Kansans are familiar with the state’s official symbols and motto. But as the summer road trip season kicks into high gear, a new resource from the Kansas Geological Survey invites travelers to dig deeper.

The mobile-friendly “Highways & Byways to Kansas Geology” website leads users on a geological tour of the state’s roadways with a scrolling format known as a story map. It explores what natural features like rock formations, wetlands and colorfully layered roadcuts reveal about the evolution of the ground beneath our feet and the cultural history of the people who settled and passed through the state.

“We were looking for a visual way to showcase the state’s wide-ranging geology and natural resources,” said Cathy Evans, KGS communications coordinator. “By creating a story map, we were able to roll colorful images, maps and narrative text into one dynamic presentation that has the added bonus of being free to anyone with computer access.”

Many travelers have only experienced Kansas as a 75-mph blur while zipping down Interstate 70. What they might not realize is that as they cross the 424-mile route from the state’s eastern to western border, they are traveling forward in time. Rocks that contain 300 million-year-old marine fossils steadily give way to younger layers, ending near a high plains archaeological site where fossils of 13,000-year-old mammoths, camels and bison have been discovered near the surface. 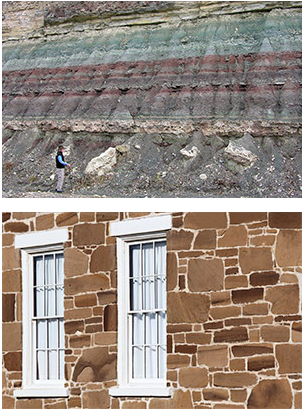 “In between are the limestone and shale layers in the Flint Hills that developed from sediment deposited in intermittent seas about 250 million years ago,” Evans said, “and sandstone in the Smoky Hills formed from sand dumped by rivers draining into a later sea about 66 million years ago.”

For those who venture beyond I-70, more unusual sights await – like the Red Hills that flank U.S. Highway 160 in south-central Kansas. The region’s distinctive, rust-colored mesas, buttes and canyons are more commonly seen in the American Southwest.

Fort Larned National Historic Site on Kansas Highway 156 in west-central Kansas and Point of Rocks – accessible by an unpaved road off Highway 27 in extreme southwest Kansas – are 180 miles apart but linked together by Santa Fe Trail history.

“All the buildings at the fort – which served as an outpost on the Santa Fe Trail – are built from local sandstone, and the view of the surrounding plains is still unobstructed,” Evans said. “Point of Rocks – now appreciated for the expansive view it provides – was once a life-saving landmark towering over the Cimarron River and nearby springs. It signaled the first water source that trail travelers would encounter in more than 100 miles on their 15-mile-per-day journey.”

Funneling that technical expertise into authoritative maps and infographics and combining those with text, images and video for presentations like Highways & Byways is just one way that KGS fulfills its state-mandated mission to foster a better understanding of the geology and natural resources of Kansas.

“Although collection and dissemination methods have changed drastically since the KGS was established in 1889, we continue to produce a wide variety of publications and maps – both technical and educational – for the scientific community, natural resource decision-makers, businesses and the public,” said Rolfe Mandel, director of the KGS. “Story maps are an innovative means of bringing attention to the state’s sights and natural resources.”

“I always find scenic surprises driving backroads or even just by pulling off the interstate,” she said. “Photos I took at the Deep Creek exit on I-70 gave me a whole new perspective of a roadcut I’d driven by hundreds of times – and I actually saw the creek, not just its name on a sign.”

The Kansas Geological Survey is a research and service division of the University of Kansas. Its main headquarters is in Lawrence, and its Wichita office houses the KGS Well Sample Library.

Middle image: Limestone and shale exposed in a Geary County roadcut formed from sediment deposited in shallow seas during the Permian Period about 250 million years ago. Credit: Kansas Geological Survey.

Bottom image: The buildings at Fort Larned National Historical Site on Kansas Highway 156 in west-central Kansas were constructed with Dakota Sandstone quarried nearby. The sandstone layers formed from beach sand and sediment carried by rivers into a sea during the Cretaceous Period. Kansas Geological Survey.