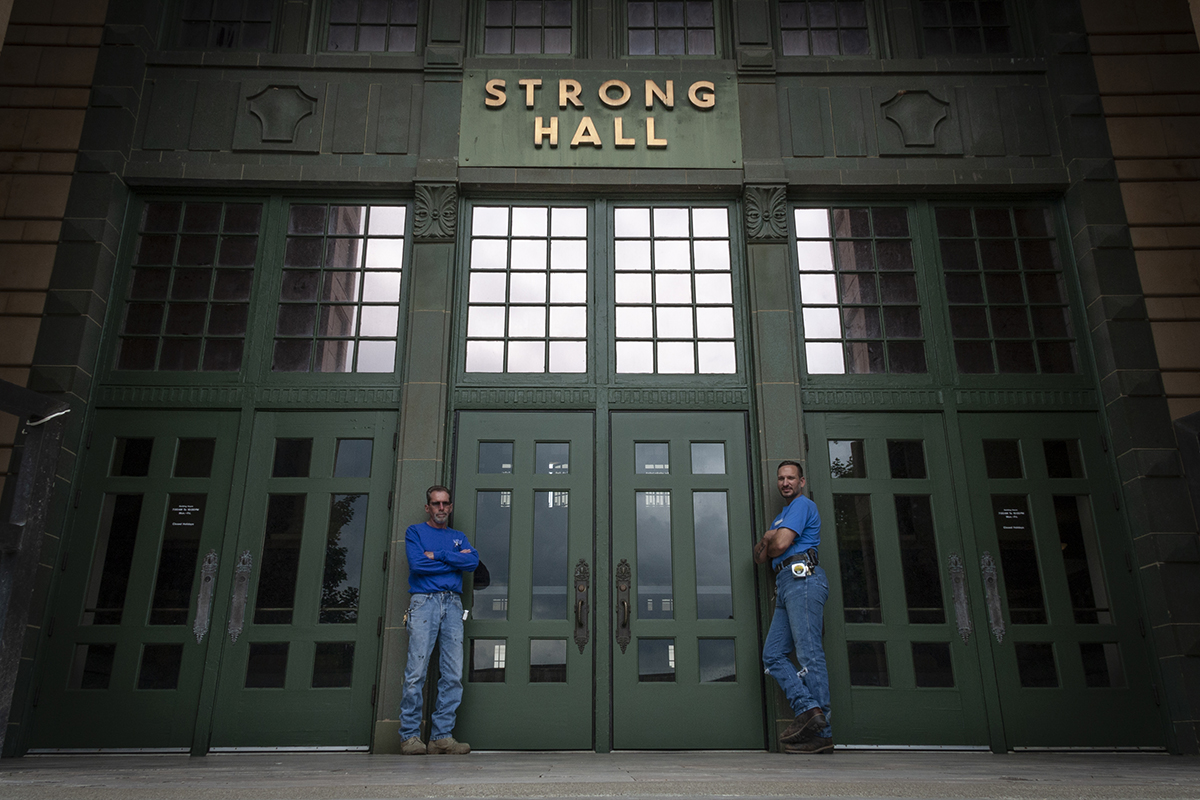 LAWRENCE — The bold, iconic entrance to Strong Hall has been the “doorway to KU” for generations of Jayhawks. The two-story main entrance with its 18 windows and 234 panes of glass stands stalwart as the seasons pass and thousands of students, faculty and staff flow through its historic doors. Those doors, however, had seen better times and were facing imminent failure, said Shawn Harding, University of Kansas facilities director.

“We had been repairing the doors in a number of different ways, but we were running out of options and knew we needed to replace them,” Harding said. 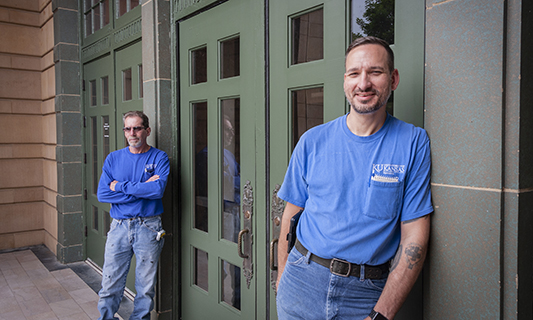 Both the Strong Hall doors and the equally historic doors at the main entrance to Snow Hall were decades old and custom built. The paint peeled from the Strong Hall doors, they were loose on their hinges, and the exterior wood moldings were weather-exposed and decaying. And the Snow Hall doors weren’t in much better shape. Harding sought bids for both buildings, but the price quotes were far beyond what he felt his budget could sustain.

“Since both sets of doors had to be custom to match the existing ones, the bids were very high,” he said. “We even considered putting standard commercial doors on due to the cost of the bids but just couldn’t do that — it would have looked terrible.”

Enter KU carpenter Jeremy Mills and painter Clint Johnston, two employees whose collective work make the physical campus a place to remember. Their typical duties are rarely typical, as their jobs involve repairing the diverse components, large and small, that make up KU buildings. Repairing walls, hanging signage, tuckpointing bricks, trimming in a new window — the work is continual. Sometimes, though, they are handed a project that allows them to use their talent and craftsmanship to breathe life back into the historic campus.

Mills is a kind, self-deprecating man with a buzz cut, wiry frame and deep love of his craft. A carpenter since junior high school with drafting experience to boot, he fills his off hours with carpentry projects of all sizes. A Topekan, he has made the early morning trek to campus each workday for the past 13 years, often arriving before 7 a.m.

Asked what his usual duties entail, his response leans heavily on understatement, even as it is delivered with a slight laugh. “I’m a glorified maintenance guy,” Mills said. “I do whatever they tell me to.”

Many who know Mills, though, translate this quote as a sign of his dedication to his work and to the KU campus.

This dedication is something Johnston shares. His chiseled, sinewy frame shows the years of work he’s given to the preservation of KU’s campus infrastructure. A master matcher of paints, stains, coatings and treatments, Johnston has called KU home for the past 16 years and echoes Mills’ sentiments: the work varies and sometimes isn’t the most glamorous, but every now and then a real chance to demonstrate his prowess comes along.

Harding has worked with both Mills and Johnston for the past five years, and describes both as excellent employees, noting they have each been selected as Employee of the Month in the past. It is clear one of their top skills is initiative.

“Once our guys saw what we were working on, they jumped right in and wanted to do this for the university,” Harding said. “They knew they had the talent to get it done right, and we had confidence in them.”

The actual project was a complete reconstruction, not a restoration, Mills said, and both he and Johnston used their skills and attention to detail to produce a finished product that is something to behold. The Strong doors required 45 hours of build time, 55 total when including installation, glass work and finishing. The Snow Hall doors took 60 hours to build, 75 in total when including finishing.

“As far as building the doors, Jeremy was definitely the lead,” Johnston said. “And as far as finishing goes, Jeremy has a good eye, but I led that side of things.”

Johnston praised his partner’s skill in woodworking, noting that Mills had to soak the Snow Hall glass moldings in water and bend them carefully to match them to the original curvature. Such was the level of effort required.

Mills spent hours drafting plans — a skill he acquired in high school — and preparing the materials lists. The Strong Hall doors are solid stain-grade pine and were originally a hemlock or Douglas fir. The new Snow Hall doors are oak, as were the original doors.

“You can see the new doors are 100% authentic,” Mills said. “No nails, no screws. They are tongue and groove.”

Asked how he enjoyed the job, he said, “I loved it.” Mills said it was nice to get to do some design work, something that allowed him free rein.

“Since junior high I’ve been a guy who likes to build things that make people go ‘wow.’”

Johnston spent hours himself even before he put brush to wood. To correctly match the original colors on the Strong Hall doors, he took the time to visit the Spencer Research Library archives to hunt down color imagery that could provide him a starting point. Working from images, he had to make more than one attempt to land on a color that the KU community would feel matched their memories of the entrance. For the Snow Hall doors, he was left with scraps to stain through trial and error — trying different shades until he found the right one. A tedious job, but one he was more than happy to do.

In the end, Johnston is not only proud of the work itself, he’s proud of the real-world implications it has on KU’s budget, noting his and Mills’ efforts saved the university “thousands and thousands of dollars.”

Mills did more than “some design.” And Clint did a lot more than “just paint.” And, the two, working together, did much more than install new sets of doors. The doors have the weight of history to them, even though they are brand new. There is a perfect balance to them, and they are fully incorporated into the spirits of these unique and historic buildings. They swing true, landing with a soft shush in their jambs. Like many expertly made things, they are almost unnoticeable, yet upon study they demonstrate a beguiling simplicity that, to a trained eye, shows a painstaking amount of care went into them. The doors are a reminder that place and history matter and remain with us, even as the seasons change and each new generation of Jayhawks stands at the threshold, ready to open doors of opportunity at KU.

— Stories and photos by Haines Eason, Office of the Provost.